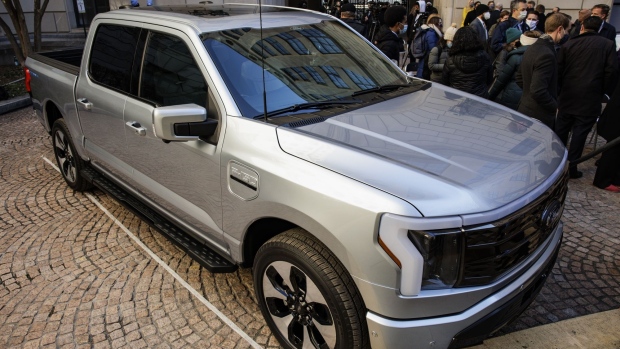 It wasn’t that long ago that the conventional wisdom on electric pickup trucks is that they weren’t quite up to the task of work duty. Heavy and expensive batteries would make it difficult to tow big payloads. The outsized cost of electric vehicles would be beyond what contractors and budget-minded fleet owners would pay.

No matter. The electric age for work trucks is getting underway. Judging from the plans automakers have and the prices they will be charging for their first battery-powered pickups, they are targeting the job site more than the country club parking lot. (It’s pretty easy to find a luxe pickup these days selling close to $70,000.)

GM and Ford have managed to bring prices of plug-in pickups down to the point where a contractor or fleet customer can buy them. Both pickups start at just under $40,000. The Cybertruck also will supposedly be priced there, but knowing how Tesla pricing has worked, they typically sell for much more than the company claims.

Ford’s F-150 Lightning goes on sale in May. It’s basically the existing truck with a 300-mile battery pack retrofitted in. That makes it stylistically the same truck that sells very successfully to fleet and commercial customers. The Silverado work truck will be out of the gate first for Chevy — in Spring 2023 — before the more pricey trucks for retail customers hit the market. Chevy is betting that larger fleet customers will want the zero-emission trucks for ESG (environment, social, governance) compliance and bragging rights.

Gasoline prices are hovering around $3.30 a gallon nationally, according to AAA. That’s $1 more than it was this time last year. Fleet buyers may not take road trips where they need maximum range, but they do crank out a lot of miles running their pickups to different jobs all day — they burn a lot of gasoline. An electric pickup could mean substantial savings.

These trucks are increasingly able to tow. Chevy is planning an electric truck that can pull 20,000 pounds. That’s a bit more than the large and brawny HD version of the truck. One big question is whether towing will run the battery down rapidly. Chevy Marketing director Steve Majoros said that GM’s testing shows that hauling trailers and other freight doesn’t run the battery down any faster than it burns up more gasoline for the same duty in today’s internal-combustion trucks.

Oh yeah, there’s one more thing driving the push into electric work trucks. Regs. California’s proposed Advanced Clean Fleet regulations would require fleet owners start to add zero-emission trucks starting in 2024, with a goal of 100% ZEV trucks by 2040. If truck customers have to buy them, automakers need to make them. California’s rules have typically forced automakers to go green. Their customers may soon have the same pressure.

All of that will make it easier to sell e-pickups. By 2025, automakers will collectively be building a projected 476,000 plug-in trucks a year, according to AutoForecasting Solutions. Given that fleet customers buy about that many of the 3 million pickups sold in the U.S. every year (not counting the small businesses who buy five trucks a year at retail), I’m thinking the work truck is going to drive us into the electric age.