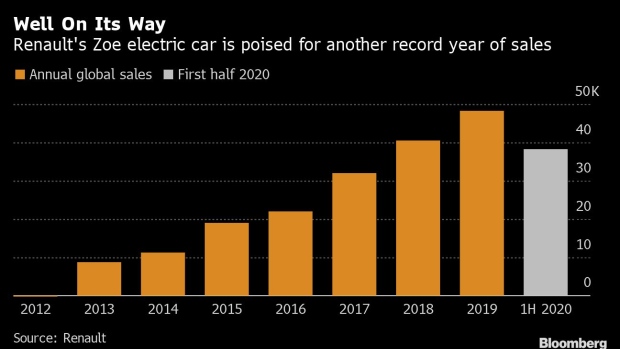 (Bloomberg) -- Renault SA delivered quite the shock in its sales figures this week to anyone who had only paid attention to Tesla Inc.’s stock chart. The French carmaker’s all-electric Zoe out-muscled the Model 3 as Europe’s best-selling electric vehicle in the first half of the year.

This little subcompact, which starts at 32,000 euros ($37,000), has come a long way from a day back in 2009 when Carlos Ghosn, then the head of Renault SA, first unveiled a concept version at the Frankfurt motor show. It was touted as the ideal second car for families and the dawn of the manufacturer’s shift toward clean cars that wouldn’t warm the planet.

The Zoe started plodding along three years later. A couple of reboots and redesigns slowly raised its profile with consumers. Then, within the past year, something clicked. At almost 38,000 unit sales in Europe during the first six months of 2020, the four-door hatchback bested Tesla’s Model 3, Volkswagen AG’s electric Golf and Nissan Motor Co.’s Leaf.

“It’s basically the same car that’s been around for a long time,” albeit with some improvements in range, technology and design, said Felipe Munoz, an analyst at auto industry research firm Jato Dynamics. “So the latest success is a bit surprising.”

It’s not quite as astonishing when considering  the incentives now available to car buyers who are willing to go electric in France and Germany. The French government is offering as much as 7,000 euros toward the purchase of an electric car, and a cash-for-clunkers program can add another 5,000 euros in subsidies. Germany is offering incentives of as much as 9,000 euros per vehicle.

But what about the car itself? Renault’s car-sharing service offers up a basic older model for test-driving around Paris to gauge comfort, maneuverability and range.

The motor is reactive—almost too much so when trying to squeeze into a tight parking spot—and provides more than enough pick-up for city driving, even when careening around the city’s notorious Arc de Triomphe roundabout. The large touch screen is loaded with tools that navigated through some busy neighborhoods in the French capital and mapped out charging stations. The interior styling felt outmoded with a drab black color scheme, classic lines and a manual dial for temperature control. Space isn’t an issue—it felt roomier than the exterior let on. While it would be a tight fit even for three small people in the back, it’s pretty comfortable up front for two. The seats can’t be adjusted for height and the shifter was a little clunky, but the ride was smooth.

When the Zoe was rebooted last year, reviewers found it to be similar to the outgoing version, albeit packing more range and power, better braking and a cosmetically improved interior. Speeding up and down a wide Parisian avenue, even the older model responded well to acceleration and sudden braking when a taxi abruptly cut in front of the car.

While the Covid-19 pandemic did for a time reduce traffic in the world’s densest cities, street congestion is building back up again. The Zoe works well in urban centers because of its narrow, boxy shape and maneuverability.

The Zoe’s almost 50% jump in first-half European sales was the only bright spot in Renault’s otherwise-gloomy numbers. The carmaker, which is slashing costs, obtained a 5 billion-euro state-backed credit facility to make it through the coronavirus pandemic.

Competition has now arrived, with VW’s long-awaited ID.3 starting sales this week at about 38,000 euros. And PSA Group is promoting two new electric models, the Peugeot 208 and the Opel Corsa. “The ID.3 will be better from a technological point of view, closer to the Model 3,” said Bloomberg Intelligence auto analyst Michael Dean, predicting that the Zoe could fall behind.

Renault is more upbeat and feeling some degree of justification so many years after the car first hit the market.

“Our electric offensive is working very well,” said Denis le Vot, Renault’s head of sales and marketing, pointing to the new electric version of the Twingo city car coming on the market and plans for hybrid versions of existing larger models. “Renault’s lineup still holds lots of surprises for the second part of the year.”