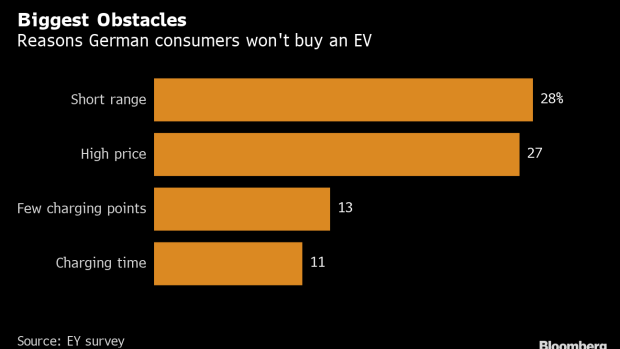 (Bloomberg) -- It only took a decade for traditional automakers to take electric cars seriously and offer more than a smattering of test-the-water models.

Now comes the hard part: Getting consumers to buy them.

At Frankfurt’s 2019 car show, Volkswagen AG Chief Executive Officer Herbert Diess laid it on thick, calling on governments to give up coal-fired power as he unveiled the electric ID.3 car-for-the-masses. At the Mercedes-Benz stand, where the Daimler AG brand was showing the prototype of an electric S-Class sibling, real beech trees framed massive screens displaying schools of digital fish.

The message to environmentally conscious consumers: we’re with you. But a marketing blitz alone won’t wash away the deep uncertainties facing electric cars -- obstacles little changed since carmakers’ initial forays with models like the Nissan Leaf and BMW AG i3. Customers don’t like paying up for new technology they’re unsure about, and they’re worried they won’t reliably get to where they want to go.

So far, electric cars have only proliferated in countries with significant sweeteners. Once they go, sales of battery models crater. Demand in China, the world’s biggest electric car market, fell 16% in August -- its second straight decline -- after the government scaled back subsidies. Carmakers can reduce prices, but then only cut into profitability that in most cases has been nonexistent.

Consumers are similarly sensitive elsewhere. Demand in Denmark collapsed when the government phased out tax breaks in 2016.

“We’ve been talking about EVs for years, but this year the real production cars showed up,” Max Warburton, an analyst at Sanford C. Bernstein, wrote in a note. “Should we be celebrating these cars, given the poor margins that most will have?”

Across Europe, sales of new plug-in hybrids and fully-electric cars last year made up 2% of total registrations. That’s a tiny market to tussle over for the likes of VW’s ID.3, with a price point below 30,000 euros ($33,009), Tesla Inc.’s Model 3 and Mercedes’s gleaming lineup of plug-ins. Yet carmakers have little choice but to boost their offering to keep pace with regulation, or face fines.

Consumer demand “can’t be mandated,” Daimler CEO Ola Kallenius said at the show. Mercedes-Benz is adding at least 10 purely battery-powered cars through 2022 at a cost of more than 10 billion euros, starting with last year’s EQC SUV, so the carmaker’s lineup can to meet stricter emission limits.

A lot of factors are moving in the right direction. The ID.3’s price point and basic range of 330 kilometers (205 miles) sets the car apart from previous efforts that needed meticulous pre-planning for longer trips. At the top end, there’s now the $185,000 Porsche Taycan Turbo S, and a mid-range that’s rapidly filling out from SUVs like the Jaguar I-Pace and Audi e-tron.

Patchy charging infrastructure is improving too. Ionity, a consortium of Daimler, VW, Ford Motor Co., BMW and now Hyundai Motor Co., is on track to finish building a network of 400 European fast-charging stations by next year to make long-distance travel easier.

For carmakers, this will mean some lean years -- at least to 2025 when battery prices are expected to come down -- during which lucrative conventional SUVs must subsidize poor returns from their electric cousins. VW will need “patience” until the ID.3 brings significant profit “joy,” Chairman Hans Dieter Poetsch said.

To bridge the gap, the industry is lobbying hard for governments to step up incentives to get to the oft-cited tipping point where driving without a combustion engine becomes normal. In Germany, home to VW, Mercedes and BMW as well as world-leading suppliers like Continental AG, the government sits down next week to discuss broad climate measures. Carmakers are hoping for a bigger slice of subsidies than they got so far.

The ACEA on Wednesday called on national governments to boost charging points in Europe to 2.8 million by 2030, a 20-fold increase from 2018.

“We need strong support, because if we don’t do it,” simply offering electric cars won’t be enough for sales to take off, PSA’s Tavares said.

To contact the reporters on this story: Oliver Sachgau in Munich at osachgau@bloomberg.net;Christoph Rauwald in Frankfurt at crauwald@bloomberg.net

To contact the editors responsible for this story: Anthony Palazzo at apalazzo@bloomberg.net, Elisabeth Behrmann