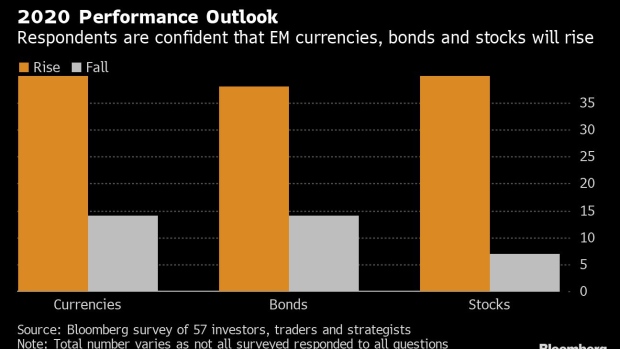 Motorcyclists on a flyover travel past the Exchange TRX precinct construction site shrouded in smog in Kuala Lumpur, Malaysia, on Wednesday, Sept. 11, 2019. Malaysia closed more than 400 schools, citing unhealthy air quality as smoke and ash from raging forest fires in Indonesia spread to more areas in countries from Thailand to the Philippines. Photographer: Samsul Said/Bloomberg , Bloomberg

(Bloomberg) -- Emerging markets are about to embark on another year of wealth creation after adding $11 trillion to investor portfolios in the past decade.

Developing-nation assets will outperform their developed peers, with Asia having the best prospects, according to Bloomberg’s survey of 57 global investors, strategists and traders on their outlook for next year. Total wealth in emerging-market stocks and bonds now exceeds $25 trillion, bigger than the economies of the U.S. and Germany combined.

The U.S.-China trade dispute that dictated market moves throughout 2019 will remain the biggest driving force, while China’s growth outlook eclipsed Federal Reserve monetary policy to be the second-most important factor. After a wave of global easing led to more than $11 trillion in negative-yielding debt, the haven pile will be less of a focus as some central banks enter holding patterns from easier monetary policies.

All emerging-market assets -- currencies, stocks and bonds -- are making a comeback this year after posting their largest losses in three years in 2018 as the Fed led global central banks in cutting benchmark rates to support flagging growth. Russia’s ruble, the best-performing emerging currency so far this year, overtook the Brazilian real to become the top pick in 2020, while Indonesia was the most favored for both bonds and stocks.

The combined equity values of 26 nations listed by MSCI Inc. as developing markets increased by $6.6 trillion since the end of 2009, according to data compiled by Bloomberg. Meanwhile, Bloomberg Barclays bond indexes that cover a larger swathe of emerging economies show that local-currency bonds added $2.9 trillion, U.S. dollar bonds added $1.7 trillion and euro-denominated securities added $237 billion during the period.

Below are the results of the Nov. 26-Dec. 5 survey. Click here to read the previous poll, and here is what we predicted for 2019.

Asia maintained its top position for currencies and stocks, while Latin America, which was plagued by a rise in political unrest this year, overtook Asia for bonds. Europe, the Middle East and Africa was the least favored for bonds and equities, but moved one notch up for currencies.

Respondents were also asked about the outlook for inflation, monetary policy and economic growth across 12 emerging markets:

To contact the reporters on this story: Yumi Teso in Bangkok at yteso1@bloomberg.net;Marcus Wong in Singapore at mwong547@bloomberg.net;Selcuk Gokoluk in London at sgokoluk@bloomberg.net