The end of the bonus culture is coming to Wall Street

Chris Purves has been at the cutting edge of markets for more than a decade – from algorithmic trading to machine learning.

Now the head of UBS Group AG’s Strategic Development Lab is turning his focus to the human survivors of the tech invasion, persuading them to understand things will never be the same. They’re going to have to -- in the jargon of Silicon Valley’s missionaries -- “unlearn” how they’ve always operated.

It’s not just that their software may know their next move before they do. The extinction of an entire way of life is looming, as Purves sees it: the end of the bonus culture. Compensation will be a last frontier in the onslaught of technology on finance.

He’s moving traders toward electronic systems as the era of legendary gamblers stalking the markets in search of the US$100 million payday becomes a distant memory. What’s coming is increased bureaucratization, an evolution that renders individuals’ judgment less important -- and with it the need to reward them as they might have once expected.

“We want to hire people who are less driven by their own bonus and P&L and more by the long-term goal of what the market will look like in say 10 years,” said London-based Purves. “The idea that you are responsible for your own destiny has gone. It’s a team sport now.”

The moves in that direction are only accelerating. Coders have been handed licenses to trade equities at JPMorgan Chase & Co. while they’re the focus of the biggest hiring spree in years for Goldman Sachs Group Inc.’s trading division. Citigroup Inc. plans to recruit 2,500 programmers this year.

The competition for talent with companies like Google and Facebook Inc. hasn’t caused a surge in banker bonuses. And while tech skills are still in high demand, that doesn’t always translate to more compensation. Most trader payouts are forecast to remain steady or decline, according to an analysis by recruiting firm Options Group.

Even as demand for quantitative skills “showed no sign of letting up” last year, pay for these roles will probably stay flat, Options Group projected. For example, an equities managing director in a financial engineering role can expect to earn US$570,000 to US$775,000 a year, while associates are forecast to earn about US$140,000 to US$190,000.

To be sure, post-crisis culture and weaker trading revenues have already put a dent in bonuses. Wall Street’s average bonus fell for the first time in three years in 2018 to US$153,700, according to the most-recent estimates by the New York State Comptroller.

But it’s not just about the amount of compensation reducing. Bonus culture is now at stake -- with tech platforms center stage, traders may no longer be paid on an “eat what you kill” model, but will have their bonuses determined more by the strength of a broader desk or unit.

“Good traders used to be easily identifiable,” said Tim Hall, who spent more than 20 years in banking including at Credit Agricole SA and ING Groep NV. “Now trading is very commoditized and you’re being replaced by platforms and robots and people with different skillsets.” 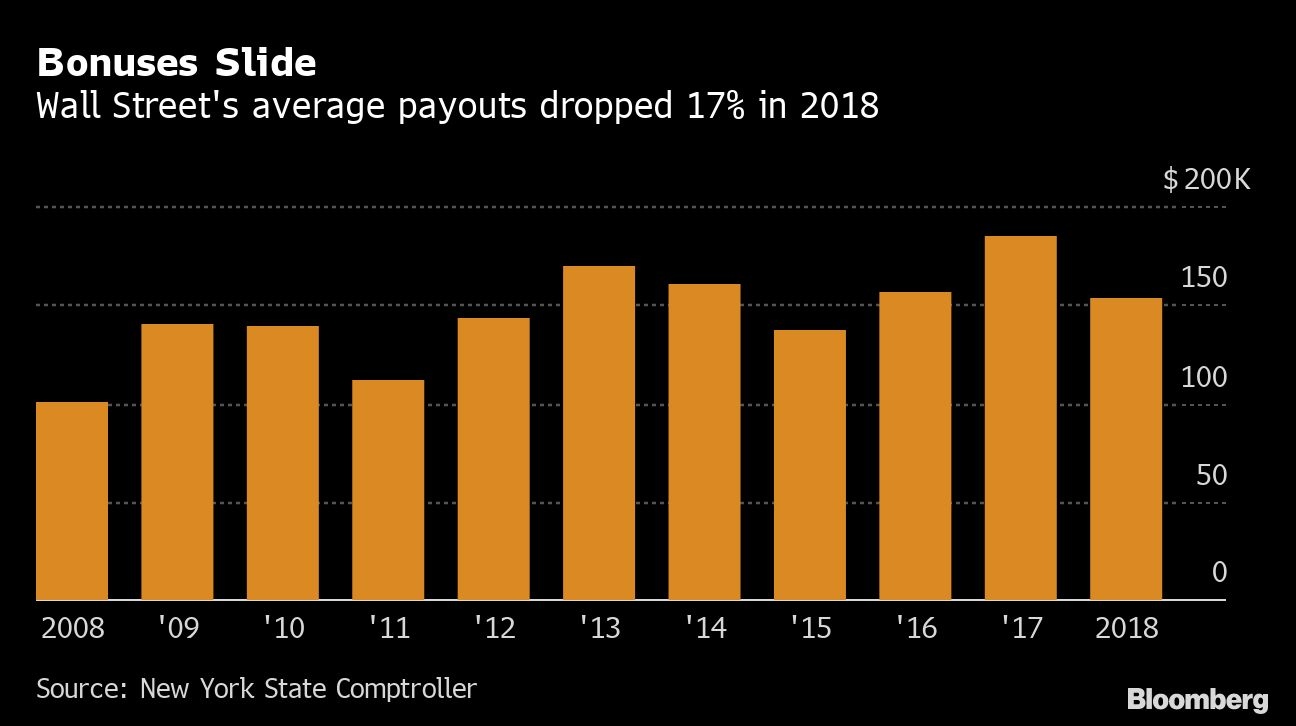 The mismatch between skills and demands is putting even the industry’s highest-paying jobs at risk, says Marcos Lopez de Prado, the former head of machine learning at the hedge fund AQR Capital Management LLC and now a Cornell University professor. Many of the 6.1 million people employed in finance and insurance will lose their jobs “not necessarily because they are replaced by machines, but because they are not trained to work alongside algorithms,” he told the U.S. House Committee on Financial Services in December.

Traders have no choice but to adapt to the new environment. Automation could cut headcount for Wall Street and the banking industry by 200,000 in the next decade, estimates Mike Mayo, senior bank analyst at Wells Fargo Securities. Almost one-third of financial-services jobs could be displaced by the mid-2030s, according to a report by PricewaterhouseCoopers LLP in 2018.

“Some of the changes coming in with tech can make people feel uncomfortable, like it’s moving too fast and they’re falling behind,” said Niall Cameron, London-based head of corporate and institutional digital at HSBC Holdings Plc which has designed bots to help salespeople respond to clients. “That is unfortunately here to stay because these trends are only getting stronger.”

Investment firms are also turning to machines to cut costs amid the boom in passive investing. Janus Henderson Group Plc replaced two fund managers with more than a decade of markets experience with a new quantitative team of four in May. New York-based PineBridge Investments, with almost $100 billion of assets, is also focusing on quant skills, leading its existing traders to be nimble.

Chris Perryman, senior vice president of fixed-income trading at PineBridge in London, adapted to survive. Four years ago he moved to a management role and helped hire two university graduates in their 20s to apply a quant approach to trading.

“Ten years ago I could be a good trader, now I couldn’t,” said Perryman. “I don’t have a quant background and that’s 50 per cent of the job now. You need quant skills to handle, organize and rationalize the amount of data that’s available.”

Roosevelt Bowman, who traded bonds at Lehman Brothers back in 2008, learned to code as the firm collapsed. More than a decade later and now senior investment strategist at AllianceBernstein Holdings LP’s private wealth-management division, he uses programming languages such as R and Python regularly in his job in New York.

At UBS, Purves is spearheading an effort to digitize the investment bank’s trading of fixed income and equities and as part of that he went on a course with Silicon Valley’s Singularity University to learn how experienced bankers can evolve and stay relevant. When it comes to new hires, Purves says, the best candidates are those that have the least to “unlearn.” They are team players with computer science skills who are often new to banking, he said.

Jack Miller, head of trading for Robert W. Baird & Co. in Milwaukee, agrees. For the first time last year, he included proficiency in coding as a requirement for a junior trader job, but hasn’t found anyone yet with the right mix of technical and people skills.

As investors increasingly track indexes rather than actively managing their investments, it’s another example of how machines are curbing the amount of money that individuals can make. The shift to passive investing means that individuals and institutions have low-cost alternatives to traditional asset managers, who’ve responded by cutting expenses, Miller said.

“There is a trickle-down effect that puts pressure on the overall pool of comp available to the sell side,” Miller said. That’s “driven by the buy side being much more cost sensitive.”

--With assistance from Sonali Basak.