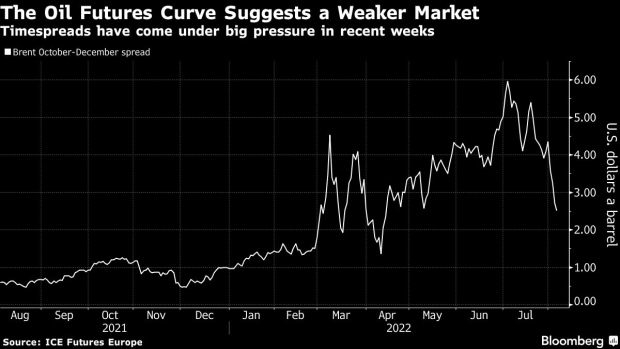 (Bloomberg) -- Europe’s oil market, for months the center of a global supply panic, is finally showing signs of weakening as the return of supply from Libya helps to soothe trader anxiety.

Alongside the US releasing 1 million barrels a day of strategic reserves and oil refineries approaching a period of seasonal maintenance, a sharp increase in supply of light-low sulfur crude from Libya has taken the heat out of a market that was pricing the tightest supply conditions since futures began trading.

The impact is being felt across both physical crude markets and in futures, which are also getting relief from a wider pickup in global oil flows and the risk of a looming recession. If it continues, it could take the pressure off fuel prices and help to ease the fastest rate of global inflation in decades.

At the end of July, crude from Azerbaijan was being offered at a premium of more than $12 over Dated Brent, the marker against which it and many other grades around the world trade. By this week, it was just $1.75 higher.

It’s the same picture for timespreads -- gauges that reflect perceptions of short-term supply and demand. For the global Brent benchmark, a record near-term backwardation of more than $6 a barrel last week has collapsed to just $1.50.

There are signs a summer peak might be over in the US too.

At the same time, stockpiles at the key storage hub of Cushing, Oklahama have risen for five weeks in a row, while gasoline consumption is below where it was at this time in 2020.

Light sweet crudes tend to make more light refined products such as gasoline and naphtha. Weakness in both of those markets has also taken some of the sting out of a crude market that, earlier in the year, was being driven by red-hot margins.

There’s plenty of scope for the pullback to prove temporary, driven in part by seasonal refinery maintenance that tends to get underway in September. It’s also somewhat reliant on Libyan politics remaining stable, which isn’t currently the case.

Then there’s the matter of a European Union crude embargo on Russia that will come into effect later this year, and risks tightening supply again.

The US strategic reserve releases are also set to end in October, which, if not renewed, would effectively take 1 million barrels a day off the market at a time when supplies could be set to get tighter.

“The other way of looking at it is wow, we’re at $90 with a million barrels a day of SPR release,” said Paul Sankey, founder of Sankey Research LLC. “The front month is being attacked by the SPR in a very big way. What happens when we get China back, and then the SPR has to turn off. I think post the midterms, that really sets up for a very powerful 2023.”

For now, though, physical crude prices are cooling.

Forties crude, a grade in the North Sea market that helps set the Dated Brent price, this week traded at a two-month low. A cargo of Angola’s Dalia crude is being offered at a discount to its benchmark, versus a premium last month.

Cargoes of Texas’s flagship WTI Midland crude for November arrival into Asia this week were offered around $7 a barrel lower than last month, according to traders who asked not to be identified.

The softening shows up in backwardation for the nearest West Texas Intermediate contracts, which fell below $1 for the first time since April. Spreads for the rest of 2022 have also slumped.

“There is no spread that is at superbackwardation levels,” said Keshav Lohiya, founder consultant Oilytics. “Nothing is eye-popping anymore. The oil markets have come to a normal state, which is surprising given what is happening around the world.”