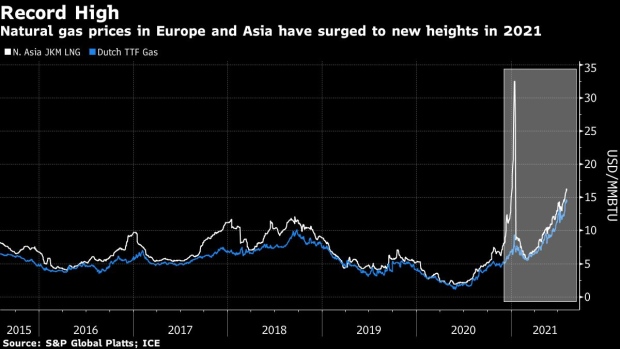 (Bloomberg) -- The era of cheap natural gas is over, giving way to an age of far more costly energy that will create ripple effects across the global economy.

Natural gas, used to generate electricity and heat homes, was abundant and cheap during much of the last decade amid a boom in supply from the U.S. to Australia. That came crashing to a halt this year as demand drastically outpaced new supply. European gas rates reached a record this week, while deliveries of the liquefied fuel to Asia are near an all-time high for this time of year.

With few other options, the world is expected to depend more on cleaner-burning gas as a replacement to coal to help achieve near-term green goals. But as producers curb investments into new supply amid calls from climate-conscious investors and governments, it is becoming apparent that expensive energy is here to stay.

“No matter how you look at it, gas will be the transition fuel for decades to come as major economies are committed to reach carbon emission targets,” said Chris Weafer, chief executive officer of Moscow-based Macro-Advisory Ltd. “The price of gas is more likely to stay elevated over the medium-term and to rise over the longer-term.”

By 2024, demand is forecast to jump 7% from pre-Covid-19 levels, according to the International Energy Agency. Looking further out, the appetite for liquefied natural gas is expected to grow by 3.4% a year through 2035, outpacing other fossil fuels, according to an analysis by McKinsey & Co.

Surging natural gas prices means it will be costlier to power factories or produce petrochemicals, rattling every corner of the global economy and fueling inflation fears. For consumers, it will bring higher monthly energy and gas utility bills. It will cost more to power a washing machine, take a hot shower and cook dinner.

It’s especially bad news for poorer nations like Pakistan and Bangladesh that reworked entire energy policies on the premise that the fuel’s price would be lower for longer.

European natural gas rates have surged more than 1,000% from a record low in May 2020 due to the pandemic, while Asian LNG rates have jumped about six-fold in the last year. Even prices in the U.S., where the shale revolution has significantly boosted production of the fuel, have rallied to the highest level for this time of year in a decade.

While there are several one-off factors that have pushed gas prices higher, such as supply disruptions, the global economic rebound and a lull in new LNG export plants, there is a growing consensus that the world is facing a structural shift, driven by the energy transition.

A decade ago, the IEA declared that the world may be entering a “golden age” of natural gas demand growth due to historic expansion of low-cost supply. Indeed, between 2009 and 2020, global gas consumption surged by 30% as utilities and industries took advantage of booming output.

Countries championed gas as a way to quickly reduce their carbon footprint. The shift to natural gas can be done relatively quickly with limited deployment of capital, while having a significant impact on lowering emissions, according to James Taverner, an analyst at IHS Markit. Natural gas is the cleanest burning fossil fuel, and emits almost 50% less CO2 than coal. Meanwhile, non-fossil-fuel alternatives such as wind and solar are at a relatively early stage in the energy transition.

Demand isn’t showing any signs of slowing down.

Utilities in Europe are switching to the cleaner-burning gas due to sky-high carbon prices, South and Southeast Asian governments are planning dozens of new gas-fired plants to meet greater electricity needs, and China is poised to depend more on gas than ever as it seeks to peak coal consumption.

Ordinarily, robust demand would encourage a rush of investment in fresh export facilities. But a big factor in higher gas prices is a lack of fresh capital to increase supply. Growing anti-gas sentiment and heightened scrutiny of dirty methane emissions has stalled projects and forced energy majors to rethink plans. The IEA, which heralded natural gas as a bridge fuel to a low carbon future, drew widespread attention earlier this year when it said investments in new upstream fields need to stop if the world wants to hit net-zero emissions by 2050.

Without new investment, LNG consumption in Asia -- the engine for future gas demand growth -- will outstrip supply by 160 millions tons in 2035, according to Gavin Thompson, Asia-Pacific vice chairman at Wood Mackenzie Ltd. For comparison, Asia imported about 250 million tons of LNG last year.

Already, there are signs around the world that supplies will fall short:

Mark Gyetvay, the deputy chief executive officer of Russian LNG exporter Novatek PJSC, warns that the green movement could disrupt the delivery of adequate and affordable supply to consumers.

“The lack of capital investments in future natural gas projects does not lead us to an energy transition, but instead leads us down an inevitable path toward an energy crisis,” said Gyetvay.