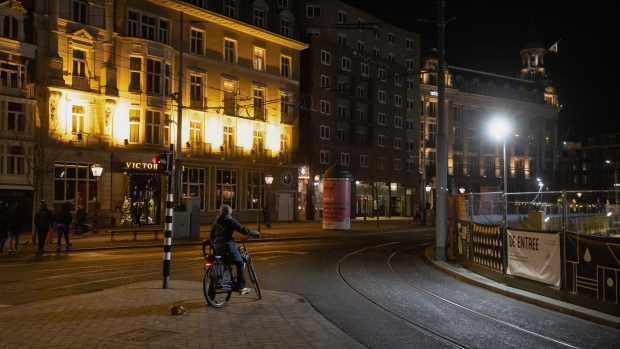 A quiet street at night during the introduction of lockdown measures in Amsterdam, on Dec. 21, 2021. Photographer: Peter Boer/Bloomberg , Bloomberg

(Bloomberg) -- The European Union may increase bond issuance to finance its recovery from the pandemic in the second half of this year.

The bloc plans to sell 50 billion euros ($56 billion) of so-called NextGenerationEU bonds in the first six months of 2022, and potentially “a little bit more” in the second half, Budget Commissioner Johannes Hahn told reporters in Brussels on Tuesday.

The EU is on track to raise around 150 billion euros a year by 2026 as part of its recovery program, which finances grants and loans to member states. It has already issued 73.5 billion euros of such bonds, according to European Commission data.

“We are still facing a very positive reaction at the capital market, there is strong interest,” Hahn said, after a trip to Saudi Arabia and United Arab Emirates this month to promote the bonds. “We have now established all the different elements, not only syndicated issuances, but also auctions. We have these short term EU bills, which helps us also to meet all the necessary requirements.”

Hahn said he expects disbursements to member states to peak next year and the year after. The short-dated EU bills give the commission “some leeway to act in case we need on a very short notice more than currently calculated,” Hahn said.

The EU raised 2.5 billion euros in its first green auction yesterday, following its debut 12 billion-euro green bond sold via syndication in October. That drew record demand and was the biggest-ever deal in the burgeoning market for sustainable debt. About 30% of the recovery funds will be for environmental projects, making it the largest green issuer.

“We have different possibilities, and depending on the circumstances, it’s up to our experts which kind of measure is chosen for the next issuance,” Hahn said.