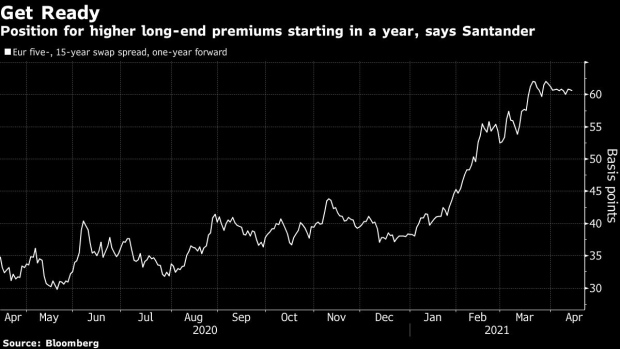 Exchange rates including British pound to euro currency are displayed in the window of a currency exchange store in Brussels, Belgium, on Wednesday, Jan. 16, 2019. “There is not an awful lot to say today because we don’t know what our British friends are going to do after the vote in Parliament yesterday,” Margaritis Schinas, spokesman for the European Commission, told reporters in Brussels. Photographer: Yuriko Nakao/Bloomberg , Bloomberg

(Bloomberg) -- A sudden rebound in the euro and a selloff in bond havens are forcing investment strategists to play catch-up on rising expectations for European growth.

As the currency climbs toward $1.20, the likes of Goldman Sachs Group Inc. worry their projections for the months ahead look too gloomy. Meanwhile, BNP Paribas, Pictet and Manulife Investment are predicting German bond yields will turn positive by December for the first time in two years.

Just weeks ago, the euro was mired in its worst start to the year since 2015, dogged by stubbornly high Covid infections and the European Union’s fumbling of its vaccination program. The yield on German 10-year bonds, the region’s go-to haven, was at its deepest discount to its U.S. counterpart in more than a year.

Now, the EU’s rollout of immunizations is getting into gear with a renewed drive to cover the bulk of its population within a few months. Meanwhile, data is turning positive and last week saw a robust climb in factory orders for Germany, the region’s biggest economy.

The recovery in the single currency is set to continue, according to Charles Diebel a money manager at Mediolanum who says it could reach $1.25 by year-end.

“The euro has been an underperformer against the dollar and a sterling laggard in terms of vaccine rollout,” he said “But those dynamics are shifting now, and with good news already in place in the U.S. and the U.K., Europe is catching up.”

That optimism is also rippling into the bond market, squeezing German 10-year debt. Bund yields have climbed 30 basis points from this year’s low to minus 0.29% and Goldman Sachs sees them rising to 0%. BNP Paribas predicts 0.2%, the highest level since early 2019.

“The pace of vaccinations in Europe should ramp up soon,” said Chris Chapman, a portfolio manager at Manulife Investment, who also expects the the yield to break into positive territory by year-end. “The re-opening of the economy and the catch up of the services sector will drive growth.”

But with Covid infections still rising in much of Europe and just just 11% of the EU population vaccinated, that optimism is far from universal.

Bank of America Corp. strategist Sphia Salim sees bund yields ending the year at -0.25%, though she concedes the bank’s economists are more bearish than the consensus on growth and inflation. HSBC’s Chris Attfield predicts -0.5%, saying most of the good news is already priced in.

Meanwhile, in an ominous sign for those placing bullish bets on the recovery, so-called speculative investors -- mainly hedge funds -- have cut long euro positions to the lowest in a year, according to Commitments of Traders data. The median year-end outlook for the euro among analysts contributing forecasts to Bloomberg remains at $1.22.

Many traders are wagering on a stronger euro, however. Options betting on gains against the dollar trade at a premium over those looking for declines across tenors out to six months. Against sterling, that premium stretches to one year. Meanwhile, analysts are revising their end-2021 forecasts for German 10-year yields by the most in more than a year.

Goldman Sachs says the biggest four euro economies will probably have given Covid shots to around 37% of their populations by the end of May, rising to 54% a month later. The bank is suggesting investors go short on European bond duration.

“Our economists remain optimistic on the European recovery as data have been resilient and vaccination is likely to accelerate from here,” strategists including Christian Mueller-Glissmann wrote in a note.