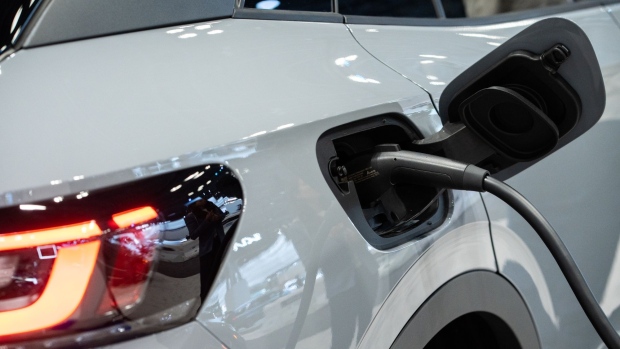 The charging port of a Volkswagen ID.4 electric sports utility vehicle (SUV) during the 2022 New York International Auto Show (NYIAS) in New York, U.S., on Thursday, April 14, 2022. The NYIAS returns after being cancelled for two years due to the Covid-19 pandemic. , Bloomberg

(Bloomberg) -- Many US public charging stations fail to work when electric-vehicle drivers need them, according to a new J.D. Power report that underscores the Biden administration’s challenge in building out a network of stations nationwide.

In a survey of more than 11,550 drivers, the firm found that one in five didn’t manage to charge their vehicle during a visit to a station. Of those that didn’t get their vehicles charged, 72% blamed faulty equipment.

Diminished driver satisfaction with the patchwork network of US charging stations threatens to slow the pace of electric-car sales—a key piece in President Joe Biden’s plan to slash carbon emissions. Fear of drained batteries, after all, is a key barrier for many drivers contemplating ditching gasoline-powered vehicles.

“Public charging continues to provide challenges to overall EV adoption,” Brent Gruber, executive director of global automotive at J.D. Power, said in a statement. “We need to make sure those stations are reliable.”

Read: When EVs die in the wild (and trust us they will)

The infrastructure law that Biden signed last year devotes $5 billion to building a nationwide network of EV charging ports along major travel corridors, with stations spaced no more than 50 miles apart. But the J.D. Power survey, conducted with EV data firm PlugShare, suggests that merely deploying those chargers won’t be enough to convince skeptical car buyers to try an EV.

Respondents gave the highest satisfaction ratings to Tesla Inc.’s chargers, both its high-speed Superchargers and its slower destination chargers often found at hotels and restaurants. Among the most common types of public chargers—known as level 2 chargers—ports deployed by Volta Inc. and ChargePoint Holdings Inc. scored second and third in satisfaction, respectively.