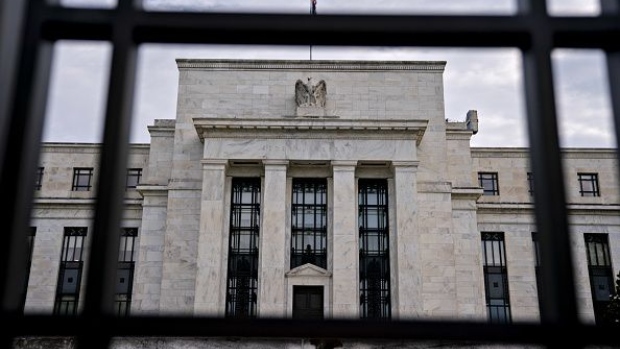 The Marriner S. Eccles Federal Reserve building stands in Washington, D.C., U.S., on Wednesday, July 31, 2019. The Federal Reserve is widely expected to lower interest rates by a quarter-point at its meeting that concludes Wednesday and leave the option open for additional moves despite demands by President Donald Trump for a "large" rate cut. , Photographer: Bloomberg/Bloomberg

The Federal Reserve might not be ready to explicitly target yields on U.S. Treasury securities to keep them from rising and hindering the economic recovery, but that doesn’t mean it won’t happen. If you believe the Fed will be under continued pressure to do more to support the economy, it’s tough to bet against the eventual adoption of so-called yield-curve control.

The central bank last week threw some cold water on the idea that yield-curve control, with the minutes of the June 2020 Federal Open Market Committee meeting revealing that policy makers had some qualms about this potential monetary policy tool. In general, they were more inclined to support the use of the already familiar tools of forward guidance and large-scale financial asset purchases known as quantitative easing.

And yet, the case for buying as many Treasuries as it would take — which experience suggests wouldn’t need to be much - to keep yields from rising is strong given the likelihood that the recovery loses momentum in the months ahead and the economy settles into a subpar equilibrium given the continuing spread of the COVID-19 pandemic.

Yes, the economy has regained some ground with the initial phase of reopenings across the U.S., but its full potential will go unfulfilled for a number of reasons.

First, job gains will come most easily early in the cycle as the lessening of lock-down restrictions forces some rapid rehiring as businesses reopen. Subsequent job gains will become increasingly harder to support, and some sectors will not fully recover anytime soon. Bars and restaurants that were forced to close will not be able to easily return to business.

The restructurings that follow will be a time-consuming process. The Fed’s Summary of Economic Projections anticipate high unemployment through 2022.

Moreover, surging virus activity in places such as Texas, Florida, and Arizona will further slow economic gains. Even without a return to strict lockdowns, areas hit hardest by the pandemic are losing economic momentum.

As long as the infrastructure of the public health system remains unable to manage the virus, we are likely to see ongoing ebbs and flows in activity that prevent a full recovery of the economy and keep the threat of disinflation high. And every time the economy stalls, the Fed will be under pressure to do something.

The Fed’s attention at the moment is on using existing tools to support the economy and bringing new lending facilities online. The next natural step in Fed policy is to enhance its forward guidance.

This will likely come by linking an increase in its target for the federal funds rate from the current range of zero to 25 basis points to some sort of economic objective. It’s most likely that the Fed ties policy more explicitly to realized inflation, a change that could occur within the next few monetary policy meetings.

Still, this will not take the pressure off the Fed. It will feel the need to accelerate the pace of the recovery.

The Fed could lean more heavily on buying Treasury and mortgage-backed securities under its current programs, but that would mean accelerating the increase in the size of the Fed’s balance sheet assets, which currently stands at US$7 trillion.

Policy makers will eventually worry about the optics of not only an ever-expanding balance sheet, but one that is growing at a faster rate.

A credible yield-curve control policy could be implemented with little additional purchases of assets, which would then leave more room to accelerate the pace of purchases at a later date if needed.

The Central Bank of Australia hasn’t had to buy bonds following an initial round of purchases to implement yield-curve control. In other words, a credible central bank would not have to purchase many bonds to sustain the strategy as long as the caps were consistent with expectations for the near-term path of policy. See the U.S. experience from 1942-47 as proof.

Rates at the front end of the yield curve where maturities are the shortest are already the same as the policy rate on the expectation of yield-curve control. The Fed could reinforce the current dynamic by simply announcing yield targets.

In fact, they may be forced to if confidence wanes that the Fed is willing to enact such a policy and rates at the front to middle part of the curve start to rise and threaten to tighten financial conditions. The primary purpose of yield-curve control in the U.S. would likely be to reinforce forward guidance.

The Fed probably wouldn’t target yields on longer maturity securities, like Japan has done, but yield-curve control in that part of the market would still work in tandem with existing asset purchases.

I think the Fed would retain quantitative easing to contain long-term debt yields if necessary or obtain the benefits of portfolio balance effects by forcing investors into riskier assets.

The ease of implementation and the ability to delay the expansion of asset purchases thus makes yield-curve control such an obvious choice that it almost has to be on the horizon.