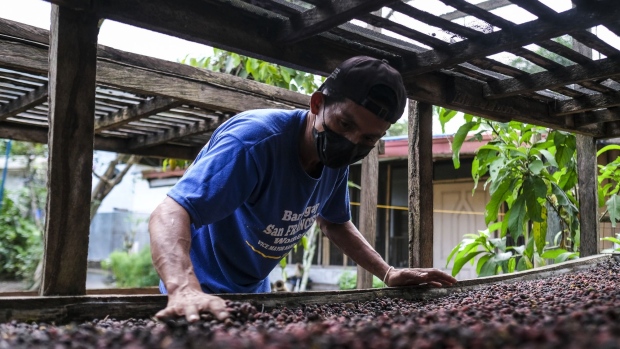 A worker evenly distributes coffee cherries on a wooden dying rack at the Finca Del Carmen plantation in Lipa, Batangas, the Philippines, on Friday, Dec. 4, 2020. Inflation in the Philippines accelerated to its fastest pace in 20 months in November on higher food and beverage costs, giving the central bank reason to pause on further rate cuts. , Bloomberg

(Bloomberg) -- Humanity consumes a half-trillion cups of coffee annually, yet its method of production is about as far from modern agriculture as one can get. There hasn’t been a major effort to develop a new varietal in 50 years—and that’s made coffee vulnerable.

The two main species grown today are robusta and arabica, the latter being the more flavorful and coveted of the two. Most modern strains of arabica were developed in the late 1960s. Decades later, this aging crop is succumbing to modern scourges like coffee rust fungus and borer beetles, along with oscillating heat and moisture levels.

Last year, hundreds of thousands of acres of coffee production were wiped out, a disaster which sent coffee futures skyrocketing. The climate-driven catastrophe was especially hard on subsistence coffee farmers in places like Guatemala, the foundation of an industry upon which some 125 million people rely for their livelihood.

If the industry doesn’t adapt, the consequences will be much worse. But the good news is that these growing climate pressures have spurred a movement to modernize production. In this Bloomberg Digital Originals video, we explore how scientists and entrepreneurs are racing to save coffee from human-induced disaster.