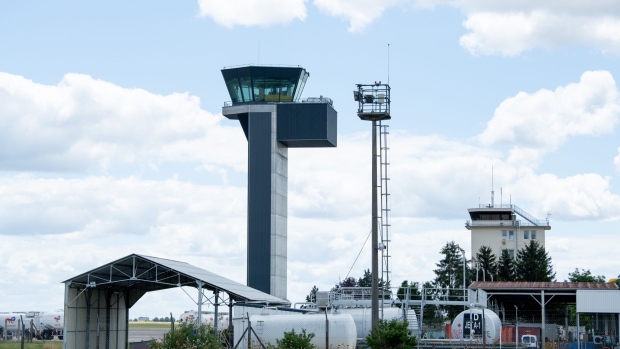 The interior of an Airbus SE A330 airplane during a its conversion to freight plane inside the new maintenance hangar, at Chateauroux-Centre "Marcel Dassault" Airport in Chateauroux, France, on Friday, July 1, 2022. Many airlines struggled to see a future for their enormous Airbus SE A380s when the pandemic grounded fleets in early 2020 but Frances Chateauroux airport, about 250 kilometers south of Paris, is opening their giant hanger equipped to handle the double-deckers and up to five or six narrow bodies. , Bloomberg

(Bloomberg) -- A little-known French airfield is emerging as a center for the fast-track transformation of Airbus SE passenger planes into freighters amid a surge in air-cargo demand triggered by the coronavirus pandemic.

Vallair, a specialist in aircraft maintenance and dismantling, is starting work at Chateauroux, 250 kilometers (155 miles) south of Paris, on modifying its first A330-300 jetliner using a method that takes only a month and comes in at a quarter of the price of a fully fledged passenger-to-freighter conversion.

Luxembourg-based Vallair’s approach involves stripping seats and fittings from the wide-body plane’s cabin without the costly installation of a large cargo hatch, instead relying on existing passenger doors. Rather than being loaded on standard pallets or containers, parcel-sized consignments are stowed via a conveyor belt that fits inside the hold.

The air-freight sector posted its highest-ever volumes over the past two years even as the Covid-19 pandemic roiled the passenger market, aided by a surge in online shopping and the dislocation of traditional supply chains. Wide-body freighters priced above $350 million for the latest models are in short supply, while the waiting time for fully converted A330s, costing as much as $20 million, can be five years, including more than six months of engineering work.

“We’re surfing the moment,” Vallair Chief Executive Officer Gregoire Lebigot said in an interview during a recent visit to the site. “Demand is very strong.”

A converted A330 from the company has a payload of about 60 tons and should cost less than $5 million, based on estimates from aviation-services firm IBA Group Ltd. What’s more, the modifications are reversible, allowing carriers to reinstate seats should the cargo boom fade. Approval from the European Union Aviation Safety Agency is expected soon and requires only supplemental type certification, given the relative simplicity of the work.

Competitors in the full conversion market include EFW, in which Airbus holds a stake. The Dresden, Germany-based company takes as long as eight months to rebuild an A330 with a door measuring 13 feet by 10 feet and two cargo decks capable of accommodating all manner of freight.

Israel Aerospace Industries Ltd., which has long converted Boeing jets, is also entering the sector with a contract to modify 30 A330s for leasing firm Avolon Holdings Ltd. between 2025 and 2028.

Vallair has been involved in converting narrow-body Airbus A321s and Boeing Co. 737s for about a decade in the US, China and Singapore. The French operation will be its first for an A330 and have capacity for about 10 planes a year, Lebigot said.

Work will take place in a gigantic new hanger at Chateauroux airport, a single-runway former NATO base surrounded by farmland, designed to be big enough to service or store A380 superjumbos.

IBA President Phil Seymour said that with the A330 passenger-jet market “relatively soft” as the model is superseded by newer planes and long-haul travel recovers slowly from the pandemic, converting the aircraft is “a good economic option.”

The Vallair approach is attractive in terms of time and cost, he said, though by omitting a large door it inevitably excludes carriage of items such as cars and heavy machinery. A spokeswoman for EFW said “preighters,” as passenger jets transformed to temporary cargo use are known, are best suited to express parcel delivery, though loading times in the absence of pallets can be an issue.

Constraints on supply-chain logistics that have seen containers build up in ports should continue to spur air-freight activity next year and probably into 2024, said Pascal Fabre, managing director at AlixPartners in Paris.

Container lines swollen by record shipping profits are even making a foray into air-cargo as an additional revenue stream and faster alternative to ships. CMA CGM is setting up its own freighter fleet in partnership with Air France-KLM, while MSC Mediterranean Shipping Co. is leading a bid for new Italian flag carrier Italia Trasporto Aereo with Germany’s Deutsche Lufthansa AG.