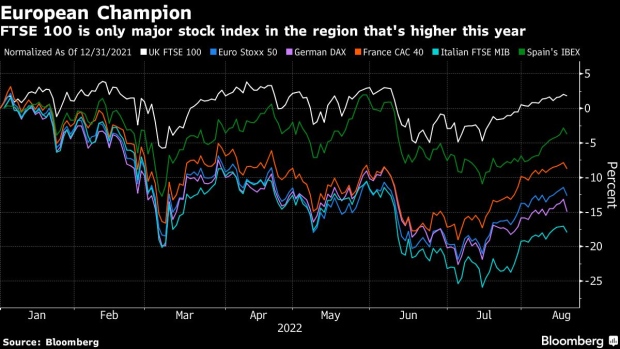 An employee views a FTSE share index board in the atrium of the London Stock Exchange Group Plc's offices in London, U.K., on Wednesday, May 29, 2019. While the FTSE 100 Index has climbed about 15 percent since June 2016 in local currency, it's down in both euro and dollar terms. Photographer: Luke MacGregor/Bloomberg , Bloomberg

From the cost-of-living crisis, the political chaos to labor strikes, the UK has it all going against it. The country’s blue-chip index has been the only bright spot -- now that too is coming under threat.

The FTSE 100 Index is up about 1.6% year to date, beating a 13% drop for the Euro Stoxx 50, helped by its big exposure to value segments such as energy, miners and banks, all of which have outperformed amid the broader rotation away from growth. Those gains are quickly evaporating as the summer of 2022 has seen the growth stocks’ resurgence.

“We are beginning to see institutional interest in UK equities fade,” said Daniel Gerard, senior multi asset strategist at State Street Global Markets. Amid rising recession fears globally, he said the outlook for energy would likely fall and that the first-half tailwinds from rates to currency weakness were unlikely to propel the index further.

There’s a similar trend in the latest survey of fund managers by Bank of America Corp. Though the UK remains investors’ favorite stock market in Europe, allocation to British stocks among global fund managers dropped to a net 15% underweight in August from 4% in July, the poll showed.

To be sure, it’s far worse for the euro-area: investors are a net 34% underweight. But at the same time, fund managers have a net 10% overweight for US stocks.

Though the index is still “attractively valued”, Alan Dobbie, co-manager of the Rathbone Income Fund, said he sees a “clear market consensus expecting central banks to be forced into a pivot away from their aggressive tightening programmes.” That could shift investors back into longer-duration growth sectors like technology -- and FTSE 100 hosts very few such companies.

To be fair, there are still some fundamental reasons to cheer: the gauge’s constituents get more than two-thirds of sales from outside the UK, providing a shield from the country’s economic and political headwinds.

“Companies that are not exposed to the domestic UK economy -- that have global presence -- are good places to hide out from the storm” Swetha Ramachandran, an equities investment manager at GAM, told Bloomberg Television.

Meanwhile, the UK’s domestic stocks remain under pressure, with the FTSE 250 Index of the country’s midcap stocks falling 14% in 2022 as a weaker pound has added to surging costs and spiraling inflation has fueled concern that consumers will trim spending.

“While so far earnings have held up better than expected, the market is concerned this will get a lot worse,” said Tineke Frikkee, head of UK research at Waverton Investment Management, in an emailed response.