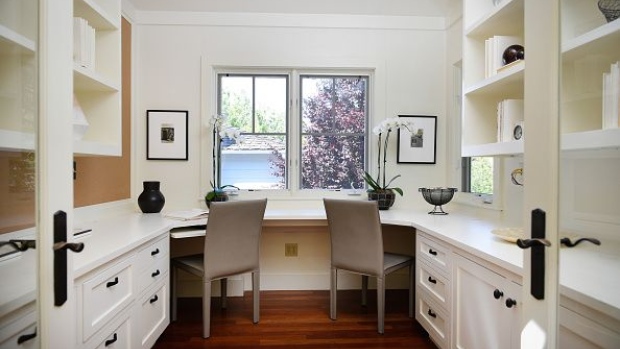 (Bloomberg Opinion) -- Ever since the coronavirus sent millions of people home to work, people have been predicting that remote work will endure after the pandemic is over.

I can’t imagine everyone not wanting to race back into the office the minute it is safe to do so. But my wife and I both have full-time jobs, and we have been home with our two young kids. The corporate world isn’t debating a post-pandemic future of continuing the lockdown, but instead of working remotely from home while kids are at school and cafes are open. So set aside the challenges of the last few months with school closures and social distancing, and consider whether traditional offices may be a thing of the past.

Some companies clearly think it is. My fellow Bloomberg columnist Tyler Cowen has bemoaned the tech industry’s apparent conversion. Slack, the messaging technology company, announced last week that most of its employees would have the option of permanently switching to remote work, and that it would increasingly hire people into remote-work positions. Facebook expects that half its workforce could be remote in the next five to 10 years. Last month, Twitter announced that its employees could continue working from home permanently.

Other employers are changing policies as well. Nationwide Insurance is planning to close offices around the country by Nov. 1, moving those employees to permanent telework status. Barclays CEO Jes Staley said in April that “the notion of putting 7,000 people in a building may be a thing of the past.”

There is some preliminary evidence that remote work is working. Or, at least, that is isn’t failing. Upwork, an online staffing company, recently published results from a survey of hiring managers. The survey finds that over half of the U.S. workforce is working from home. Fifty-six percent of hiring managers think the shift to remote work has gone better than they had expected.

Around one-third of managers think remote work has increased productivity, while 23% think productivity has dropped. Over six in 10 hiring managers report that as a result of the pandemic, their organization’s workforce will be more remote than it was before.

But it’s critical that managers not overlearn lessons from the pandemic. This spring, managers were nervous that productivity would tank during the shutdown because telework would be unsuccessful. Employees would slack off during the day without colleagues and supervisors nearby, and given all the distraction of home.

Surely this anxiety was communicated inside businesses, and workers got the picture. Many likely ramped up their effort during the shutdown to prove to their bosses that they were still valuable as teleworkers. With the rest of the world shut down, too, people had to put off a lot of the functions of normal life, not just going out for social reasons, but also for important things like doctor’s appointments. Add to this workers’ worries about recession-driven layoffs, and it’s no surprise that many managers see productivity increases.

But a company that permanently switches to telework once the pandemic is behind us would be doing so in a very different environment. If telework is the norm and layoffs aren’t a pressing concern, workers may not put in special effort. And with the world opened up, the boss can’t be sure employees are tethered to their homes, the way they have been.

Like many, I have been surprised by how well working from home has gone. My usual in-person interactions with colleagues have translated quickly and efficiently to Zoom and phone calls. But the sudden nature of the pandemic shutdown meant that I had well-established relationships with all my now-remote colleagues. These relationships were built on months and years of in-person interactions. It’s much easier to work with someone productively using Zoom and email if you have a well-established relationship with them first.

Now that the U.S. is in its second quarter of telework, new employees will be hired in this environment. How quickly they integrate into corporate communities and ramp up their contributions will be a much better indicator of whether a company should go remote permanently than the experience with remote work from this spring.

Productivity is something of a black box, but anyone with coworkers knows the important role that emotional intelligence plays in getting work done. Being able to read someone’s body language, tone of voice, or slight changes in facial expression is often critical to work in a team setting.

It is hard to learn how to interpret these idiosyncratic forms of expression outside of the social setting an office provides. Likewise, trust, group cohesion and collegiality develop in large part through the informal interactions that occur in workplaces throughout the day.

In the Upwork survey, nearly one-third of hiring managers reported that reduced team cohesion has been an issue with remote work. Managers should think twice before assuming productivity won’t suffer without this subtle elixir.

Having a good working relationship with people outside your immediate group is also important. In an office, you bump into many people once or twice a week while getting coffee or walking to the building from the parking lot, bus or train. In an office setting, you are acquainted with them. Under remote work, they are strangers.

Some of the relatively few studies on remote work do show that working from home increases productivity, but those that I am aware of examine companies in which work is solitary. For example, a Chinese travel agency randomly assigned some call-center employees to work from home, leading to a 13% performance increase in that group. The applicability of this result to many businesses is limited.

Similarly, the writing part of my job is a relatively solo task, and my editors at Bloomberg work in New York while I work in Washington. I have great relationships with my editors, but I see them in person several times per year, which is invaluable to making my remote arrangement work.

Pandemic teleworking has led some to speculate that cities themselves may be depopulated, with people flooding to small towns when given the option to work remotely for big companies. But “work from anywhere” models suffer even more from the problems of remote work, because workers would have even fewer opportunities to interact in person with their colleagues.

The economic benefits of close proximity are well known. Under “work from anywhere,” professional networks would fray, or wouldn’t even form. Creativity would suffer. Career opportunities, particularly for young people, would diminish. Lifetime productivity would fall.

And the perceived benefits of working from anywhere for those who would rather not live in cities would diminish greatly over time if that business model was heavily utilized. The cost of living in smaller cities and towns would rise, and in major cities it would fall.

The coronavirus pandemic has changed daily life more quickly than any event in modern memory. It will leave lasting effects. But once it is behind us, life will normalize to a greater degree than many seem to think.

A lot of employees will work from home a few more days per month than they used to. Flying across the country for a one-hour meeting may be a thing of the past. But businesses operated as they did before the pandemic for good reasons, and once the virus is vanquished, those considerations will remain as compelling as ever.

Michael R. Strain is a Bloomberg Opinion columnist. He is director of economic policy studies and Arthur F. Burns Scholar in Political Economy at the American Enterprise Institute. He is the author of “The American Dream Is Not Dead: (But Populism Could Kill It).”