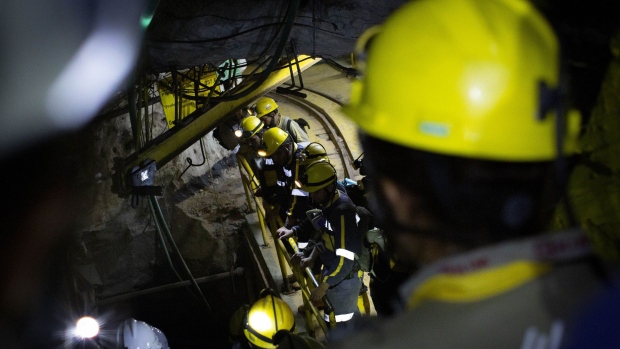 (Bloomberg) -- The collapse in commercial air travel amid global coronavirus restrictions has an unexpected casualty -- gold miners looking to transport their metal to refineries.

Producers typically rely on regular airline services to ferry mined metal -- called dore -- from remote operations to the specialist plants that separate out the precious metals and craft them into bars or coins.

That’s becoming more difficult with a large swathe of global aircraft grounded, including about two-thirds of the passenger jet fleet, according to Cirium, an airline industry data provider.

“Where we’ve had to be doing more work is getting dore -- the metal -- to market,” said Tom Palmer, chief executive officer of Newmont Mining Corp., the world’s biggest gold producer. “Typically dore travels on commercial airliners, so it’s been about finding alternative paths to get that dore to refineries around the world.”

Newmont is competing to secure slots for its shipments on the small number of remaining commercial flights, Palmer said in a Thursday interview. “The other work is around identifying how we can charter aircraft -- how we work with some other companies to team up and share a charter load.”

A shutdown of the airline industry has made transporting gold in all forms more difficult, the World Gold Council’s chief market strategist John Reade said last month. Difficulties in moving metal between trading hubs, and linking those markets with vaults and refineries has impacted prices, widening the spread between New York futures and London spot prices.

Greenwood Village, Colorado-based Newmont, which produces more than 6 million ounces of gold a year, has also contended with disruptions at refineries, including closures earlier this month in Switzerland. It has an agreement with Australia’s Perth Mint to potentially accept mined metal from operations the facility doesn’t typically service, including the Merian asset in Suriname, about 10,000 miles (16,000 kilometers) away, according to Palmer.

“We now have an avenue, if we need to use it, for our dore from Peru, or Suriname, or Ghana, to go to the Perth Mint to be processed, rather than the U.S. or Europe,” he said. “You have got to get your thinking caps on.”

The company has shuttered some operations in Canada, Argentina, Mexico and Peru as a result of coronavirus curbs, and has been coordinating with suppliers including Caterpillar Inc. and explosives maker Orica Ltd. to minimize supply chain delays, Palmer said.