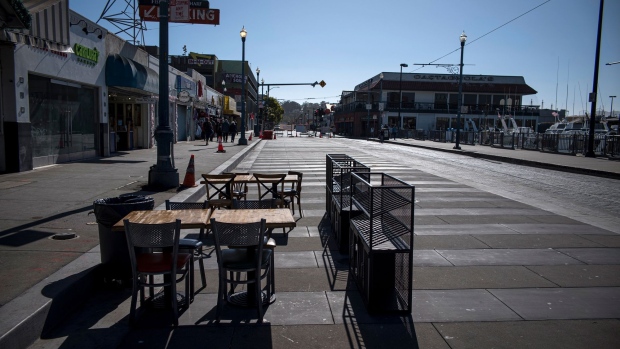 Empty tables and chairs stand outside a restaurant on Jefferson Street at Fisherman's Wharf in San Francisco, California, U.S., on Wednesday, July 8, 2020. Built from the rubble of the 1906 earthquake and fire, the Wharf is now facing a different sort of rebuild after Covid-19 economically flattened it. , Bloomberg

The best is already over for a global economic recovery that started off at a sprint and is turning into a slog.

That’s the warning from Wall Street economists heading into the final months of a traumatic year. Some US$20 trillion of stimulus from governments and central banks has pulled the world’s economies most of the way back to pre-pandemic levels. But for multiple reasons, the last stretch is set to be the hardest.

Policy makers could dial back the fiscal support that’s been key to recovery -- as they’ve already done in the U.S. Temporary job cuts may harden into permanent ones, a worry compounded this week when corporate giants Walt Disney Co. and Royal Dutch Shell Plc fired tens of thousands of workers. And the virus itself is spreading faster, and forcing governments to reimpose lockdowns, as cold weather arrives.

“We’re getting past the phase where we’re rebounding from the shutdown,” Ethan Harris, Bank of America Corp.’s head of global economic research, said on Bloomberg Television. “Now we’re more into the grinding forward phase.”

All these risks have made investors less bullish than they’ve been since the early weeks of the coronavirus crisis. The S&P 500 Index declined in September after five straight monthly advances, and Europe’s Stoxx 600 also pared gains.

The good news is that the world economy proved more resilient in a global health crisis than many had feared, thanks to a rapid policy response. Governments subsidized incomes and helped companies stay afloat, while central banks cut interest rates and ensured that stressed financial markets remained liquid.

One measure of their success: Deutsche Bank AG, which back in May was warning of a 5.9 per cent slide in global GDP this year, now reckons the contraction will be limited to 3.9 per cent.

But that would still amount to the deepest slump in generations. And it’s not clear how much more governments are willing to borrow and spend to complete the recovery.

Fiscal stimulus added 3.7 percentage points of growth to global GDP this year, according to JPMorgan Chase & Co. But the bank’s economists expect policy makers to repeat the mistakes they made after the 2008 financial crisis, and pivot prematurely to austerity -- turning this year’s boost into a 2.4-point fiscal drag next year.

In the U.S., economists have been cutting fourth-quarter growth forecasts because they fear that efforts to pass another coronavirus spending bill have stalled in Congress, though a deal remains possible before November’s presidential election.

In Europe, where the virus spurred leaders to overcome deep disagreements about pooling their budget resources, a historic 1.8 trillion-euro (US$2.1 trillion) recovery fund -- seen as crucial for struggling countries like Italy and Spain -- now faces potential delays.

Further damping hopes of a V-shaped recovery is the accelerating spread of the virus and the absence of a vaccine. Governments are reluctant to go back into full lockdown, aware of the devastation it could wreak on businesses. But many parts of Europe, including the U.K, have re-imposed some curbs.

With their revenues squeezed, businesses could face problems repaying debts -- leading to more bankruptcies, and making lenders more reluctant to extend credit even to viable firms. And the longer social-distancing regimes are in place, the more likely it is that companies will decide the drop in demand for their goods or services is a permanent phenomenon, not a temporary one -- and shrink their workforce.

A rising case count in some major advanced and emerging market economies, depleted fiscal stimulus in the U.S., and a vaccine that’s still months away add up to an uncertain outlook for the global economy. The easy strides of the recovery are over. The months ahead will be a harder slog.

That’s already happening in several industries. In recent days, Disney announced plans to ax 28,000 workers, Shell said it may cut as many as 9,000, and Germany’s Continental AG approved a restructuring plan that will abolish or shift 30,000 jobs worldwide.

As some pandemic job-losses become permanent, the recovery in labor markets is slowing. In the U.S., applications for unemployment benefits remain elevated at about four times last year’s levels, and a key report on Friday will probably show payrolls growth slowed in September.

Some countries are at least seeing encouraging virus data -- especially China, where the disease first spread. The world’s second-biggest economy has managed to bring the pandemic under control, and get further along the road to recovery than most peers, even if several indicators suggest it’s starting to plateau.

But there are other risks besides the pandemic world economy. Business confidence is at the whim of geopolitics, as the U.S. prepares to vote and its trade tensions with China simmer. The U.K.’s trade negotiations with the European Union are in flux, with a hard Brexit still a risk.

“Our base case is still for some improvement in the economy,” said Kathy Jones, chief fixed income strategist for the Schwab Center for Financial Research. “We’re walking a fine line.”