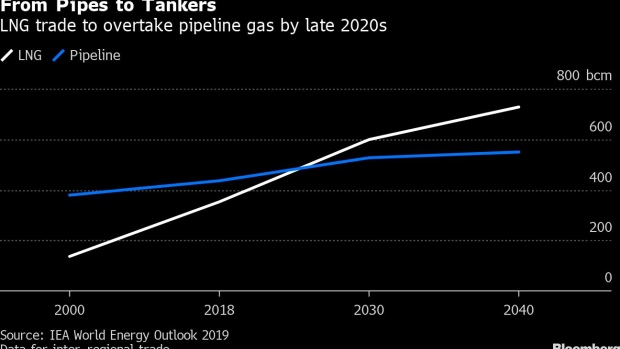 The liquefied natural gas market is booming, but a massive glut is testing all the utilities and trading companies that have set up desks in the past decade.

This week, industry bosses and traders descend on Rome for their biggest regional shindig. Their focus will range from whether China’s huge appetite for the fuel will return to whether the jump in supply that helped underpin their expansion will still be absorbed by Europe’s pipes and storage terminals for years to come.

Here are five charts that explain the dynamics in the market right now.

Spot prices in Asia, already at their lowest ever level for this time of year, are heading south at a time they typically rise with the onset of winter demand. This season, new supply from mainly the U.S. and Russia are adding to a global glut just as a mild winter so far and a slowing economy curb consumption. Prices have crashed in Europe too.

“Clearly there seem to be sufficient LNG around in the market to cope with this coming winter and for 2020,” Javier Moret, global head of LNG at RWE AG‘s trading unit, said in an interview. But prices could still recover as Russia and Ukraine hasn’t yet agreed on a transit deal beyond New Years Eve, or if the winter gets really cold.

With most of the new supply coming from the Atlantic basin, Europe’s ability to soak up more fuel is firmly in focus. Britain, home to three terminals, increased imports the most this year, even beating China, according to industry research group Cedigaz. The urge to sell cargoes in Europe was so high in November that some tankers waited days outside ports to unload.

While spot prices have crashed, LNG sales tied to oil are reflecting the 13% gain in crude this year. As the industry meets in Rome, OPEC and its allies are gathering 700 miles away in Vienna to consider output levels for the year amid speculation that the group could deepen cuts further.

The rising gap between cheap spot LNG and more expensive oil-linked gas may spur a new wave of reviews of contracts near expiry, Fitch Ratings Ltd. said on Monday in a report. That could make it more difficult for new projects to get the final nod since about 75% of the fuel is still sold on such long-term deals, Fitch said.

In line with a surge in the physical market, buying and selling of futures are also rising. While that’s giving LNG a broader appeal as an commodity to invest in, derivatives trading is still a tiny fraction of the volume seen for U.S. and European natural gas futures.

LNG is set to expand at triple the pace of pipeline gas by 2040, the International Energy Agency said last month in its annual World Energy Outlook. While gas will still trail oil, it’s set to overtake coal by 2030 in the global energy mix.

--With assistance from Dan Murtaugh and Andrew Reierson.

To contact the reporter on this story: Anna Shiryaevskaya in London at ashiryaevska@bloomberg.net