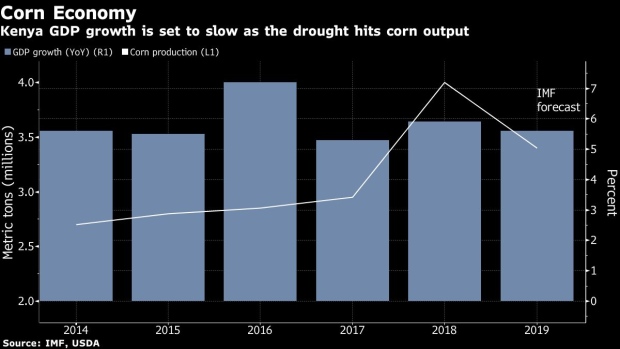 (Bloomberg) -- Heavy rains pounding East Africa have been deadly and destructive, while creating hope that the delayed storms will rescue the region from a withering drought.

At least 132 people have died and 17,000 have been forced to leave their homes in Kenya as floods and landslides hit parts of the country. Another 44 died in Tanzania and 38 in Burundi as strong waters gashed through homes, while the Ugandan government was forced to close a key bridge after the River Nile flooded. The downpour is expected to continue through December.

The rains have helped alleviate the drought across the region but have damaged infrastructure and farmland. These charts show the potential impact in Kenya, which has been hardest hit by the downpour that has come too late and too heavy.

Annual inflation in East Africa’s largest economy accelerated for a second consecutive month to 5.5% in November as food prices climbed on shortages caused by the drought. While the rate will remain within the government’s target range of 2.5% to 7.5%, it won’t quickly drop to the lower end of the range because the rains have submerged farmland and damaged transport routes.

“Despite the rains, there is still pressure on food inflation due to the elevated cost of maize,” said Cytonn Investments Management Ltd. Chief Executive Officer Edwin Dande, using the local term for corn. Going by the agriculture ministry’s assessment, the rains may raise post-handling losses to 30%, he said.

Production of tea, one of Kenya’s biggest foreign-exchange earners, may increase with rains now watering the estates, said Agriculture Food Authority Interim Director Antony Muriithi. Earlier, the department had forecast a 12% drop in output due to the drought.

“We are likely to see the same performance or a slight increase in production this year,” Muriithi said. “The ripple effect of the rains is that production will be high into next year.”

The International Monetary Fund forecast Kenya’s economic growth will slow to 5.6% this year from 6.3% in 2018 partly due to the drought that hit farm output including corn, a staple. The government warned that a persistent drought would knock a percentage point off this year’s economic growth.

Agriculture accounts for about a third of Kenya’s gross domestic product and regularly gets hit by extreme weather. Between 2008 and 2011, droughts and floods caused economic liabilities equivalent to 2.4% of GDP, according to a study by the state-controlled Kenya Institute for Public Policy Research and Analysis. The contribution of farming to Kenya’s GDP has increased and remained above 30% since 2015 from 21.4% in 2010.

The cost of electricity could drop as rainfall fills dams and boosts generation of hydro-power, whose tariffs are lower than those from diesel-fired generators, according to data from the Energy and Petroleum Regulatory Authority. The average cost of hydro-power is 3.11 shillings ($0.3) per kilowatt hour compared with 18.78 shillings for diesel-generated electricity, according to the agency.

Hydro-power, accounting for about a third of Kenya’s electricity output, is set to gain more significance in nation’s energy mix as it aspires to generate from renewable sources only.

“Electricity tariffs are expected to remain at current levels for now, but decline in the coming months due to the rains which are bound to facilitate cheaper hydro-power generation,” Cytonn’s Dande said.

To contact the reporter on this story: David Herbling in Nairobi at dherbling@bloomberg.net