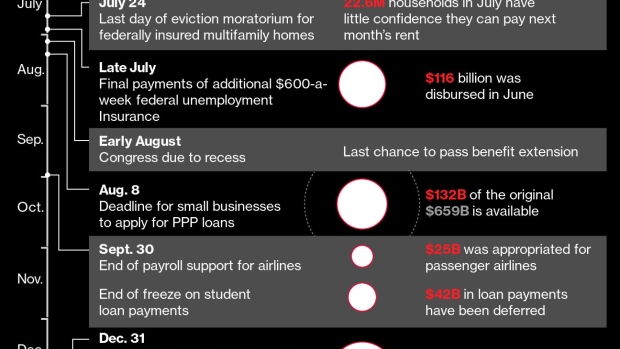 (Bloomberg Opinion) -- It’s possible that by the end of today, when the clock runs out on additional unemployment benefits for workers who’ve lost their jobs to the coronavirus, Congress and the White House may suddenly reach an agreement to renew the program.

If not today, it’s possible they’ll spend all weekend hammering out a deal. And if not this weekend, perhaps legislators will forgo their August vacation, er “recess,” to construct the next round of bailouts.

But don’t count on it. The likeliest scenario now appears to be the worst one — that Congress won’t get anything done at all in the midst of the biggest U.S. public health crisis in a century, with economic output plunging at rates not seen since after World War II.

The well-being of hundreds of millions of Americans is at stake, and the scale of this epic catastrophe has been obvious for months, yet we’ve arrived at the precipice in apparent disarray. The fault here lies with the Republicans. In May, Democrats in the House of Representatives introduced their proposal for another mammoth federal rescue package. Republicans in the Senate sat on their hands until four days ago, when their fractured caucus introduced an anemic alternative that Democrats, and many in their own party, couldn’t stomach. The White House has thrown its own wrenches into the process while proving unable to help Democrats and Republicans resolve their differences.

So here we are, watching this disaster unfold at a time when the economy and society need adult hands on the steering wheel.

According to Politico, a late night meeting on Thursday involving Treasury Secretary Steven Mnuchin, White House Chief of Staff Mark Meadows, House Speaker Nancy Pelosi and Senate Minority Leader Charles Schumer failed to bridge the divide. A breaking point in all of this is whether to extend additional unemployment benefits of $600 a week. Republicans originally wanted significantly less for the program, but now may be willing to consider a four-month extension. Democrats want the program in place through the first quarter of next year.

The two sides are also at odds over how much help to provide state and local governments and how to revivify the Paycheck Protection Program for small businesses. The White House has been unable to engineer a national testing program — one of the most emblematic failures of the federal government’s Covid-19 response — and funding for that effort has also been a stumbling block. According to Politico, Meadows tried twice to contact Anthony Fauci, the director of the National Institute of Allergy and Infectious Diseases, whom the White House has tried to turn into a piñata, to get advice about funding for testing but couldn’t reach him.

“We just don’t think they really understand the gravity of the problem,” is how Schumer described the Republican stance in the talks.

Needless to say, the problem is extraordinarily grave. As we have argued before, this historic moment demands the most bold and creative responses possible from the federal government to hold the economy and the social fabric together. Congress and the White House need to not only keep a safety net under workers, their families and the economy, but also force through an ambitious jobs program akin to the New Deal — not short-term fiscal band-aids that don’t resolve fundamental problems.

The federal government appears to lack the vision and cooperation needed to engineer a response on that scale. At the very least, until it can get its act together, it should extend the assistance already in place.

Timothy L. O'Brien is a senior columnist for Bloomberg Opinion.