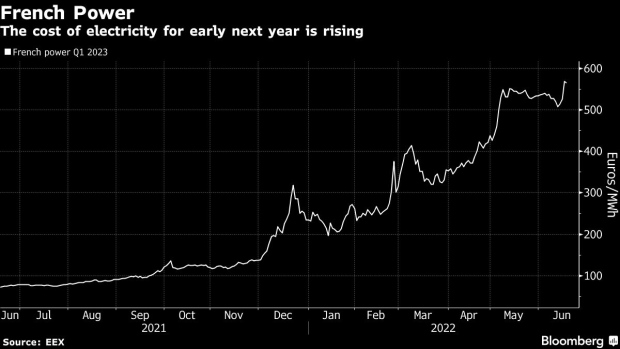 (Bloomberg) -- Three decades ago, Europe decided to open up its energy markets to foster competition, a move meant to bring lower prices for consumers across the continent.

Fast forward to 2022, and bills have ballooned while once rock-solid utilities are struggling to stay afloat. As a result, governments are realizing they can’t leave energy security solely in the hands of markets. Berlin is in talks to bail out Uniper SE, France is considering nationalizing Electricite de France SA, while Britain has brought gas and electricity provider Bulb Energy Ltd. under its control.

“This is only the beginning of growing government intervention in markets,” said Leslie Palti-Guzman, president of New York-based consultancy Gas Vista LLC.

The underlying causes for each rescue may vary, but each are rooted in a simple truth: there just isn’t enough energy to go around anymore. Russia is severely limiting supplies to Europe, French President Emmanuel Macron is grappling with an aging fleet of nuclear reactors,  and a lack of regulatory oversight meant British gas and power providers sold cheap energy without considering the return of a commodities supercyle that brought high prices.

And things could get worse still. Over the years, Europe became increasing reliant on Russian gas, which President Vladimir Putin has now weaponized in response to the global opposition to his invasion of neighboring Ukraine. Gazprom PJSC is curbing exports through all major pipelines to Europe, complicating continent’s efforts to store enough gas ahead of winter heating season.

Gas prices in the Netherlands, a European benchmark, are already eight times higher than normal, and electricity trading is signaling the crunch may last into next year. Power for 2023 delivery is changing hands at prices six times higher than the 5-year average in Germany, Europe’s biggest market.

That’s driving up costs not just for consumers, but also for energy-intensive industries, from steel furnaces to metal smelters to cement and chemical plants.

“There’s a limit to how long this situation can be sustained, the market won’t balance itself out until 2024,” said Gergely Molnar, an energy analyst at the International Energy Agency. “Until then, these financial tensions will be in place.”

The looming bottlenecks and surging prices are prompting governments to step in. Europe has ordered countries to replenish storage sites, and nations like Austria and Germany are paying top dollar to stash gas away in their storage sites.

The German government is handing out one-time payments to households this month to soften the blow from energy bills that Economics Minister Robert Habeck has called “bitter news” for consumers. France plans to double down on the 25 billion euros in spending and tax cuts it already earmarked to shield consumers and businesses from surging energy costs.

Italy is set to spend almost 40 billion euros subsidizing energy bills for consumers, while the UK put down some £37 billion ($44.7 billion) to ease the impact on consumers. The nationalization of Bulb alone will cost consumers about £2.2 billion.

In the Czech Republic, state-controlled utility CEZ is in talks with the government about measures that could protect liquidity in extreme events, such as the termination of natural-gas supplies from Russia. All told, some analysts estimate the wide-ranging international support packages for consumers will reach 100 billion euros in total aid.

“That governments are increasingly having to bail out energy companies is a sign of their failure to consider the impact of price shocks on their policies,” said Kathryn Porter, a consultant who has worked for Centrica Plc and EDF Trading. “This is a serious oversight which will add to the already high costs faced by consumers.”

Beyond straight financial aid, Germany has beefed up its powers to stabilize energy markets. A law passed in May gave the government the ability to seize critical energy infrastructure in an emergency. Habeck has said such “dramatic” powers were needed to counter Russia’s use of energy to retaliate against Europe for sanctions over the war in Ukraine.

Measures already on the table include bailouts of utilities, price caps on gas and liquefied natural gas, as well as subsidies to protect citizens’ purchasing power.

A generation ago, European energy markets were dominated by monopolies that gave consumers few choices. It was only in 1996 that the European Union decided to gradually open up markets as government policies became more influenced by the belief that more competition would strengthen security of supply, lower costs and address energy poverty.

That projection didn’t exactly play out as planned. Over the years, Germany grew increasingly dependent on Russian gas, further exacerbated by its decision to close down all of its nuclear power plants. Britain was extremely lenient in its permits to set up an energy supplier, leading to a chaotic market place that resulted in more than 20 companies collapsing just in the past year.

France remained heavily reliant on EDF, in which it already owns 84%, and is now grappling with faulty reactors that are increasingly turning the country -- known for supplying its European neighbors with surplus nuclear electricity -- into a power importer. In Eastern Europe, many countries continue to depend on gas from Russia, giving Putin’s leverage over some of the former Soviet bloc.

Europe is now paying a hefty price for its false sense of political security following the end of the Cold War, which left it so dependent on intermittent renewables generation and a Russian gas supply it thought it trust. Germany was forced to seize and rescue a former unit of Gazprom as it owned about 20% of the country’s storage capacity and Wingas GmbH, a key supplier to businesses.

Uniper is in dire straits, receiving only about 40% of its Russian gas orders, a move that analysts estimate is costing the company about $30 million a day. As a result, the company said on June 29 that it’s discussing a possible increase in state-backed loans or even equity investments to secure liquidity.

Others may soon find themselves in similarly difficult positions. Energy trading houses, for example, are also being forced to replace contracts with Russia, often a costly unwinding of existing agreements.

“We fear a cascading effect in the industry,” said Timm Kehler, chairman at the German gas industry lobby group Zukunft Gas. “The state should intervene to support this.”

In France, EDF’s financial situation has continued to deteriorate even after the government injected 2.7 billion euros in April as part of a 3.2 billion-euro capital increase. Chief Executive Officer Jean-Bernard Levy is urging the government to nationalize the company as soon as possible, according to a person familiar with the discussions.

A spokesperson at EDF declined to comment on a potential need for nationalization, while saying the company requires “visibility to be able to pursue its investment” for the country’s energy transition.

Governments are going as far as planning to tax energy companies on their profits. Spain and Portugal put a cap on the price of gas used to make electricity, and Britain considering decoupling power markets from the cost of gas. During a meeting of the Group of Seven leaders in Germany last weekend, Macron called the way electricity prices are set “absurd” and demanded reform of the market.

“It may not quite come to nationalizations, but I wouldn’t rule out governments taking significant stakes in some companies, especially if these prices continue for another year or two,” said Jonathan Stern, a researcher at the Oxford Institute for Energy Studies.