'We can't find anyone willing to work for less than $18/hour': Employment agency

The so-called “Great Resignation” emerging out of the COVID-19 pandemic hasn’t quite come to fruition in Canada as it has in the United States, according to a new report by CIBC Capital Markets.

Indeed, businesses in certain sectors are struggling with a labour shortage and wages have been increasing on both sides of the border, but CIBC said the data shows the number of people choosing to leave their job in search of greener pastures elsewhere is much more pronounced in the U.S.

“[It] seems more apparent in the U.S. than in Canada, and if the reasons for that persist, it implies that the American labour market is tighter and more inflationary, than it looks either in absolute terms, or relative to Canada,” CIBC Economist Avery Shenfeld said in a note to clients Thursday.

Shenfeld said the U.S. has seen a meaningful increase in the “quit rate” — people leaving their job voluntarily to search for a new one — relative to the pre-pandemic average, while a similar Canadian indicator is essentially unchanged from pre-COVID levels. 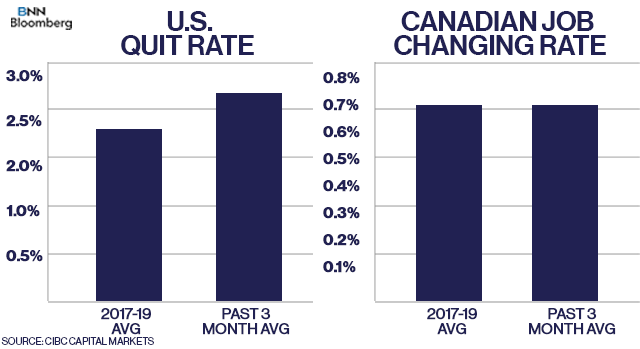 “Such voluntary job departures are typically seen as a signpost of a tight labour market, one that encourages workers who are disenchanted to look for a better opportunity elsewhere in the knowledge that such offers exist,” Shenfeld said. “So the fact that such activity has picked up more south of the border relative to the pre-pandemic trend is yet another hint that American labour markets are tighter than they look.”

There has been much debate and speculation over how the pandemic has uprooted peoples’ careers — whether from factors such as newfound remote work capabilities, mass layoffs particularly in lower-paying jobs, or forced early retirements, and how that has reshaped the labour market.

Shenfeld said data shows a rising share of older Americans are choosing to retire early compared to Canada. And he added labour participation rates among prime-aged workers between both countries widened further post-pandemic.

“Some explanations of the gap in under-55 labour force participation would lean towards it being temporary. Canada provided more of its overall pandemic-related business support through generous wage subsidies, which incented employers to keep workers on the job even when their overall output was minimal,” he said.

Shenfeld said some of the labour shortage currently plaguing businesses can likely be explained by a “true supply-demand imbalance” in the job market where employers are underestimating how much they need to pay up for certain skill sets.

With data showing a tighter American labour market, Shenfeld is predicting the U.S. Federal Reserve will keep pace with the Bank of Canada in hiking interest rates next year, and in fact, hike slightly more aggressively in 2023.