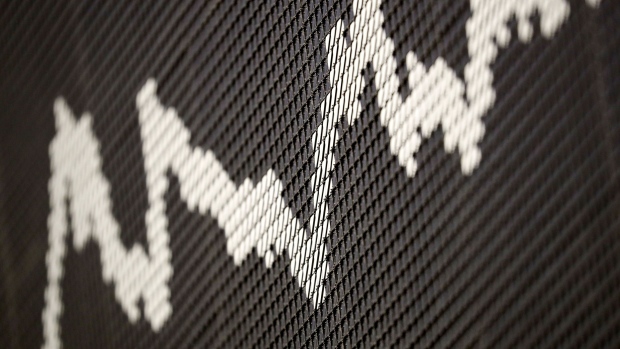 A vaccine-fueled economic recovery and investors’ surging appetite for risk mean that the European equity rally can keep going in 2021, according to strategists.

After strong gains since the start of the year, the bull case for Europe has now partially played out. Still, on average, the 21 strategists surveyed by Bloomberg are positive on European equities, seeing about two per cent upside for the Stoxx Europe 600 Index this year, and nearly three per cent for the Euro Stoxx 50, compared with Tuesday’s close. The biggest bear in the poll sees the Stoxx 600 falling less than five per cent. 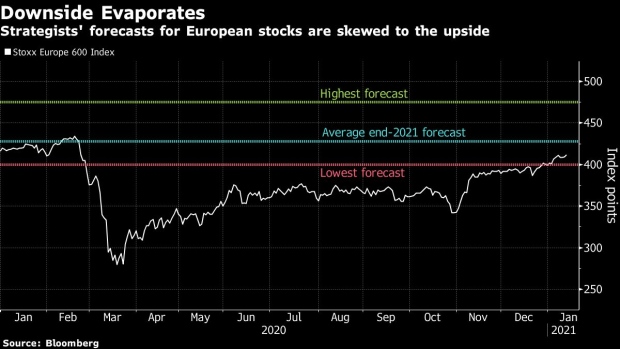 European equities have been enjoying a rally in February as a combination of vaccine progress and generous stimulus measures push the Stoxx 600 near the record high set just before the COVID-19 selloff a year ago. Value and cyclical sectors, such as banks, commodities producers and travel companies, have been leading the reflation trade-driven advance, with the likes of JPMorgan Chase & Co. predicting that the market has more firepower for the rest of this year.

European stocks are highly correlated with the economic rebound, and “we are about to enter the period of growth acceleration,” JPMorgan strategist Mislav Matejka, who sees the Stoxx 600 gaining about seven per cent by the end of 2021, said in emailed comments. Moreover, “policymakers are unlikely to start withdrawing excess liquidity any time soon,” he added.

If the broader European stock market could see limited upside, most strategists predict a leadership switch from shares of companies with the fastest growth to those that are cheap relative to earnings or book value. Financial and energy shares, which together account for about 20 per cent of the Stoxx 600, are tipped to be the main beneficiaries.

“Expect dispersion of performances to keep growing,” said Stephane Barbier de la Serre of Makor Capital Markets SA, the most bullish strategist in the survey. Financial, oil and gas and basic resources equities will lead returns, he said. The strategist sees an analogy to the “Roaring Twenties” a century ago, when the world came out of the Spanish flu pandemic with a strong economic rebound. He expects double-digit gains for European equity indexes from here through the end of the year. 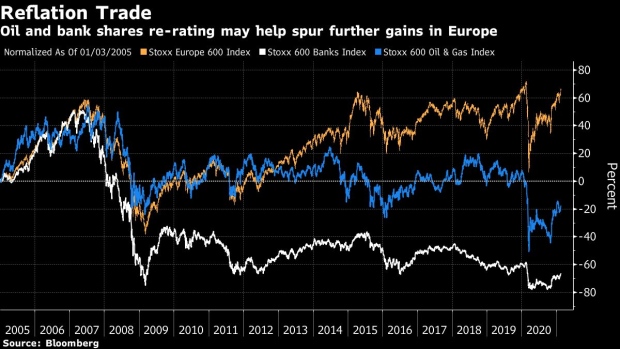 The Stoxx 600 and the Euro Stoxx 50 are both up almost five per cent in 2021, a pace that would lift the benchmarks by about 41 per cent for the full year. This performance is similar to that of the S&P 500, with strategists on average forecasting that the U.S. gauge can rise 3.6 per cent by the end of the year. In comparison, the MSCI Asia Pacific Index has beaten both European and U.S. benchmarks, jumping 9.4 per cent in 2021 on management of the COVID-19 crisis and as China’s economy recovers.

European stock prices have been rising much faster than earnings expectations, which have yet to recover from the pandemic hit, taking valuations to record levels.

But for those worried about lofty multiples in the European equity market, JPMorgan’s Matejka has a clear answer.

“Valuation multiples are elevated, but they are unlikely to derate during the phase of strong growth and earnings momentum, and the flow will continue to favor rebalancing towards reflation trades,” he said. One risk to watch is the scaling back of accommodative policy, Matejka added, but for that policymakers will need to see some “full-blown overheating in the real economy,” which is still far away, he added. 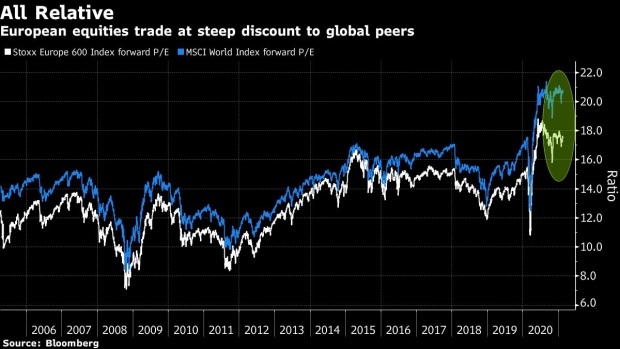 The range of the survey’s forecasts shows a positive risk-to-reward dynamic, with the most bullish strategist, Makor Capital’s Barbier de la Serre, seeing the index ending the year 13 per cent higher, while the most bearish Stoxx 600 prediction, from TFS Derivatives’ Stephane Ekolo, implies only 4.6 per cent downside.

“I’m not bearish but I’m cautious,” Ekolo said by phone, seeing a decoupling between fundamentals and performance. “Market participants are being too complacent and buying into the global economic recovery narrative, even though loads of bankruptcies and rising unemployment rate should be expected,” he said, adding fast-rising yields will have a detrimental impact on indebted companies and on the overall market.

Among professional investors, the overall bullishness shows no sign of abating, with fund managers taking more risk than ever, according to a Bank of America Corp. survey. European portfolio managers are even more bullish than strategists on the region’s stocks, with 9.5 per cent upside seen in European equities by the end of the year on average.