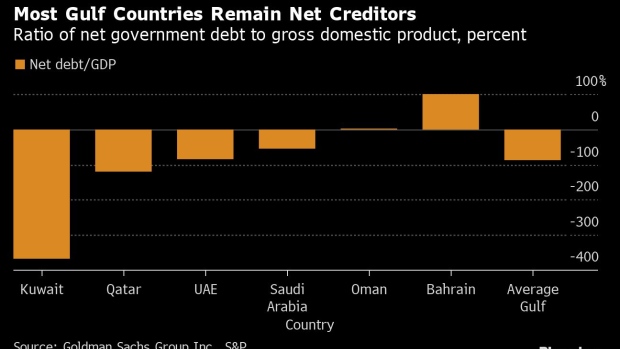 A flame burns from a stack at the oil processing facility at Saudi Aramco's Shaybah oil field in the Rub' Al-Khali desert, also known as the 'Empty Quarter,' in Shaybah, Saudi Arabia, on Tuesday, Oct. 2, 2018. Saudi Arabia is seeking to transform its crude-dependent economy by developing new industries, and is pushing into petrochemicals as a way to earn more from its energy deposits. , Bloomberg

Two of the richest oil economies are wading back into the world’s most important bond market for the first time in months.

Boasting a windfall oil revenue estimated at $818 billion this year alone, the oil-exporting nations of the Middle East like Saudi Arabia and the United Arab Emirates largely held out from buying US Treasuries through much of the global rally in crude prices.

The long period of restraint ended in June, the latest month for which figures are available. Saudi Arabia increased its stockpile by $4.5 billion -- the most since August 2020 -- to just over $119 billion, according to Treasury Department data. It’s still near the lowest level since 2017.

The neighboring UAE, whose holdings have dropped by more than a third since June 2021, added $1.6 billion. For the January-June period, foreign investors bought the most on data going back to 1977.

“In a period of inflationary pressure, the preference for dollar assets will only increase,” said Karen Young, senior research scholar at Columbia University.

Until now, the choice to abstain from what’s traditionally been the world’s safest and most liquid asset was a reflection of a new approach on the part of the Gulf’s oil exporters. Even with state coffers bulging with cash, governments in the region are increasingly looking to get higher returns from their stock of savings and pay down debt while diversifying their economies away from energy.

The case in point is Saudi Arabia, whose holdings of Treasuries are down more than 35% since early 2020, according to Bloomberg calculations.

Saudi officials earlier this year said the kingdom intends to hold billions of dollars from its oil income in a government current account until the end of 2022 and only then decide how to distribute the money, a shift from previous boom periods.

Any change in attitude toward Treasuries would mean a welcome dollop of demand for US debt after a period of outsized moves and amid concerns that the Federal Reserve’s interest-rate hikes will lead to a recession. Treasuries fell across the board on Tuesday, against a backdrop of growing concern over an economic slowdown in the US.

(Updates with drop in UAE holdings since last year in fourth paragraph. A previous version of this story corrected university name in fifth paragraph.)