Shares of The Green Organic Dutchman plunged Wednesday on the Toronto Stock Exchange after the company announced a review of financing alternatives after it was unable to find sources of new capital needed to help complete two growing facilities.

The Toronto-based cannabis producer stated in a release that it had been in discussions for potential financing with commercial banks and via equipment leasing, but said that “due to changing market conditions, those sources of financing have been unavailable on acceptable terms within the timeframes required.”

Shares of U.S. and Canadian publicly-traded cannabis companies have moved broadly lower over the past year amid regulatory woes, disappointing earnings, ongoing retail store issues, and an emerging vaping-related health crisis. The closely-watched Horizons Marijuana Life Sciences Index ETF is down about 55 per cent since it peaked just under a year ago.

TGOD warned in its statement that it may revise the construction schedule of its facilities in Ancaster, Ont. and Valleyfield, Que. if it unable to obtain financing on “reasonable terms, within the required timeframe”. It added that there is no assurance that this review of its financing alternatives will result in new sources of funds. 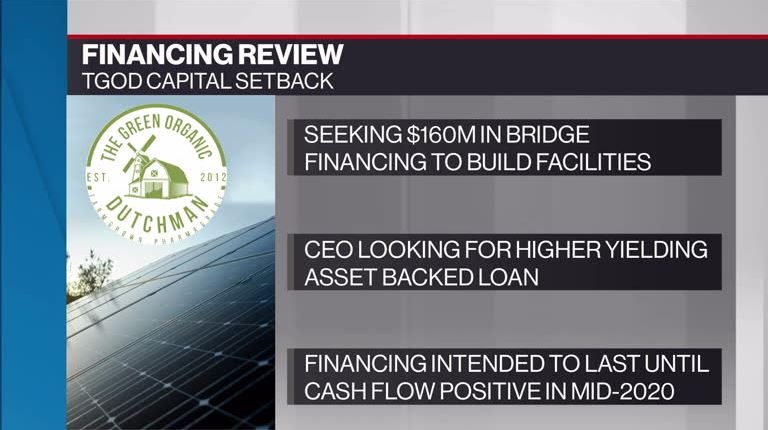 In a phone interview with BNN Bloomberg, TGOD Chief Executive Officer Brian Athaide said the company is looking to secure about $160 million in bridge financing to allow it to finish building its two production facilities, as well as working capital for inventory and receivables. Athaide said he originally had two asset-backed loans in place, but the bank TGOD was dealing with opted to wait to complete its financing deal until the company’s new facilities were operational and had begun selling cannabis to the legal market.

“With issues from other [licensed producers] missing expectations, and more recently, analysts reducing expectations for next year because stores aren’t opening as fast, all of that has changed the overall market dynamic,” said Athaide.

Athaide added he’s hoping to secure an asset-backed loan with a yield in the “low double-digits” with a non-traditional lender. Athaide expects that financing to last until mid-2020 when the company is projected to become cash-flow positive and have the ability to re-finance its loans.

The company has no debt on its balance sheet and $56.7 million in cash, including $40.2 million in restricted cash allocated to capital expenditures. It generated $5.3 million in revenue in the first six months of the year, while posting a net loss of $30.7 million during that period.