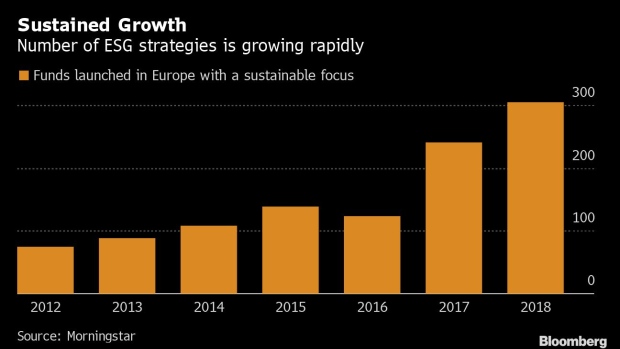 Workers clean a heliostat panel at the Cerro Dominador Solar Thermal Plant in the Atacama desert in the commune of Maria Elena, Antofagasta region, Chile, on Wednesday, Aug. 1, 2018. Cerro Dominador, South America's only solar-thermal project, will be a breathtaking piece of engineering, with 10,800 giant mirrors focusing light to the top of a tower more than twice the height of the Statue of Liberty. Photographer: Cristobal Olivares/Bloomberg , Bloomberg

(Bloomberg) -- A new breed of environmentally conscious investor is starting to bet against losers in the race to save the planet.

From boutique money managers to French behemoth BNP Paribas SA, financial firms are setting up sustainability-focused mutual funds that mimic hedge-fund tactics. In an unusual move, they’re not only buying stakes in the companies favored by green investors, but also shorting firms that are failing to make the shift to sustainability.

Short-selling is the newest trade evolving in a sustainable investment market that’s reshaping the asset management landscape. With the proliferation of more than 1,900 funds worldwide chasing a relatively narrow universe of ethical investments, some investors say that betting against laggards may present a wider array of opportunities.

“There are a lot fewer companies that have good solutions than don’t,” Joe Mares, a former natural resources analyst for hedge fund manager Greg Coffey, said in an interview. “There are plenty of companies out there that we think could be interesting on the short side.”

While assets in sustainable investment strategies rose to $30.7 trillion in Europe, U.S., Japan, Canada, Australia and New Zealand, the most popular approach is still negative screening, which means excluding so-called offenders from funds. Short selling those companies takes that idea to another level, allowing some funds to actively profit from betting against companies on the exclusions list and also drive down demand for unsustainable stocks.

Mares started a $25 million mutual fund at Trium Capital in late September to make long and short bets in high-emitting sectors like energy and transport. It will buy stakes in firms that stand to benefit from the transition to cleaner energy and short those that are getting left behind.

Chad Slater, who runs an ESG fund at Morphic Asset Management Pty Ltd., excludes investment in companies involved in environmental destruction, and allows betting against them.

The Morphic fund is similar in some ways to a traditional hedge fund, but incorporates its clients’ ethical principles into the process, Slater said in an interview. Short-selling may additionally increase these companies’ costs and draw attention to their failings, he said.

Read more: Here’s How ‘Green Finance’ Aims to Save the Planet: QuickTake

Among the fund’s short bets is Huadian Power International Corp. Ltd., a Chinese electricity firm. “As a coal-fired power producer, we couldn’t own that on the long side, but under our mandate we can short those stocks and profit from that,” he said.

Morphic is short Coca-Cola Amatil Ltd., the Australia-based bottler of the famous soft drink. The asset manager has publicly questioned Coca-Cola Amatil’s commitment to sustainability, and has said it isn’t doing enough to alleviate the effects of sugar on obesity, particularly in the poorer parts of the Asia-Pacific region, according to fund filings.

The fund also added a bearish position in Qantas Airways Ltd. last year, a bet driven by slower global growth fears and growing pressure on carbon emissions, according to filings.

Strong returns posted by ESG strategies may be a factor in spurring more funds to look at sustainable investments. Funds that take ESG factors into account in their investment decisions perform better than those that don’t, according data compiled by Morningstar Inc. The research firm said that 73% of its ESG indexes outstripped their non-ESG equivalents since their inception.

The performance of energy companies shows a similar trend. A broad measure of energy stocks, the iShares Global Energy ETF, has returned almost 5.5% this year compared with almost 30% for a narrower index of clean energy companies.

Hedge funds themselves have been slow to jump on the ethical-investing bandwagon, but that’s now changing: 30% now say ESG informs their investment decisions, according to Preqin research earlier this year.

“The hedge fund industry has traditionally seen itself like swashbuckling pirates sailing the oceans of alpha, not constrained like long-only managers,” Slater said. “The idea of excluding sectors or stocks goes against their ethos.”

To contact the reporter on this story: Lucca de Paoli in London at gdepaoli1@bloomberg.net