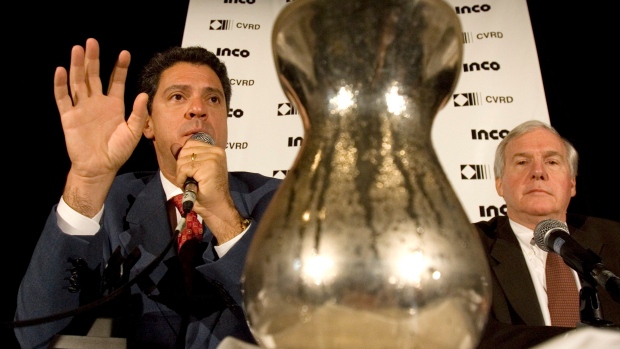 Ten years ago this Saturday, a global mining gem slipped out of Canadian fingers.

On Sept. 24, 2006, Canadian nickel miner Inco agreed to be bought by Brazil’s Vale in a $19-billion takeover. The announcement of the acquisition came just weeks after fellow nickel giant Falconbridge was acquired by Xstrata of Switzerland (now part of Glencore) in an $18-billion deal. The previous year, Falconbridge had combined with another Canadian mineral giant, Noranda.

The Inco sale “further undermines Canada’s status as a force in the mining industry,” the New York Times proclaimed at the time of the acquisition.

The two takeovers rankled because both Inco and Falconbridge sat atop a mineral lode in in Sudbury, Ont., which is among one of the greatest deposits on Earth. Vale itself calls the northern Ontario city “the mining capital of the world,” adding that its operations there “are among our largest on the planet, employing approximately 4,000 people.”

The foreign takeovers of Vale and Falconbridge dismayed business leaders and mining industry observers because the two companies had contemplated their own merger, which would have created a Canadian colossus.

“We were hoping it would be a global giant,” said Vic Pakalnis, associate vice-president for mining innovation and technology at Sudbury’s Laurentian University. “Then we’d have been on the world stage,” he said, with a company that rivalled giants such as Rio Tinto or BHP Billiton.

The Globe and Mail called the failure to merge “the great Canadian mining disaster.” At the time, reporter Jacquie McNish said it was “a debilitating mix of corporate caution, personality clashes, political naiveté and shareholder revolts” hogtied the two Canadian mineral giants.

‘WE HAVE LOST CONTROL’

But an even bigger transaction followed in 2007 when Rio Tinto pulled off a US$38-billion cash takeover of Alcan.

"I sometimes worry that we may all wake up one day and find that as a nation, we have lost control of our affairs," warned Dominic D'Alessandro, then-CEO of Manulife Financial.

In 2006 and 2007, there was a tidal wave of other takeovers. Dofasco, Fairmont Hotels and Stelco were also sold.

The Globe and Mail estimates that “when the dust had cleared, roughly $300-billion worth of corporate assets had slipped into foreign hands and some historically important sectors had lost their Canadian champions.”

Canadian resource companies sold themselves at or near the top of the market – a smart move in stock market terms. Rio Tinto’s purchase of Alcan almost immediately lost its lustre as China flooded world aluminum markets. Rio was forced into a US$15-billion rights issue and took more than US$8-billion in charges.

But the feeling that Canada lost its grip on vital sectors still rankles. Earlier this month, after Potash Corporation of Saskatchewan and Calgary’s Agrium agreed to merge in a deal that would create a global agricultural giant worth about US$36 billion, comments from Agrium’s boss underlined that sentiment.

“Canada has been hollowed out, and this is an opportunity to create a leading company,” Agrium chief executive officer Chuck Magro told the Globe.

PotashCorp itself was the subject of watershed moment in Canadian investment policy in 2010 when the government of Stephen Harper blocked a bid by Anglo-Australian BHP.

The mining takeovers a decade ago did have a negative “impact on places like Sudbury,” according to Mark Selby, a former Inco executive and now CEO of RNC Minerals. He reckons that within huge global miners, Canadian operations received less management attention. For example, Vale “spent a pile of money on the iron ore business.”

Laurentian’s Pakalnis said Vale should be credited with heavy investment to continue cleaning up the environment in Sudbury, which was tainted by a century of mining that originally involved horrific pollution from burning trees and ore together in great piles.

But, he said a merger between Inco and Falconbridge would have cemented the city’s position globally: “Sudbury would have been more of a hub.”

Teck Resources CEO Don Lindsay said in 2010 that Canada lost head offices of “leading companies that employed a lot of people – and they required services, from finance to legal, accounting and engineering. There is no question that has diminished substantially, and it is a loss for Canada.”

A decade later, chunks of the Canadian mining sector are still foreign owned but there are plenty of  big domestic players.

Here’s a ranking of the biggest miners in Canada by 2015 revenue, taken from the Financial Post’s FP500 list. (BNN couldn’t find a number for Glencore’s revenue in Canada and has contacted the company to ask for an estimate.)

A respectable seven – all but Rio Tinto Alcan, Vale Canada and Rio Tinto-owned Iron Ore Co. of Canada – are nominally Canadian. However, in a global mining market where shareholders can be anywhere, lines are blurred. First Quantum said this year that CEO Philip Pascall is based in Australia, while president Clive Newall is based in England. And Turquoise Hill, a miner in Mongolia, says CEO Jeff Tygesen is based in Utah. Turquoise Hill is controlled by, yes, Rio Tinto.

In terms of ownership of the mining industry, Statistics Canada estimates that in 2014 about 68 per cent of the total assets in Canada’s mining industry (excluding oil and gas) were under Canadian control. That was down sharply from 89 per cent in 2000.

Toronto is still a world force in raising money for the industry. The Toronto Stock Exchange says 53 per cent of global mining financings were conducted on the exchange, while its smaller Venture cousin last year raised a total $6.8-billion in equity capital.  By Aug. 31, that had already climbed to $7.5-billion so far in 2016.

But looked at another way, Canada is a bit player when it comes to owning the biggest producers. PwC’s list of the top 40 companies in the sector worldwide, based on market capitalization at the end of 2015, contained just six Canadian names: PotashCorp., Goldcorp, Barrick Gold, Agnico Eagle, Silver Wheaton and Cameco. (PotashCorp made it into the top 10 at No. 9)

The Key figures in the Inco-Vale takeover: Where are they now?

The former Chairman and CEO of Inco retired in Jan. 2007. He served on the boards of Manulife Financial and a number of not-for-profit institutions before being appointed chairman of Royal Nickel (RNX-T) in 2008. Weak nickel prices prompted the company to change its name to RNC Minerals earlier this month and announce it was moving its focus to gold and copper.

The Harvard Business Review once ranked Agnelli as the fourth best-performing CEO in the world behind counterparts at Apple, Amazon and Samsung.  Despite that reputation, Agnelli was ousted from his position at the Brazilian mining giant in 2011 at the request of the Brazilian government. The banker had run afoul of the ruling Brazilian Workers’ Party after firing more than 2,000 workers in the wake of the financial crisis as well as for his support of a controversial dam on the Amazon River. In March, 2016, Agnelli, his wife and two children died when the executive’s plane crashed shortly after takeoff in Sao Paulo, Brazil. Agnelli was 56-years-old.

After Xstrata took over Falconbridge in 2006, Pannell became Managing General Partner at Brookfield Infrastructure Partners (BIP.UN-T). Pannell has served as a member of the International Advisory Board of Garda World Security Corp. and was also a director with Major Drilling Group International Inc. Earlier this year he was named chairman of Agrium Inc. (AGU-T) which means he will once again be at the center of a mining mega-merger with the proposed combination of Agrium and PotashCorp. (POT-T)

The mining tycoon helped grow Xstrata from a small group of coal assets discarded by Glencore to a global giant that swallowed up Falconbridge in 2006. Davis remained at the company until 2013 when it was taken over by Glencore. Davis subsequently formed X2 Resources – a mining fund that has yet to close any major mining deals. Davis has also battled health concerns; after being diagnosed with type-2 diabetes, he lost more than 100 pounds and sticks to a strict low-sugar diet.

Less than a year after failing to acquire both Falconbridge and Inco in a bold takeover bid, Phelps Dodge was acquired by Freeport McMoran Copper and Gold Inc. (FCX-NYSE).  Whisler retired from the company but remains active on the boards of railway giant CSX (CSX-O) and Brunswick Corp (BC-NYSE)  – a company that makes boats, fitness equipment and billiard tables.