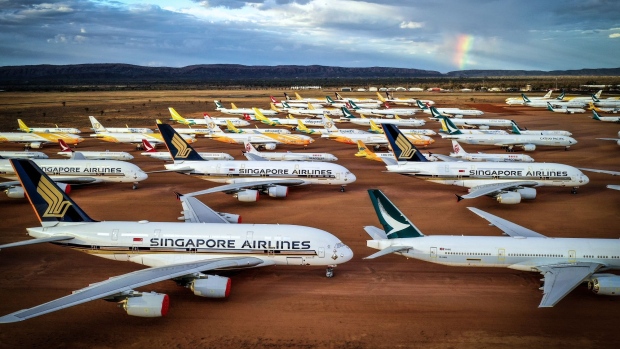 Serviced aircraft are sealed and stored at the Asia Pacific Aircraft Storage Facility (APAS) in Alice Springs, Northern Territory, Australia, on Thursday, Oct. 22, 2020. The APAS facility makes a strange and eerie sight, with the flat landscape punctuated by familiar tall tail fins against a brooding desert sky. More than 100 Aircraft are stored at the purpose-built facility adjacent to the airport, which can keep jets maintained and ready to be brought back into service when needed. , Bloomberg

(Bloomberg Opinion) -- How much risk will a vital hub of global commerce entertain to open an important chunk of the economy? None, appears to be the answer, judging by the suspension of the Hong Kong-Singapore travel bubble on the eve of its debut.

The two finance and transport centers hit pause on what would have been the world’s first quarantine-free bubble Saturday evening, citing a spike in Covid-19 cases in Hong Kong. After seeming to suppress the disease, the city witnessed a jump in infections last week, prompting new social curbs. Singapore says the travel lane will be reviewed in two weeks.

While the decision is understandable, it only goes to show that any kind of aviation and tourism recovery is tenuous in the absence of a widely distributed and proven vaccine. Service between the cities was supposed to begin with a few flights a week. Passengers could travel for any purpose, business or leisure, and weren’t subject to a controlled itinerary. (That's a distinction from so-called green lanes, which are for essential work and official purposes.) Officials had hoped that the symbolic start would grow into something more substantive — if they could demonstrate it worked safely. Optimism will be one casualty of the deferment.

The delay was all the more jarring because hours earlier, Singapore authorities insisted Sunday’s launch would proceed as scheduled. Officials even added provisional precautions, requiring arrivals from Hong Kong to take a Covid test upon arrival at Changi Airport and isolate for a few hours while they awaited results. Prior to that announcement, passengers were required only to take the test pre-departure in Hong Kong.In the end, it wasn’t enough to forestall an eleventh-hour U-turn. “I can fully understand the disappointment and frustration of travelers who have planned their trips,” Singapore Transport Minister Ong Ye Kung said in a Facebook statement early Saturday evening. “But we think it is better to defer from a public health standpoint... This is a sober reminder that the Covid-19 virus is still with us, and even as we fight to regain our normal lives, the journey will be full of ups and downs.”Airports in Hong Kong and Singapore are normally among the world’s busiest. While the bubble wouldn’t have driven a rebound itself, it may have stanched some of the bleeding.

Officials hoped the bubble would become a model for cranking up travel globally, and there was no small amount of anticipation in Singapore ahead of the scheduled launch. Doctors reported a jump in demand for coronavirus testing — an advance exam was a pre-requisite for boarding. Online searches for flights from Hong Kong to Singapore surged 300% within three hours of the Nov. 11 announcement. The Four Seasons Hotels and Resorts sent emails last week tempting guests to luxuriate in its lodgings in the two cities.The bubble pact already had a built-in mechanism to shut down if Covid infections were climbing. If the seven-day moving average of the daily number of unlinked infections is more than five in either territory, services would be suspended. A two-day notice period would be given, according to terms of the arrangement. In Hong Kong, the rolling average rose to 3.9 as of Saturday.  Singapore has worked hard to contain the coronavirus; the republic hasn’t reported any local transmissions since Nov. 10. It didn’t get there easily. Two months of lockdown have been followed by a very gradual reopening. Masks are mandatory, as is the use of tracing apps and social distancing. Work from home remains the default.

Quarantine requirements and restrictions on entry mean the travel industry, the source of much revenue for the city-state, is in deep freeze. Gross domestic product will contract as much as 6.5% this year, the government projects. That’s why the status quo comes with a great cost, as Ong told parliament last month: “What is at stake is not just hundreds of thousands of jobs, but our status as an air hub, Singapore’s relevance to the world, our economic survival, and in turn, the ability to determine our own future.”

Almost every commentary from the International Monetary Fund, World Bank, central banks and financial institutions is replete with warnings about the risks of early withdrawal of stimulus. Those august sermons might add a line about the risk of too much caution. Governments would do well to have a serious conversation with their citizens about what kind of infection rates are tolerable in the name of sustainable growth. Is an all-but-impossible guarantee of safety worth the deep economic scarring both cities have endured?