In December, Aaron Moore bought an unremarkable three-bedroom house in the Toronto suburb of Brampton and, after throwing on a fresh coat of paint and laying down new hardwood floors, put it right back on the market.

Normally this kind of quick-buck speculation would be interpreted by economists, policy makers and finance types as the indisputable sign of a housing bubble. But Moore has been a professional house flipper in the Toronto area for more than a decade now, during which a seemingly endless line of illustrious doomsayers have taken the other side of his bet on real estate in word and deed, only to be proven wrong.

One of the earliest was Mark Carney, then Canada’s central bank governor but soon to take over the Bank of England, who called the country’s reliance on housing wealth “ unsustainable” back in 2012. Then came the wave of American financiers, one after the other, whose collective bet on a Canadian housing crash got its own nickname, “The Great White Short.” Many of them, like Steve Eisman of The Big Short fame, applied the lessons they had learned in the bursting of the U.S. housing bubble years earlier.

When COVID-19 hit, even Canada’s own national housing agency seemed sure this was finally the end, predicting a dive in home values ranging from bad to catastrophic. But instead the market went on to another record year, even surpassing the gains in the red-hot U.S. market, and the housing agency’s leader had to take to Twitter to say they’d gotten it wrong, shortly before being replaced. 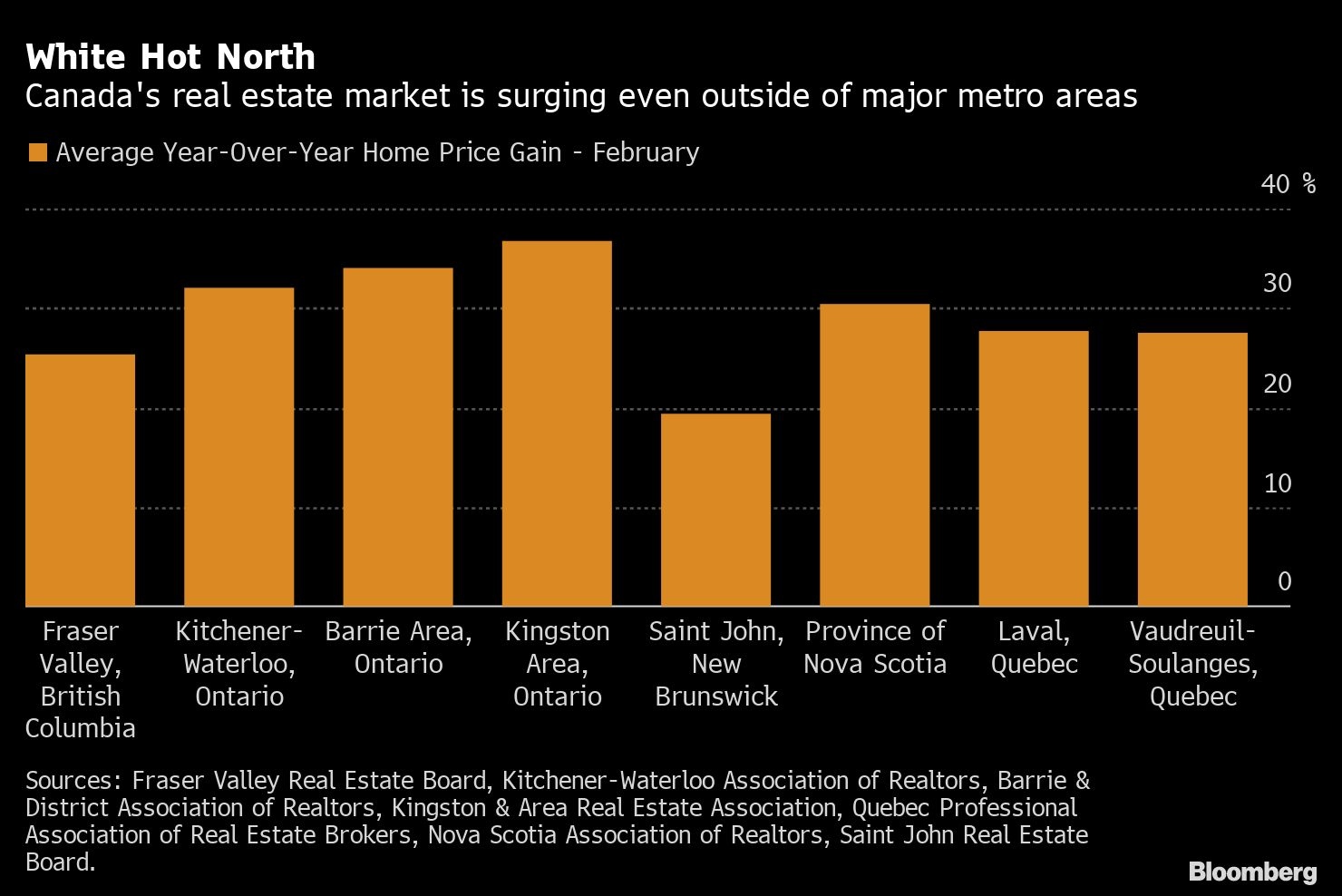 Urban-dwellers, now free to work remotely, have been moving further afield in search of larger homes, bidding up prices beyond what locals can afford. Photographer: Cole Burston/Bloomberg

Through it all, Aaron Moore just kept on buying and flipping.

Standing in the Brampton house days before he listed it, Moore seemed puzzled as he thought about all the doom-and-gloom forecasts he’s heard over the years. They struck him as odd. “It would take something crazy, like a communist government, for me to lose my faith in the Toronto market.”

Canadians’ mortgages have helped create one of the largest consumer debt piles in the world, and its financial system’s exposure to those loans is twice that of the U.S. With prices already at record levels, Canada’s housing market kicked off 2021 by going into overdrive, posting annual gains of 30 per cent in many communities across the country.

And yet the bears who had so boldly predicted the end of the party have largely fallen silent -- having become afraid, it would seem, to attract further attention to their money-burning calls. As they fade away, a new and in some ways even more troubling question is starting to be raised in policy circles in Toronto and Ottawa: What if the bubble doesn’t pop? What if prices just keep going up and up?

Their concern is that this would only further cleave apart the haves and have-nots in Canada. In the past two decades, the country’s major cities have posted the worst deterioration in housing affordability among the world’s major metropolises, according to urban planning consultant Demographia. That’s putting what’s traditionally been Canadians’ surest path to middle-class stability -- home ownership -- out of reach for many people not already in the market and exacerbating the inequality gap. 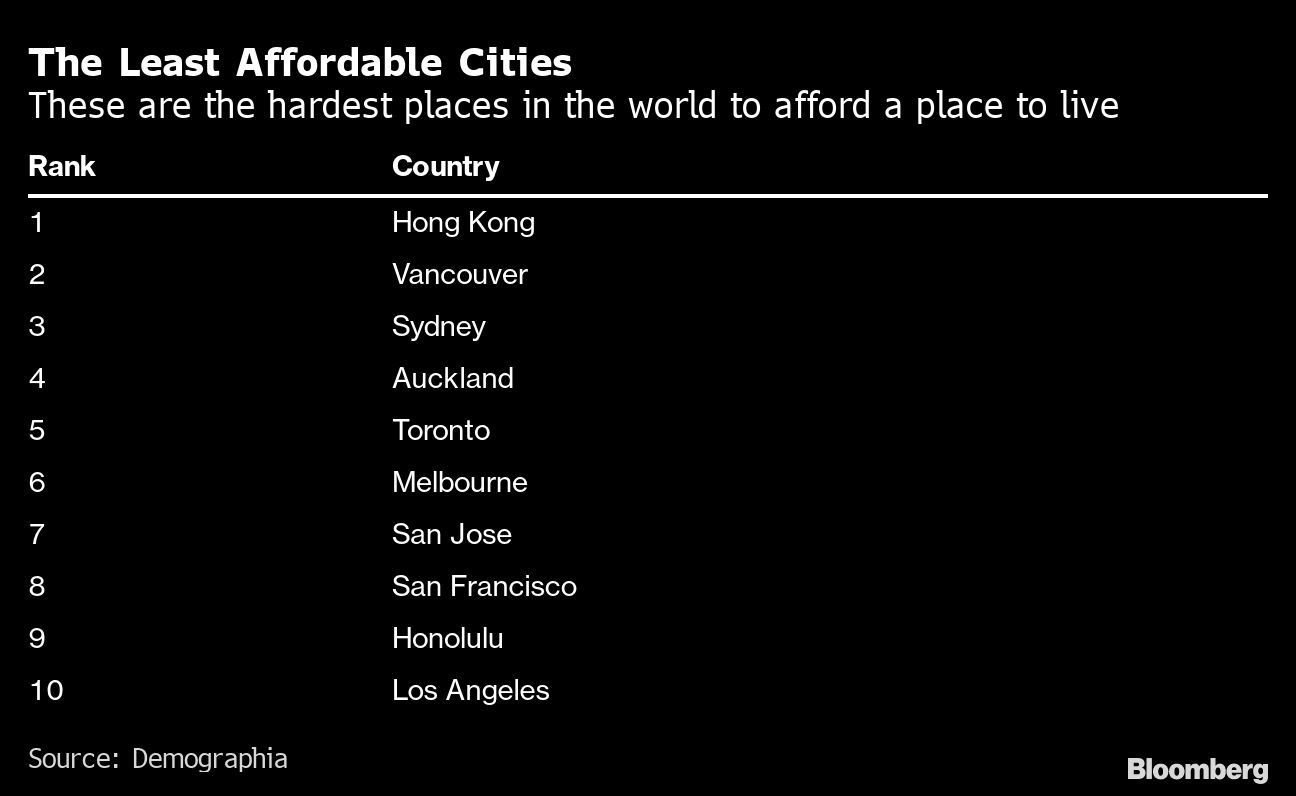 As an ever greater chunk of the economy is devoted to housing, concerns are mounting that there’ll be less room for more productive uses of capital.

“The housing market is on fire, and there doesn’t seem to be anything to put out the fire,” said Sal Guatieri, a senior economist with the Bank of Montreal. “We’re spending a lot more keeping a roof over our heads than we are on machines and factories and AI. A much greater share of our economy is now devoted to residential construction as opposed to non-residential structures, or just straight spending on machinery and equipment. That fundamentally is not healthy.”

For both housing bulls and the reformed shorts whose bearish bets have failed, Canada’s unusual capacity to absorb immigrants often tops the list for why the housing market hasn’t, and won’t, collapse.

Before the pandemic, the country was welcoming more than 300,000 newcomers a year, almost singlehandedly driving the fastest population growth among Group of Seven industrialized nations. These aggressive immigration targets enjoy popular support, but all these newcomers need a place to live, and in the major cities where they arrive they’re met by the other pillar of Canada’s residential real estate boom: a shortage of housing supply.

Toronto and Vancouver have long contended with some of the lowest rental vacancy rates in North America as slow re-zoning processes meant the addition of new apartment stock perennially lagged demand. And when it comes to ground-level homes, the constraints get even tighter. The cities are hemmed in by large bodies of water on one side, and regulations limit urban sprawl.

In Canada’s metropolises, Tony Soprano’s advice to buy land “cause God ain’t making any more of it” may be even truer than in northern New Jersey, thanks to local regulators. It’s this dearth of housing supply combined with the plunging interest rates caused by the pandemic -- the average rate on a common fixed-rate mortgage in Canada was 1.97 per cent at the end of 2020 -- that has propelled home prices to new heights, even with immigration falling. Data released Monday showed the frenzy only gaining momentum, with February posting the largest ever monthly increase in national benchmark home prices.

“In Canada, you have zoning rules that limit development around the major metropolitan areas and that will keep a lid on supply,” said Rod Bolger, chief financial officer of Royal Bank of Canada, the country’s largest mortgage lender, whose internal base case assumes another 25 per cent rise in prices over the next five years. “Then on the demand side, once immigration resumes, those two factors in combination should continue to lead to traditional economics putting upward inflation over the long term on housing in Canada.”

That has concern starting to shift from the market crashing to it rising too fast. Things are starting to get a bit loony: in Toronto a detached garage -- sans the home -- was recently listed for sale for $729,000. In Woodstock, Ontario, a city of about 40,000 southwest of Toronto, the average increase in home values last year was greater than most residents’ annual income.

The garage listed for sale for $729,000 in Toronto. Photographer: Cole Burston/Bloomberg

Speculation may also be on the rise: In January 6 per cent of all houses listed for sale in Toronto’s suburbs had been bought in the previous 12 months, up from 4 per cent a year earlier, according to brokerage Realosophy. 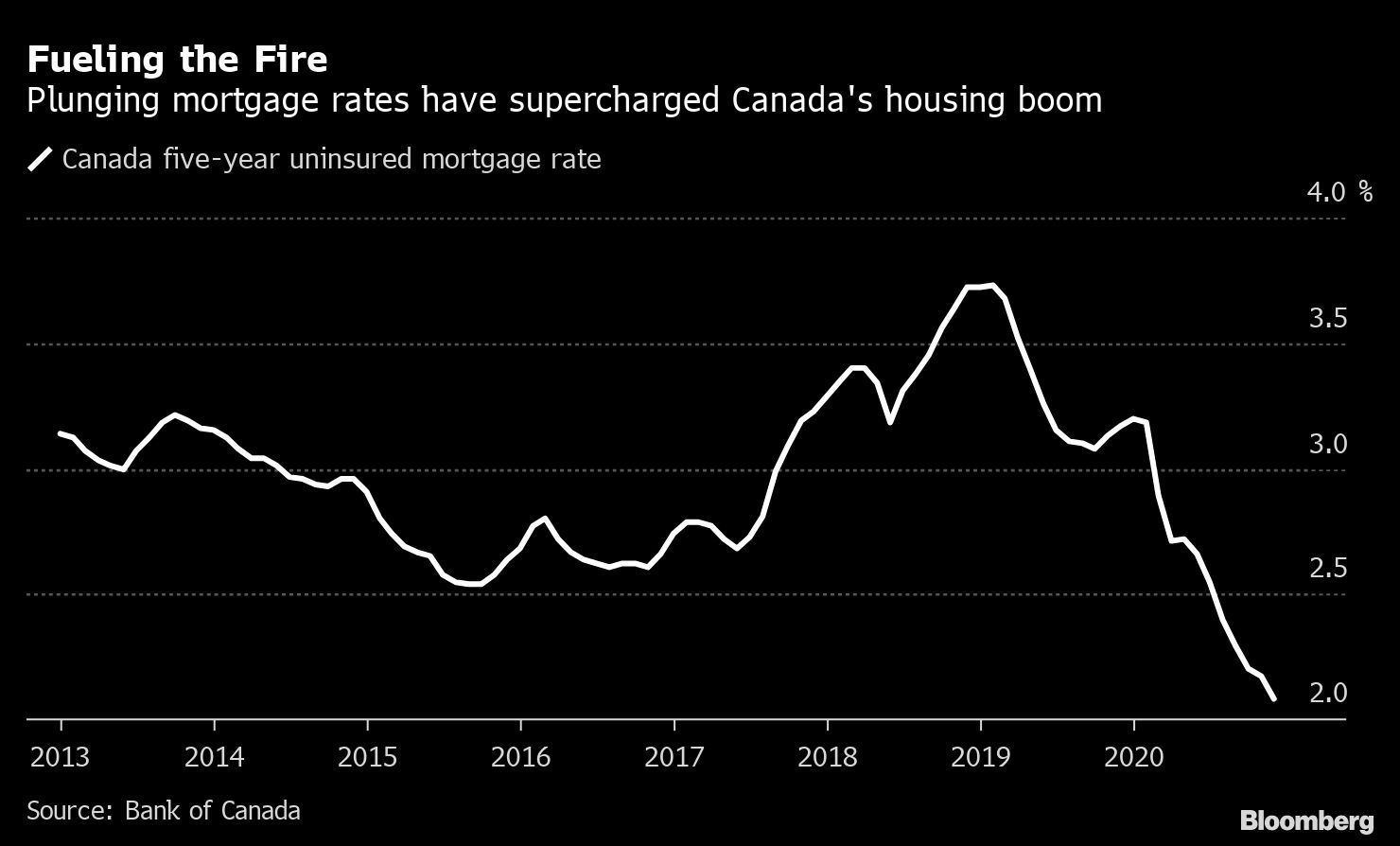 All this has caused people’s ability to afford a place to live to deteriorate rapidly. This year, Demographia named Vancouver the second-least affordable city in the world, trailing only Hong Kong. Back in 2006, the city ranked 15th on the list. Toronto’s ranking went from 37th to fifth.

And thanks to the pandemic, the two cities are now exporting their housing problems to small towns across the country as urban-dwellers, now free to work remotely, move further afield in search of larger homes, bidding up prices beyond what locals can afford.

These problems are starting to cause an outcry. Canadian policy makers from Prime Minister Justin Trudeau to Toronto Mayor John Tory have signaled they’re considering implementing new taxes in an effort to make homes more affordable. And economists at the country’s major banks have begun warning that the market risks being overtaken by a speculative frenzy if the government doesn’t act.

But Canada’s long housing boom has seen policy tweaks before, from changes to down payment rules to taxes on foreign buying and ownership. In the end, these measures just proved to be speed bumps in the long ascent of Canadian home values. And with housing inventory across the country at the lowest level on record and the Trudeau government ratcheting up immigration targets to make up for last year’s lull, there’s every reason to think the trend will continue.

“Everybody has an interest in keeping this going, that’s the part that I didn’t realize,” said Jared Dillian, an investor, financial newsletter writer, and contributor to Bloomberg Opinion who had initiated his own bet against the housing market back in 2013. He pulled the plug on it last year. “There were a lot of people who said that Canada is different and there’s lots of immigration and all kinds of reasons why the Canadian housing market is different. They ended up being right.”