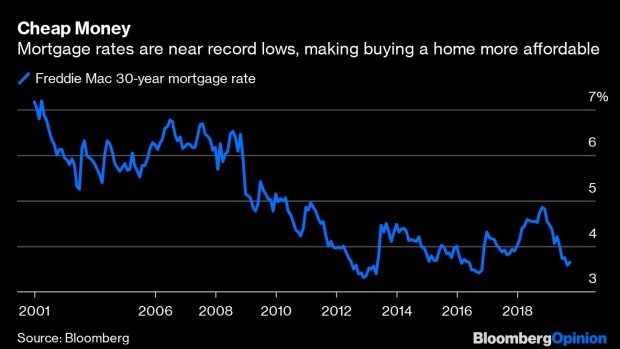 (Bloomberg Opinion) -- One place where the Federal Reserve's “mid-cycle adjustment” is playing out according to script is in the housing market, which at 15% is the single-largest contributor to the U.S. economy.

Housing is the most interest-rate sensitive sector of the economy, meaning it stands to benefit more than any other from the Fed having cut its target interest rate by a half a percentage point since July. Indeed, mortgage rates have fallen by more than a percentage point over the past year in anticipation of the Fed easing, providing much needed relief to a residential real estate sector that contracted for six straight quarters through June.

The National Association of Home Builders’ Index of Traffic of Prospective Buyers turned positive in August and September, after declining in each of the previous 12 months. And August housing starts hit 1.36 million on an annualized basis, the most since June 2007. Although the bulk of the gains in starts lately have been in multifamily properties, it's encouraging that single-family housing starts, which are viewed more favorably as a fundamental driver of economic growth, did reach a seven-month high.

And while it's true that housing starts is a somewhat backward-looking indicator, permits to start construction came in at a 1.42-million-unit rate in August, the most since May 2007 and a sign of builders' confidence in the outlook for sales.

The trouble with tracking the housing market is that the data on a month-to-month basis tends to be bumpy, exaggerated by fluctuations in mortgage rates and the sometimes long period between purchase and closing. Converting the monthly noise into a quarterly series and combining new and existing home sales helps glean underlying patterns.

What those new patterns show is that new and existing home sales bottomed in the last three months of 2018 at an eight-year low after falling at an 8.1% rate over the prior 12 months. Since then, they’ve steadily risen to a 3.1% year-over-year rate, the fastest pace since 2017’s first quarter. Evidence backing this strength can be seen in applications to purchase a home, which are up 10% over the last year.

A separate way to gauge the strength of housing is through what’s known as the repeat sales index, measured via the “sale pair count,” or two arms-length transaction prices for a specific home at two distinct points in time. The data to devise this is contained within the S&P CoreLogic Case-Shiller Home Price Indexes. The 20-City sale pair count fell 0.3% in July from a year earlier, but likely traction in August and September would snap six straight losing quarters that featured a 10.7% drop in this year’s first three months, the low for the cycle. For context, the sale pair count was up 9.1% in the first quarter of 2017.

Corroborating evidence from here on out gets murky. The Real Estate Agent series within the Producer Price Index acts as a proxy for commission growth. In the run-up to the housing bubble, this series began falling ahead of declines in home prices and the number of real estate workers. It told us what was coming. The hope is that the 3.1% read in this year’s second quarter marked the cycle low; it has since risen to 3.6%.

Some economists note that the September jobs report suggests housing is buffeted by conflicting data. Gluskin Sheff & Associates Chief Economist David Rosenberg, who called the last housing cycle ahead of his peers, cited stagnation in job growth in residential construction, home furnishings and building materials outlets. As for the “alleged rebound in the housing market," he said "someone forgot to mention that to the realtors because we had 3,000 fewer agents on the job in September.”

Fresh data from Black Knight also question the housing turnaround story. In each of the past five months, 90-day mortgage delinquencies have been either flat or slightly up year-over-year. The Midwest floods easily explain August defaults rising 10% from the prior year in that region. But the month also saw defaults increase 8% in the south and 4.5% in the Northeast, leading Black Knight to warn that “though default activity remains historically low, this is a trend worth watching.”

On the most fundamental level, the current cycle is still beset by a dearth of entry-level homes as builders continue to gravitate toward high-end homes to offset steep labor and construction costs. This impediment will keep the trend toward renting alive, which could well suit the budget given that in September prime-age home buyers, or those aged 25 to 54 and who comprise 64% of the workforce, accounted for just 37% of the jobs created.

Perhaps the best that can be said is that the data in the service sector has been so bad, a surprise decline in the unemployment rate was not enough to derail market expectations for a third rate cut by the Fed at the end of this month. Another leg lower in mortgage rates may be the best that the housing market can hope to sustain momentum, especially if evidence of an inevitable recession continues to build.

To contact the author of this story: Danielle DiMartino-Booth at dbooth16@bloomberg.net

Danielle DiMartino Booth, a former adviser to the president of the Dallas Fed, is the author of "Fed Up: An Insider's Take on Why the Federal Reserve Is Bad for America," and founder of Quill Intelligence.