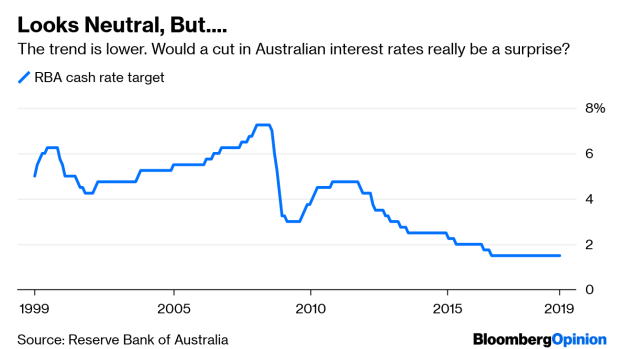 (Bloomberg Opinion) -- A new bestseller might be in the offing.

If the public could get its hands on it, that is. The Reserve Bank of Australia's board spent a chunk of its interest-rate meeting this month digesting a paper on the housing slump and what it foretells for that famous 27-year growth streak.

Consideration of the paper, revealed in minutes of the RBA's Feb. 5 conclave released Tuesday, may explain a lot. While the benchmark rate was kept at 1.5 percent, Governor Philip Lowe wasted no time in jettisoning the bank's bias toward a rate hike. He did that the next day, in fact.

It's not uncommon for the RBA board to review papers of economic interest, and doubtless Lowe has other things on his mind beyond bricks and mortar. Australia’s economic miracle has looked tired for a while.

But few things are of as much interest for the local economy or dominate public airwaves like the housing industry. It's a national obsession.

Prices are down from their 2017 peaks in Sydney and Melbourne by 12 percent and 9 percent respectively. In the minutes, the RBA called drops in Perth and Darwin “significant.” The word “housing” appears in the minutes more than 30 times, about three times as many as the word “China,” the country's largest trading partner and a one-time source of economic resilience.

Tellingly, the RBA minutes show policy makers fretting about the impact of the housing travails on consumption. The bank is placing a lot of emphasis on domestic demand in figuring out its next move on rates. By linking housing and spending explicitly, the RBA is implicitly shifting to a de-facto bias to reduce borrowing costs, even as it professes neutrality. At the very least, the bar to a cut seems lower than to a hike. The minutes said:

“From a longer-run perspective, members assessed that, following such large increases in housing prices, the effect of the recent price falls on overall economic activity was expected to be relatively small. However, members observed that if prices were to fall much further(1), consumption could be weaker than forecast, which would result in lower GDP growth, higher unemployment and lower inflation than forecast.”

The housing story isn't happening in a vacuum. Inflation is already below target, and a broadly based Chinese slowdown is also being felt.

Abandoning a predilection to higher rates is generally a sign that central bankers are preparing the ground for a cut, though they rarely say so at the time. The glass-half-full narrative is unlikely to return soon.

Now, to that mystery paper. If housing and consumption are to be so elevated in Australian monetary policy, the contents ought to be made public. Hard to see that happening soon. Pity.