Hybrid work will be messy and risks bringing the 'worst of both worlds': Harvard professor

Even in the 19th century, workers were beginning to resent the grind of office life.

“You don’t know how wearisome it is to breathe the air of four pent walls without relief, day after day,” British essayist Charles Lamb wrote in a letter to poet William Wordsworth back in 1822, railing against his toil in the East India’s Company’s office in Leadenhall Street, London.

For the last 17 months, however, Lamb’s modern successors have mostly worked from home, liberated from what he termed “official confinement.” Today’s white-collar staff are living through a radical transformation of professional life, one economists say is already beginning to jump-start economic productivity and accelerate innovation.

The pandemic has weakened the gravitational pull of city centers, with new forces now reshaping knowledge-based economies. Public transport journeys into cities are down, as are coffee shop sales, while demand for real estate in leafy suburbs is up. Americans spent more time on leisure and household activities in 2020, replacing commuter life with real life.

While a more permanent transformation of working life will have painful consequences for many inner-city businesses, economists see a recalibration underway that can revitalize smaller towns and suburbs. New digital tools mean that retail and hospitality — as well as knowledge-intensive industries — are already undergoing far-reaching change.

Working from home around one day a week will boost productivity by 4.8 per cent as the post-COVID economy takes shape, according to a recent study of more than 30,000 U.S. employees co-authored by José María Barrero of Instituto Tecnológico Autónomo de México and others. Much of that one-off increase is projected to come from reduced commuting time, a factor not usually captured by economists.

The transformation will deliver enduring benefits, according to Stephen J. Davis of the University of Chicago, who studies the evolving workplace and was one of the authors of the productivity study. The “positive consequences will be there indefinitely,” Davis said.

In remarks on Aug. 17, Federal Reserve Chair Jerome Powell alluded to a fundamental shift: “I think we know that we’re not simply going back to the economy we had before the pandemic, but it will take time to see exactly what the changes will be.”

“It seems a near-certainty that there will be substantially more remote work going forward. So that’s going to change the nature of work, and the way work gets done,” Powell said.

The clues were there before COVID-19 struck. In 2013, a landmark study by Stanford University’s Nicholas Bloom found that working from home boosted productivity by 13 per cent. A University of Oxford research paper in 2019 revealed that happy staff closed more sales.

Countries with stagnant productivity records will be paying close attention. In 2019, Britain lagged 15 per cent below its pre-crisis trend for total factor productivity, according to Bloomberg Economics. It’s a slump without parallel since Charles Lamb’s time, exacerbated by Brexit, an aging population and the pandemic. European peers have struggled, while the U.S. has found it hard to break away from the pack. 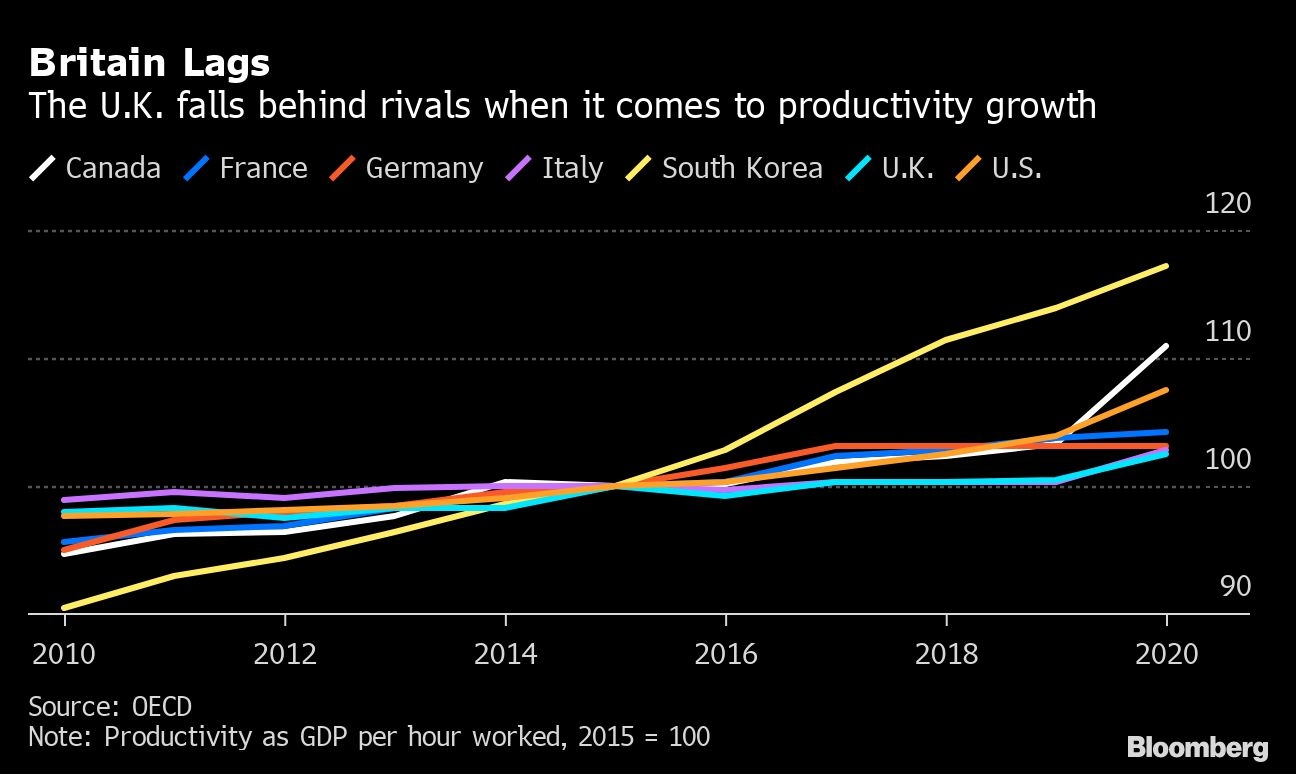 For all the optimism surrounding these tectonic shifts, some economists strike a note of caution. While recent research from the Federal Reserve Bank of San Francisco acknowledges that sweeping changes to the way people do business could boost efficiency, it warns against reading recent gains in productivity numbers as due to more home-working, citing data distortions.

Even the Bank of England accepts that hybrid meetings “may be more challenging.” A majority of managers worry about the impact of home-working on collaboration, company culture and wellbeing, according to the OECD, which also cited employers’ concerns about their diminished ability to observe employees at work.

A study led by the University of Chicago's Michael Gibbs found workers worked longer hours at home to perform the same task, as focused time was broken up by domestic distractions like childcare and online meetings. The report also noted that people working from home may exaggerate their productivity in surveys to encourage adoption of the practice.

Former U.K. government advisor Giles Wilkes is more bullish. “The ability to deliver products in different places, make more efficient uses of property, and so forth, that is productivity driving innovation,” said Wilkes, who recently published a report on Britain’s productivity woes.

“Hybrid working represents a change in the patterns of both demand and supply in a way that moves the economy forward.”

Yuri Suzuki does not miss his twice-daily 70-minute commutes. Suzuki, a partner at international design company Pentagram, used to travel on the “toxic” Central Line, a subway route bisecting London.

“After I came back home, I felt just exhausted — I couldn’t really think or create anything,” Suzuki said on a Zoom call from his home in the seaside town of Margate, Kent, where he has lived since the pandemic began.

Freed from the grind of travel, Suzuki finds he is able to “invest” time in creative thinking long after formal working hours. That has boosted productivity, with his team taking on double the number of projects than it did before the pandemic. To socialize with his team, Suzuki plans to return to the office around once a week.

At this point, with the delta variant spreading rapidly around the world, many corporate return-to-office plans are being put on hold. But evidence from almost 18 months of the pandemic is helping to inform C-suite decisions.

A glut of companies, new and old, want to marry the benefits of remote work with the efficiency of face-to-face meetings. Alphabet Inc.’s Google will let employees spend two days “wherever they work best.” Lazard Ltd., a 171-year-old financial advisory firm, is following suit for some staff. Asset manager State Street Corp. will close its two Manhattan offices, it said on Aug. 16. Even banking titans will allow some flexibility: Morgan Stanley’s Chief Executive Officer James Gorman sees office-working at “not 100 per cent but not zero percent” of total hours.

“Both workers and managers tend to say that two to three days a week of working from home is ideal,” said Chiara Criscuolo, who researches productivity for the OECD. Communication and professional relationships can suffer after that, she says. 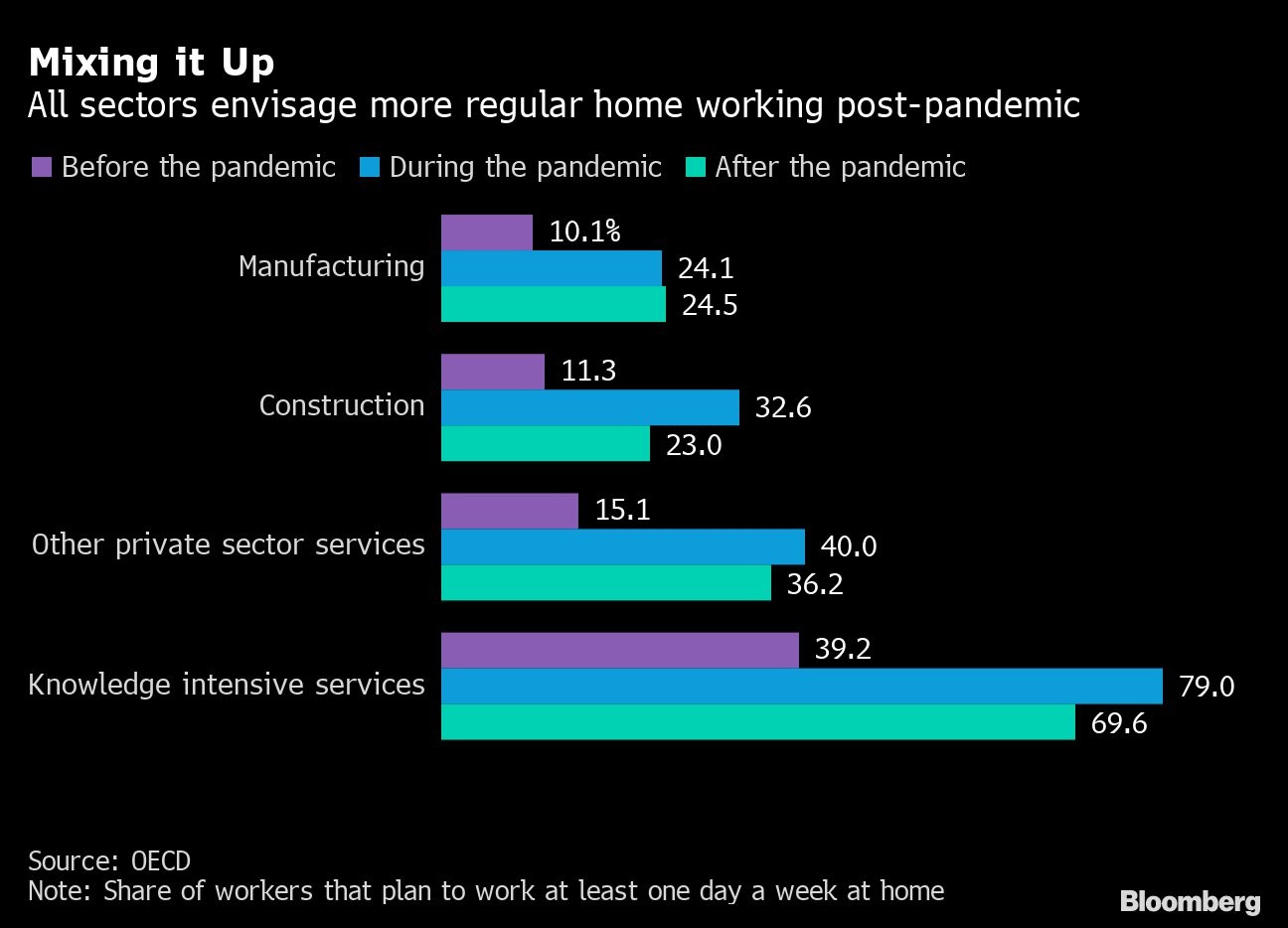 While hybrid work is taking root among educated, well-paid employees, less than half the workforce has that option, according to the McKinsey Global Institute. In the U.K. just 36 per cent of people did some work from home during 2020, even during lockdowns.

Still, as more work happens away from traditional offices, workers will infuse a wider range of communities with their wealth and business knowledge, distributing economic gains more equitably, according to Abigail Adams-Prassl, an economist at the University of Oxford.

That will have some painful consequences. City center cafes, shops and hairdressers catering to professionals are most exposed, with Bloom, Davis and Barrero calculating that a shift to partial working from home will hit annual spending in major U.S. city centers relative to pre-pandemic levels. Manhattan alone would see a drop of 13 per cent, they projected.

Wilkes concedes that “a lot of people” will be hurt by the process of change. Nevertheless, he says that “the changes that we’ve been forced into are going to be beneficial on the whole.”

Hybrid working also has the potential to encourage a more diverse range of people into the workforce, Davis believes, reducing longstanding productivity issues “by making use of the skills of people who were otherwise not working or not working very much.” That includes mothers and people living outside major cities.

The U.S. arm of consultancy PricewaterhouseCoopers LLP began ramping up some aspects of hybrid work — including flexibility on where and when to work and training on remote-work technology — back in 2017, says Chief People Officer Michael Fenlon. In 2018 the University of Southern California found that teams worked better and retention improved. The focus has sharpened since COVID-19 hit.

“Pre-pandemic we learned that a culture of trust was essential for well-being and flexibility. Teams that adopted this were reporting stronger relationships, stronger collaboration, better teamwork and stronger relationships with clients,” Fenlon said. “We’ve used the pandemic to become even more intentional and explicit.”

Employers the world over are now grappling with that shift as they try to balance productivity growth with keeping staff creative and happy.

It’s a conundrum that comes 199 years late for Charles Lamb. “My theory is to enjoy life, but my practice is against it,” he wrote to Wordsworth in 1822, lamenting his years spent in smoke-filled offices.

Lamb’s desk-bound successors — and their managers — will soon find out whether they can put their own theories into practice.