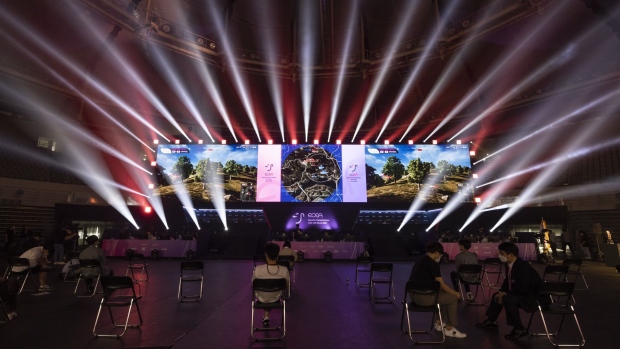 (Bloomberg) -- The once-thriving esports industry has fallen on hard times as funding sources dwindle and signs abound that athletic competition via video games doesn’t have anywhere near the earning potential investors anticipated.

Sports-business billionaires and gaming executives had hopes that esports could one day could scale into an organization like the National Basketball Association. But after a boom five years ago, several prominent esports teams and organizations, particularly in the US, are contracting, the result of a broad economic downturn, a venture capital industry that’s no longer willing to accept growth without profits and a crypto meltdown that has undercut a significant source of backing.

Since the summer, Team SoloMid and 100 Thieves—the two most valuable esports organizations according to Forbes—have terminated dozens of positions in total. In November, Evil Geniuses, one of the oldest esports groups, disbanded its North America team that competed in the highly popular game Defense of the Ancients 2 and shifted their operations to South America. Game publishers, too, are shrinking their esports operations and that’s trickling down to tournament organizers, teams and players. In early November, Riot Games said it will close its official Wild Rift leagues outside of Asia next year, choosing to focus solely on the world’s biggest mobile gaming market. And a popular Super Smash Bros. tournament was terminated after not getting a license from Nintendo Co.

“We have been operating our esports teams at a loss since inception,” said Ben Spoont, founder and chief executive officer of Misfits Gaming Group, who sold the organization’s slot to field a team in the League of Legends European Championship in July. “I had thought that by 2022, I’d have seen enough data to say, ‘We are there’ or ‘We’ll get there in the next year or two.’”

Investors who were once eager to get in early on what was expected to be a booming industry are now scrutinizing the business fundamentals and not much liking what they see. In 2018, a record $4.5 billion was invested in the industry, including from private equity firms jumping in for the first time, according to a report by Deloitte. That bounty has faded and venture capital investment in esports is the lowest it’s been since 2016—excluding 2020, when pandemic restrictions threw into question the viability of live esports tournaments—according to data provided by PitchBook.

The dissatisfaction is also reflected in the public markets. FaZe Clan, an organization of gaming celebrities and esports pros that helped pioneer the influencer marketing industry, went public via a SPAC in July and has seen its stock drop about 80% since then.

As originally envisioned, esports organizations were supposed to generate revenue by selling stadium tickets and merchandise or sharing profit with game publishers from large sponsorship and broadcast deals. Anticipating outsize success, traditional sports franchise executives paid $20 million to get in early on teams for Activision Blizzard Inc.’s Overwatch League and even more later for Call of Duty league teams.

Read more about the shaky future of the Overwatch League.But the revenue generators that worked for traditional sports, so far aren’t in esports. Even if major esports events can sell out stadiums, those tickets cost less than for an average American football or basketball game. Esports fans also spend far less on merchandise and digital goods than traditional sports fans. While 261 million people globally watch esports at least once a month, each enthusiast only produces $5.30 in revenue per year, according to industry tracker NewZoo.

Making matters worse, viewership for League of Legends’ Championship Series, one of the most mainstream leagues in esports, is at a five-year low, according to data aggregated by Esports Charts. As viewership declined, broadcast and streaming deals became less lucrative or less common for US and European esports leagues.  And, while traditional sports teams have been able to get local governments to offset the upfront costs of their operations with tax benefits and subsidies for stadium construction, esports teams weren’t able to get the same deals. Comcast Spectacor, owner of the Philadelphia Fusion Overwatch League team, started work on a $50 million esports arena in 2019 only to have it reimagined as a multiuse dining and retail facility.

All that has left the industry exceedingly reliant on outside investment. Sponsors and advertisers, like BMW and Red Bull, represent 60% of esports organizations’ revenue, according to NewZoo. But a global economic downturn caused the US advertising market to shrink by 7% in the second quarter from a year earlier and esports is not immune. The Overwatch League lost all of its sponsors ahead of the 2022 season, in part due to controversy over sexism at publisher Activision Blizzard.

Some sponsors have turned their attention to increasingly popular gaming influencers—namely Twitch streamers and YouTube creators like Tyler “Ninja” Blevins—who are better-positioned to capitalize on viewers’ attention than esports teams focused on competing and winning tournament prize pools. Live gaming viewership on Twitch and YouTube Gaming boomed over the pandemic while esports leagues struggled under lockdowns. Misfits’ Spoont said selling the the League of Legends European Championship slot was part of a strategy to expand the group’s emphasis on partnering with top creators like Minecraft YouTuber Toby “Tubbo” Smith and “QTCindarella.” Influencers are also a better bang for the buck than esports  teams, whose players’ salaries can be as high as seven figures. This year, salaries in the League of Legends Championship Series declined for the first time in years, according to two people with knowledge of the situation.

Some of the biggest recent sponsorship deals in esports come from the cryptocurrency industry. Deals from betting companies and crypto firms represented 15% of 2022’s sponsorships, according to NewZoo. The rout in the crypto market and collapse of crypto exchange FTX, which filed for bankruptcy after a liquidity crisis, has dried up funding from that industry. Last year, FTX paid Team SoloMid $210 million to change its name to TSM FTX. In November, after Sam Bankman-Fried’s crypto empire imploded, FTX TSM suspended the partnership and reverted to just TSM.

TSM spokesperson Gillian Sheldon said the FTX deal’s collapse had no impact on the team’s decision to downsize and lay off employees. “As is well known in the industry, most esports teams operate at an annual loss,” Sheldon said. “But the combination of high interest rates and the market cooling down has made raising additional capital difficult.” She added that TSM as an organization, which operates esports teams, manages content creators and runs a successful app called Blitz, is profitable.

In mid-November, a well-liked app for connecting the esports fandom called Juked.gg, shuttered after failing to find a buyer. “Esports has become anti-sexy to VCs who had been burned by the hype and sky-high valuations esports startups enjoyed a few years earlier, and most investors now understand that game publishers are the primary beneficiaries in esports,” wrote creator and former Twitch employee Ben Goldhaber, in a Medium post.

While many esports organizations seem to be moving on, focusing more on influencers and less on sports teams, some executives think game publishers should take more responsibility for the predicament teams find themselves in today.

“It’s important that publishers step in to find a solution to create digital revenue opportunities for the esports ecosystem they have built and benefit from,” said Arnold Hur, chief executive officer of esports organization Gen. G. “It’s clear that relying solely on media and sponsorship deals, especially in this kind of market, simply will not work.”