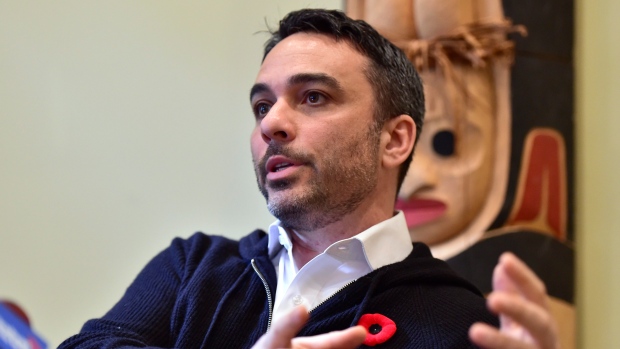 Brandon Stranzl, former CEO of Sears Canada, speaks to media regarding an Ontario court decision to grant the liquidation of the remaining Sears Canada stores across the country in Toronto on Monday Oct. 30, 2017. , The Canadian Press

As Sears Canada’s demise draws nearer, with liquidation just over a month from completion and more than 12,000 Canadians bracing for post-holiday unemployment, a clearer picture is emerging of the failed management-led bid that was designed to save the retailer.

According to documents obtained by BNN, a collection of influential investors, including a top New York private equity firm and the Canadian owners of a frozen yogurt empire, committed hundreds of millions of dollars to help preserve the company as a going concern.

Together, the firms agreed to loan as much as $450 million to finance an offer spearheaded by former Sears Canada executive chairman Brandon Stranzl before it was ultimately rejected by the retailer and the court-appointed monitor as too “conditional” and subject to “execution risk”.

After 65 years in Canada, Sears was granted creditor protection in June. The stated goal was to restructure the business, possibly find buyers and hopefully emerge a strong - albeit slimmer - version of its former self.

But within weeks of the CCAA court order, at least one key stakeholder publicly voiced skepticism the retailer would survive. Andrew Hatnay, a partner at Koskie Minsky representing Sears Canada pensioners, told the court the CCAA filing looked suspiciously like the “last gasp” of a dying retailer.

By mid-summer, it was clear Sears was running out of options.

On August 14, Stranzl sent an email, obtained by BNN, to all of the retailer’s associates, stating he was “committed to saving the business.” Days later, Sears announced Stranzl was stepping down from his day-to-day duties to focus exclusively on mounting a bid.

In late August, Ares agreed to help finance Stranzl’s going-concern bid, so long as the retailer provided more than $100,000 to perform due diligence checks, according to a source familiar with the matter.

The request was initially denied by Sears Canada.

“They were worried about a conflict of interest,” the source told BNN. “If the company advanced money to help Brandon’s bid, but not others, it could look bad.”

An October 1 letter from Stranzl’s lawyer addressed to lawyers representing Sears’ board of directors, alluded to the due diligence fees. In the note, obtained by BNN, Stikeman Elliot partner Samantha Horn lamented the retailer’s refusal to “provide any funding to forward the going concern bid” out of “concern about potential conflicts of interest.”

According to a court monitor report dated October 2, Sears eventually agreed to pay US$105,000 to finance the “work fees”.

But Stranzl and his partner, Los Angeles-based Baker Street Capital Management founder Vadim Perelman, were warned they had little time to assemble a deal. Concerned about the looming prospect of liquidation, they were already shopping around for a better deal, according to the source.

After briefly considering a transaction that would combine funds from Ares Capital and Goldman Sachs, Stranzl and Perelman approached Blackstone.

According to a commitment letter dated September 26, GSO Capital Partners, a division of New-York based Blackstone, outbid Ares and Goldman’s offer with an agreement to provide a $250-million loan.

The source told BNN the loan came with an interest rate below 10 per cent and would have seen GSO finance its own due diligence, a key sticking point in the initial bid.

“Sears was complaining about Blackstone,” another source familiar with the matter told BNN.

“They were looking to split hairs. Blackstone said, ‘We’ve done hundreds of deals like this, most of which are much bigger. And that standard agreement was 99 out of 100 times sufficient to make the monitor comfortable.’”

A letter dated September 29 outlines SPE’s agreement to provide a $50-million mortgage loan against 10 properties to be acquired in a going-concern deal.

SPE “didn’t feel comfortable coming in on the equity side,” a source told BNN. “[The loan] would have given Brandon the opportunity to close on the transaction and given him extra capacity to operate the business.”

In an unusual move, SPE waived all of its standard conditions.

“[SPE] wanted a week to do environmental studies to make sure what they got wasn’t contaminated,” said the source. “They decided to waive that. They literally bent over backwards to make this happen.”

The new bid, backed by loan commitments from GSO and SPE along with Great American Capital Partners and 3P Equity Partners, was submitted to Sears for review on September 25 and rejected in early October.

BNN reached out to all the stakeholders identified in this story and none agreed to comment for the record.

The specific conditions contained in the revised bid that were unpalatable to Sears Canada were never disclosed in publicly-available documents, nor voiced in court hearings.

But according to the court monitor’s third report, the proposal remained “conditional in a number of respects, and accordingly presents significant closing risk and uncertain recoveries.”

The report noted timing was a “key consideration”.

Not only was the retailer losing millions of dollars a week and facing increasing pressure from its lenders, the holiday shopping season was just around the corner. In order to maximize recoveries, lawyers representing multiple stakeholders argued liquidation had to start no later than mid-October.

“The Stranzl Group proposal as currently presented may not be executable within the timeline and liquidity available to [Sears],” added the monitor.

By the time the monitor submitted its fourth report, on October 11, “substantially all” of the deposit made by the Stranzl group to advance its bid had been returned.

“To a certain degree, could they have accepted Brandon’s offer and then Blackstone doesn’t show up with a cheque? Yes, that’s a possibility,” said a source. “But you weigh that against the merits of the offer and the reputation of Blackstone.”

"SET UP FOR FAILURE"

At a news conference in Toronto, Stranzl defended his turnaround plan and argued the CCAA process was biased towards liquidation.

“Everybody wanted there to be a going-concern solution that saved the jobs, but there were many obstacles and many rules that seemed to be in place to get in the way," he told reporters.

A source familiar with the discussions between Sears, Stranzl and the prospective financiers says the company was “essentially paying lip service” to its former executive chair.

“This thing was set up for failure from day one,” said the source. “Brandon’s offer was never given a bonafide chance with all the obstacles that were thrown at him. [Liquidation] was just the path of least resistance. You just kind of wind it all down, milk this thing for fees.”

Another source that was aware of the discussions between Stranzl, his partner and various Sears Canada stakeholders, disputes the process favoured liquidation.

“Obviously, a going-concern transaction that would have preserved jobs would have been an ideal outcome,” the source said. “But despite a lot of help from the company, including over $105,000 in respect of work fees paid to the lenders behind the Stranzl Group proposal, the proposal was not viable.”

Shortly after Stranzl’s final bid was rejected, Sears announced he was stepping down as executive chairman.

Having mounted the only bid with any hope – however distant – of passing muster, Stranzl’s resignation sealed Sears’ fate. Liquidation of all of Sears Canada’s assets started in mid-October and will continue into late January.

The liquidation process, like the retailer’s history, has been checkered. Shortly after shoppers were lured into stores advertising “everything must go” discounts, some customers complained prices were inappropriately marked up.

The monitor in November revealed Canada’s Competition Bureau sent letters to liquidators, demanding information on allegations they increased prices on some products before promoting 20- to 50-per-cent savings.

None of the liquidators, including an affiliate of Great American Capital Partners, responded to BNN’s requests for comment.

More than 12,000 Canadians will have lost their jobs by the time Sears Canada closes its doors and fades into retail history.