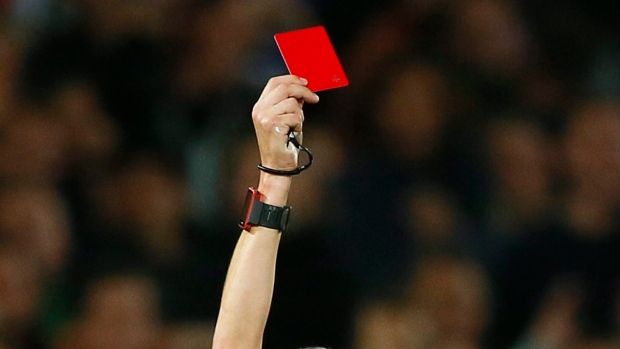 A referee shows a red card during a Champions League soccer match in 2017. , The Canadian Press

There are two types of soccer executives, according to 2011 testimony given by Chuck Blazer, then the highest-ranking American in international soccer: those who take bribes, and those who pay them.

That, in a sentence, is the central theme running through Ken Bensinger’s new book, Red Card: How the U.S. Blew the Whistle on the World’s Biggest Sports Scandal. In it, the Buzzfeed investigative reporter details how the unlikeliest of countries—the one that cares the least about soccer—became the one that finally exposed its criminal underbelly.

International soccer, in Bensinger’s telling, became a hotbed for corruption in the early 1980s, when such tournaments as the World Cup and South America’s Copa America became viable commercial properties. A rush of money gave rise to a new kind of business: the sports marketing company, a middle agent that bought the media and sponsorship rights to a specific league or tournament, then turned around and sold segments of those rights to broadcasters and advertisers around the world.

Bribes are a principal part of those transactions. FIFA is made up of six regional bodies that, in turn, host more than 200 national associations. Each region has its own set of tournaments, World Cup qualifiers and league matches to sell. In order to gain the rights at a lower price, sports marketers often paid executives under the table. Many of those payments were processed by U.S. banks—Merrill Lynch, J.P. Morgan Chase, Wells Fargo.

That last point is critical. Because if you were looking for the perfect person to expose the widespread corruption within international soccer, a cubicle on the third floor of the IRS office in Laguna Niguel, California, might be the last place you’d have looked.

Yet that’s exactly where the U.S. government’s far-reaching investigation into soccer corruption took off, specifically in 2011, when an IRS agent named Steve Berryman got involved. An American who had grown up in England, Berryman’s expertise in tracking illicit payments and tax evasion, combined with his love of soccer (he even rightly calls it “football”), made him uniquely suited to link bribes among sports officials and the marketing companies that buy and sell their rights.

Using the same tactics that convict crime syndicates, the U.S. government was able to follow the money as it passed through American financial institutions. It helped agents build a web of crimes that included tax evasion and bribery, wire fraud and money laundering. In citing the case of Al Capone, Bensinger compares Berryman not to Eliot Ness, the dashing G-man with the team of “Untouchables,” but rather Frank J. Wilson, an agent for the Treasury Department’s Intelligence Unit who connected the tax dots that would ultimately bring down the mob boss.

Berryman was a similar breed. “We do the financial s--- nobody else wants to touch,” he often said. And like Capone, Blazer was eventually caught on tax evasion. In exchange for a lighter sentence, Blazer agreed to work with investigators. Sitting in a conference room in the U.S. Attorney’s Office in Brooklyn, he explained how he’d skimmed US$20 million from North American soccer’s governing body, known by the acronym Concacaf, without paying a dime of taxes, and how illicit payments and back-room dealings represented the financial heart of international soccer.

Bensinger details Blazer’s infamous 10 per cent commission—on everything—as general secretary of Concacaf. He once paid himself US$300,000 of a US$3 million FIFA grant to build a television production studio on the 17th floor of Trump Tower. (Blazer’s own apartment in the building consisted of two adjoining units on the 49th floor, which he rented for US$18,000 a month.) Bensinger also notes that over a seven-year period, Concacaf paid US$26 million to American Express to cover expenses, which Blazer then used to earn enough points for 200 round-trip, first-class tickets from the U.S. to Europe. In 2011 alone, Blazer allocated himself US$4.2 million in commissions.

He had a US$900,000 beachside condo in the Bahamas, as well as two South Beach apartments and a Hummer, all paid by Concacaf. He was a frequent guest at Elaine’s restaurant in New York. And when Berryman started looking into Blazer’s finances, he discovered that Blazer hadn’t paid any taxes in 17 years. In fact, he had never filed a W-2.

The six-year investigation culminated in a pair of 2015 raids at the Baur au Lac, one of Zurich’s fanciest hotels, in which rooms begin at US$600 per night. The fallout eventually reached the highest levels of the sport. In total, 92 criminal counts were levied against 27 different defendants, not including subsequent investigations in other jurisdictions.

Blazer died in 2017 before being sentenced. His close friend and associate Jack Warner, former president of CONCACAF, remains in his home country of Trinidad, fighting extradition on charges of taking tens of millions in bribes. Warner is one of three consecutive CONCACAF presidents snared in the probe. It also indicted three consecutive presidents of CONCACAF’s South American governing body Conmebol.

Jose Hawilla, a Brazilian businessman who founded a prominent sports marketing firm, agreed to forfeit US$151 million to the United States when he began cooperating with investigators. An executive at another firm later admitted to paying US$150 million in bribes to dozens of officials.

Soccer fans looking for a timely read will find little in Red Card’s pages about the bid process for the 2018 World Cup in Russia, which starts this week. (Accusations abound.) Instead, Bensinger chose to focus primarily where investigators did: on the Americas. Along the way, readers will likely spot some familiar names, including Christopher Steele, the former British intelligence officer who first tipped off the FBI to the corruption within global soccer—but who is now famous for his dossier on Donald Trump—and Vitaly Mutko, the Russian politician who recently received a lifetime ban from the Olympics for his role in the country’s doping conspiracy.

Red Card, like the investigation it follows, serves as an opening chapter in the quest to clean up international soccer. As far-reaching as the investigation became, it did not focus on FIFA’s central governance or on the other regional bodies. Bensinger ends his book much as he starts it: with Berryman, the IRS agent and lifetime Liverpool supporter.

For his next act, Berryman is setting his sights on a lesser-known part of the soccer landscape. In 2016, he delivered a 3-hour Powerpoint presentation to prosecutors in Brooklyn to grant him the go-ahead to dig into Concacaf’s Asia counterpart, which was run by Mohamed bin Hammam from 2002 to 2011. The Qatar-based billionaire popped up a few times during Berryman’s original investigation, tracing envelopes of cash that bin Hammam delivered to Caribbean soccer bosses. His fingerprints are also all over the controversial decision to award the 2022 World Cup to Qatar.