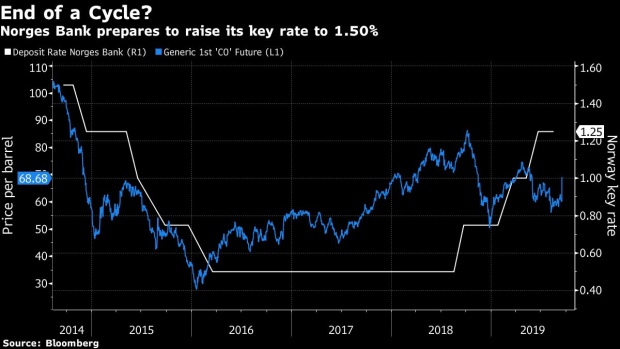 (Bloomberg) -- The central bank of Norway, dubbed by local economists as “the last hawk,” could this week be about to deliver its fourth interest rate increase. It may also be the last in the current tightening cycle.

Norway’s central bank Governor Oystein Olsen signaled as recently as last month that not much has happened to prevent him from sticking to the script at a rate meeting on Thursday. What’s more, oil prices spiked this week, providing a boost to Norway’s fossil-fuel-reliant economy, and the krone is about 4% weaker than its average level over the past five years.

But given the global uncertainties, many economists doubt that Olsen will dare to go against the wave of renewed stimulus led by the U.S. Federal Reserve and the European Central Bank. Fifteen of the 26 economist surveyed by Bloomberg expect an unchanged rate. The rest, including four of the biggest Nordic banks, anticipate a hike to 1.5% on Thursday.

Olsen, who has a stated preference for “leaning against the wind,” is trying to squeeze in a fourth hike since September last year to steer an economy that has bumped up against its capacity limits amid a surge in oil investments. Unlike most of Europe, Norway has also benefited from a generous fiscal policy, with the Conservative-led government tapping a record amount of the nation’s oil wealth over the past years to pay for tax cuts and surging infrastructure spending.

Olsen and his colleagues raised the benchmark to 1.25% in June, the third increase in less than a year. Policy makers in Oslo signaled that another hike could “most likely” come in the course of 2019, with a preference for September.

Here’s what those who predict an increase say:

Here’s what those who predict unchanged rates say:

To contact the reporter on this story: Sveinung Sleire in Oslo at ssleire1@bloomberg.net

To contact the editors responsible for this story: Jonas Bergman at jbergman@bloomberg.net, Tasneem Hanfi Brögger