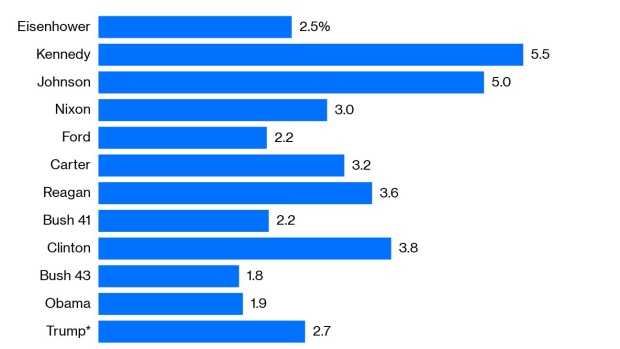 (Bloomberg Opinion) -- For too long, conservatives and libertarians have monopolized the cause of economic growth. Liberals and the left need to take it back.

Growth is a standard battle cry among Republican leaders. Jeb Bush, during his ill-fated 2016 run for president, promised 4% growth. President Donald Trump cut that target to a more modest 3%, but still emphasized growth as a goal of his agenda. This rhetoric is often supported by conservative think tanks – there’s even one called the Club for Growth.

To free-marketers, the recipe for growth is a simple one – cut taxes, reduce social spending and eliminate regulation. The Heritage Foundation, another conservative think tank, maintains a so-called index of economic freedom, and claims that moving up on this index will boost growth. The American Legislative Exchange Council, an association of conservative legislators, does something similar. Economist John Cochrane summed up the strategy thus:

Fix the tax code…Lower marginal rates but eliminate the maze of deductions…Most of all, remove the profusion of regulation and…government management of the economy.

All of this seems to present society with a basic choice— shrink government and increase growth, or embrace redistribution and regulation in exchange for lower prosperity.

Economic theories have often sought to enshrine this trade-off in math. The basic theory of supply and demand, taught to every introductory economics student, shows that government policies like taxes and price controls create distortions that reduce overall welfare. Nobel-winning theories of the business cycle have reached the same conclusion. Economist Arthur Okun wrote an entire book in 1975 about the supposed trade-off between equality and inefficiency. In that book, he famously likened redistribution to a leaky bucket, carrying wealth from rich to poor while leaking some onto the ground.

This story seems simple and intuitive. But it might be wrong.

There are certainly cases where the same policy changes that produce faster growth lead to greater inequality. A classic example is China, where liberalization of private ownership and trade led to rapid industrialization, allowing a few industrialists to get enormously wealthy. But economists Markus Brückner and Daniel Lederman find that in rich countries like the U.S., the correlation typically runs in the other direction – nations with more inequality tend to experience slower growth, not faster. The reason, the economists theorize, is education – countries that make bigger investments in the skills of their populations end up performing better economically, and the growth is more evenly distributed. Other economists have found similar results.

There are other ways that big government can increase growth and equality at the same time. Economists have long been aware of the existence of public goods – things that the private sector chooses not to provide because it’s hard for companies to capture the profits. National defense and basic research are classic examples, but infrastructure, education, child care and even health care also probably have some aspect of public goods – which is probably why we see governments taking a big role in these areas in rich countries. It’s notable that developed nations tend to have more government spending than poorer ones.

And public goods might not be the only policies that can boost growth without increasing inequality. Recent evidence suggests that giving workers more representation in corporate boardrooms can boost investment and wages.

Meanwhile, the free-market growth strategy has produced disappointing results in the U.S. in recent decades. Economists generally believe that President George W. Bush’s tax cuts in the early 2000s had at best a small effect on growth, and possibly none at all. The mid-2000s were certainly a decade of anemic growth and excessive risk-taking before a staggering recession that many attribute to deregulation of the financial sector. More recently, Trump’s tax cuts appear to have failed to give the economy much of a boost. In general, Republican presidents have not seen impressive growth rates during their tenure in office:

All this means that liberals and leftists shouldn't surrender the mantle of growth to their ideological opponents. Focusing on public goods -- education, science and infrastructure – and on aligning the incentives of workers and capitalists will be a much better growth strategy than the old recipe of tax cuts and small government. And if progressives embrace the idea of growth, they’ll be able to make sure that it happens in a way that protects the environment instead of despoiling it.

Some economists are already helping to push thinking in this direction. Economists for Inclusive Prosperity is a network of academics who are working to advance ideas for increasing prosperity in a way that benefits those at the bottom more than those at the top. Democratic politicians would do well to heed these economists.