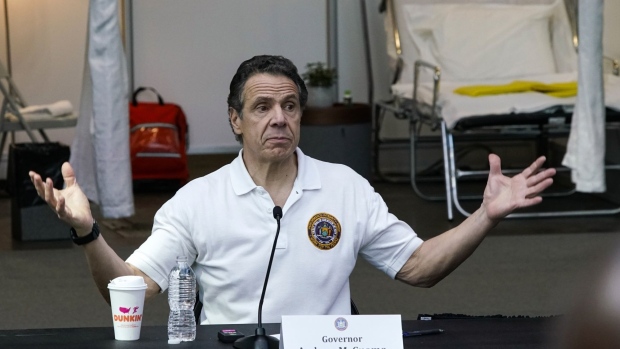 (Bloomberg Opinion) -- Among the critical shortages the coronavirus has revealed is one of a sophisticated vocabulary with which to discuss basic moral questions. It is not as urgent as the shortages of masks and ventilators but it has been just as evident in the news media.

How else to explain the bizarre debate now taking place about whether we should sacrifice our economy to our health, or vice-versa? Those who want to re-open the economy now say that we are putting livelihoods at risk to save a small part of the population, and a part that has disproportionately seen most of its years already. Sometimes they find a class angle: People who can easily work from home, such as pundits, are protecting themselves from tiny risks by forcing real harms on those who can’t. A few people, like Texas’s lieutenant governor, Dan Patrick, have volunteered that they would sacrifice their lives for their countrymen: a stance that might be heroic if it weren’t theoretical.

Those on the other side angrily insist that we shouldn’t abandon grandma for a few points on the Dow. “If everything we do saves just one life, I’ll be happy,” says New York governor Andrew Cuomo. They say that the conservatives who are itching to resume normal life are betraying their allegedly pro-life values.

From the heat of the debate, you might think this question – lives or dollars? – was actually before us. It isn’t. For the time being, at least, there isn’t much of a trade-off. If everyone went to work now, the virus would spread faster and more of us would die or suffer severe and long-lasting bodily damage. (Among the stricken would be people in the prime of life, by the way.) That wouldn’t be good for the S&P 500. Under these circumstances, a lot of us wouldn’t go into work, or ask our colleagues to do it, even if government allowed us.

What makes the debate even more foolish is that nobody actually acts as though they believe that health and other goods can be ranked in some global fashion. Cuomo does not actually believe that any cost is worth paying to save just one life. No health system is or could be designed with that principle in mind, and no government sets speed limits that way. The Catholic Church, well-known for its teaching about the sanctity of life, does not hold that all means to prolong life must be pursued in all situations.

Patrick may be a blowhard, but the idea that he wants to see old people die to his zeal for higher corporate profits is a straw man. When people refer to “the Dow” in this context, it’s not about actual stocks but shorthand for real human goods like the ability to provide for our families and do useful work.

The pro-lifers who want to end the lockdowns are making a mistaken prudential judgment. They’re not hypocrites about being pro-life. There’s no logical conflict between letting people try to climb Mount Everest, even knowing some of them will die, and wanting abortion to be illegal.

Very occasionally one runs into a maximalism that is the mirror-image of Cuomo’s. R.R. Reno, the editor of the religious-conservative journal First Things, suggested that we are showing a faithless fear of death by cancelling football games and dinner parties. The error, again, is to insist that various goods – including health, play, friendship, and religion – need to be ranked in order of importance. But this is impossible to do wholesale, and we shouldn’t try.

All of us, Reno and Cuomo included, have to make retail judgments about trade-offs all the time. When a hurricane is bearing down on a city, it will postpone its games. It’s not thereby saying that life must be preserved at all costs, and its Christians need not hang their heads in shame. So too now. The dinner party can wait.

The vast majority of us understand perfectly well how to make judgments in concrete situations that call for choice without thinking in terms of grand abstractions. The argument we are currently having is so pointless that it seems more like a psychological than an intellectual response to quarantine. We should find better ways to keep ourselves occupied.