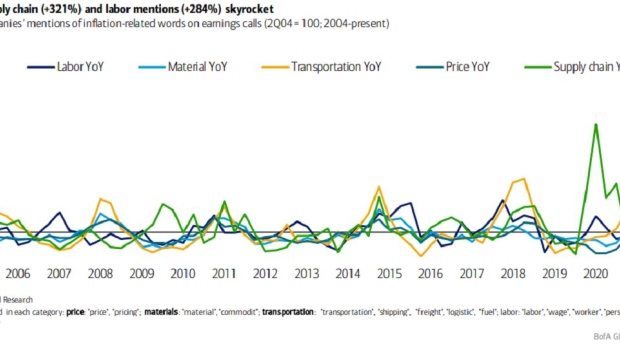 (Bloomberg) -- One bearish case Wall Street strategists and equity investors kept sweating over ahead of the reporting season was a squeeze of profit margins that would hinder the bull market.

Early results for the third quarter suggest that fear is actually premature -- at least for now.

From commodity inflation to supply-chain disruptions and labor shortages, things that threaten to push up costs for doing businesses are indeed piling up. But thanks to robust demand and a rush to cut expenses since the Covid-19 outbreak, corporate America’s ability to wring out from sales has defied all the warnings.

Excluding financial firms, companies in the S&P 500 that announced results have boosted net-profit margins by 40 basis points to 12.4% from the previous quarter, according to data compiled by Bank of America Corp. The improvement has spread across major industries, with all but energy and consumer staples posting better margins.

The data is the latest evidence of corporate resilience that has underpinned a rally that saw the S&P 500 doubling in 19 months. More than 80% of large-cap companies have beaten analysts’ profit estimates during this season, a pace of positive surprises that has persisted in five of the past six quarters -- and never seen before the pandemic.

Partly offsetting any rising costs was a jump in demand that’s expected to boost S&P 500 revenue by 15% in the third quarter. Over the past five years, every 10% increase in sales tended to translate to an expansion of 1.2 percentage points in margins related to earnings before interest and taxes, according to an estimate from BofA.

Throw on top all of the actions that companies have carried out to rein in costs and boost productivity -- digital ordering at restaurants or an app upgrade to attract customers -- and it’s a recipe for better margins.

While profitability has come in better than expected, company managers haven’t let their guard down. During earnings calls, their mentions of labor, the biggest component of costs for doing businesses, almost quadrupled from a year ago. Meanwhile, the discussions on supply chain surged 321%, both picking up pace from the previous quarter, data compiled by BofA show.

Mentions of price -- an indicator that BofA views as a proxy for pricing power -- has risen only 45%, compared with 52% from the last season. To BofA’s Subramanian, the increased focus on labor relative to pricing is a sign that anyone anticipating profit margins to expand in 2022 is likely to be disappointed.

That view put her team in square contrast with analysts who follow individual companies. Based on analysts’ collective forecasts, profit margins for S&P 500 firms will improve in the next two years.

While no one can predict with high confidence on the post-pandemic market, investors are starting to differentiate winners from losers. During the last three weeks, a basket of companies with high pricing power outperformed that of lower pricing power by 4 percentage points, according to data compiled by Goldman Sachs Group Inc. that strip out industry bias.

“It’s going to be a war on margins going into next year -- higher wages, higher interest rates, high input costs nearly across the board,” Matt Miskin, co-chief investment strategist at John Hancock Investment Management, told Jonathan Ferro on Bloomberg TV. “You’ve got to find those companies in those sectors that can have good margins into a tougher year.”

For now, however, a prevailing margin squeeze has yet to materialize on the index level. Separate analysis from Well Fargo & Co. on third-quarter results so far showed a similar trend. Excluding financials, margins have widened by 50 basis points among those that reported.

“Fears of broad margin compression from rising material and labor costs proved to be unfounded during Q3 earnings season to date,” said Chris Harvey, head of equity strategy at Wells Fargo. “Demand and pricing are strong, and margins remain resilient.”