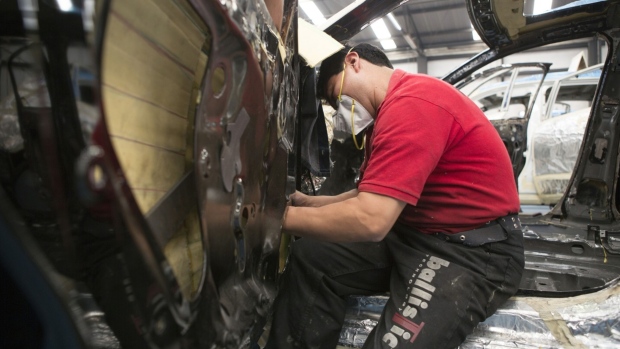 The 2020 Range Rover Sentinel, which debuted in March, contains more than a ton of ballistic steel plate and armored glass inside its body.

It can withstand a pipe bomb exploding from point-blank range and can weather rounds of bullets shot by AK-47s, AR-15s, and 9 mm pistols. Its 510-horsepower V8 engine can ford deep water, descend steep mountains, and sprint at 120 mph—an admirable feat considering that the Sentinel weighs 10,000 pounds, more than twice the weight of a regular Range Rover.

It also has a hatch that allows those inside to escape through the rear luggage compartment, in case the doors should become unusable. Engineered and built by Land Rover’s Special Vehicle Operations team in West Midlands, England, it’s not the first bulletproof vehicle Land Rover has made in-house, but it’s certainly the toughest.

The Sentinel’s release highlights a segment of the automotive industry that often goes unnoticed: the manufacture and sale of armored vehicles. And today, there’s growing demand from consumers willing to spend hundreds of thousands of dollars for them.

“A lot of regions around the world are developing economically very quickly, and defense expenditures are correlating with that, and we have been scaling with it,” says Philip Nadjafov, whose family founded Toronto-based Isotrex in 2005. He says business overseas, especially to fulfill UN peacekeeping and government contracts, has risen precipitously over the last three years. “People are investing in their security.”

While brands such as Audi, BMW, and Land Rover already offer in-house bulletproofing options, it’s the rise of sales by the many private providers across the U.S. that indicates the real profits to be made. No comprehensive data exist for the industry at large, but interviews with many of them have set market growth expectations near double digits, year-over-year, for the foreseeable future.

In San Antonio, Tex., Lawrence Kosub at Texas Armoring Corp., which opened in 1997, is laying plans to open a facility in Central America that can manufacture 200 armored vehicles per year, up from the 50 he now produces annually. In Utah, ArmorMax Chief Executive Officer Mark Burton is working on a government contract to deliver 140 Ford vehicles to various agencies by early 2020. He’s built manufacturing plants in eight companies over the past two decades, and next year, Burton will open an outpost in India.

Some outfits, such as O’Gara Group, have been around for more than 100 years; it was providing armored limousines in the 1940s, when Harry Truman was president—and a client. Others sprouted more recently: Manhattan Armor was founded in New York City in 1979; International Armoring Corporation was founded in Ogden, Utah, in 1993; and AddArmor was founded in Jackson, Wyo., in 2017. They remain bolstered by demand from what feels like every corner of the globe: From Brazil to Ukraine, Nigeria to the Philippines, everybody wants immunity from any imminent threat.

The Current of Change

But where the perennial hotspot is Brazil, and need has been white-hot in Mexico, demand now comes from West African nations such as Nigeria, whose growing economy is the largest on the continent. It’s also coming from the U.S., where outfits such as Texas Armoring Corp. have seen business double. At ArmorMax, the U.S. comprises nearly 80 per cent of business, an inverse flip from 20 years ago. Sales to American clients at the IAC subsidiary have increased eightfold since 1994.

“People are worried about random acts of violence,” Burton says, mentioning he had just spoken on the phone with a prospective private client in Chicago. “They’re the attorneys, they are the doctors, the business executives. They’re worried about their families or their wives being at the wrong place at the wrong time.”

It’s a generalized “unsettled” feeling that has sparked the rise, he adds. “People just want peace of mind as they drive around.”

Most vehicles that have undergone bulletproof treatment endure an invasive process. The outfitter first removes all nonessential components in order to lessen the weight of what will inevitably become a very heavy apparatus. That means pulling out some trim and wiring, carpeting and seats. Then, the sides and pillars of the vehicle are sliced open and stuffed or welded with armored panels, most often made from ballistic-grade steel. A lighter-weight composite material can include special resins, ballistic nylon, and/or Kevlar, such as that found in bulletproof vests.

Along the bottom and sides of the car, special firewalls can be added. A crumple-zone bumper can be added, too, which enables the vehicle to burst through blockades or out of rubble without damaging the radiator and other internal mechanics.

Elsewhere, wheels are made to run while flat by installing polymer donuts where the inner tubes use to be—those will run at 60 mph or so for roughly 50 miles before wearing out. Windows are replaced with “transparent armor,” a one- or two-inch-thick sandwich of plastic poly and leaded glass. The thicker the width, the more security it provides: Two inches get you protection against a single shot from a big-game hunting rifle. Often, the heavier glass requires more-than-routine maintenance: “We have a lifetime warranty on the work we do—but for the glass, we have a 24-month warranty,” Burton says. (The motors burn out the fuses that make the windows go up and down.)

One man in Mexico who asked to remain unnamed for safety reasons had his life saved by just such a windshield: An attacker fired a gun directly at his Mercedes in broad daylight—the damage was merely a cracked window and the cost of replacing it. (“Insurance doesn’t cover the windows,” he says.) Rogerico Pagliari, who lives in Brazil, says the windows of his bulletproof Volvo S70 have never been shot at—but that doesn’t mean they don’t work. “Once, I got in an ambush, and it gave me the confidence enough to gas instead of stopping.”

Sometimes, the goal during manufacture is to make the vehicle look extremely low-key, with no obvious signs that it has been altered for enhanced protection. Unnoticed means unbothered, the thinking goes. Attention creates a target.

“We once had a client request we armor a Ford Taurus Limited,” Kosub says. “You’re talking about a US$40,000 car with US$100,000 worth of armoring on it. But that’s the type of thing that most of our clients who are serious about security really want—something under the radar.”

Other times, the treatment is heralded as a status symbol, complete with flashing lights, bull horns, and sirens. The level of ostentation often depends on the country. What is accepted in Venezuela may not be so applauded in Honduras.

“In Honduras, you need a permit to have an armored vehicle,” says Carlos Flores, the president of Roco 4x4, which supplies components and armors vehicles under a Blindajes Inteligentes, or Smart Armor, division in Honduras. Flores said the nature of the vehicles there has changed as the drug cartels have lost power and the economy has bloomed: Where people once needed high levels of security against military-grade attacks—options that might include smoke screens and systems to electro-shock intruders—now they’re buying more understated options that protect against basic handgun attacks.

Christopher Davis, who owns a bulletproof Audi Q7 in Colombia, said that in Bogota, if they don’t exactly quality as status symbols, armored vehicles do constitute a certain display of power in a region that sustained gruesome violence in a not-distant past.

“It’s really a defensive measure, because people are really still scarred and terrified of the violence that’s now 20 or so years in the past,” he says. “Bottom line is, people don’t have them for no reason. In Colombia, it’s strange to see a nice SUV that’s not armored.”

Many of the “irritating” laws in Bogota—for example pico y placa, or the traffic mitigation strategy of limiting traffic over certain hours and days in urban centers—virtually don’t apply to bulletproof cars, Davis says.

“Plus, the police cannot pull you over, since technically they can’t enter your car without an order from the court,” he says. “And some bulletproof cars have the government status to basically act like police cars, in terms of traffic laws, as long as the emergency lights are on. Usually, you will see security guards following these types of vehicles on a motorcycle.”

Regardless of how flashy—or mundane—the vehicle is on the outside, the primary challenge for those who build them is weight. The lightest touch of armor on a small sedan will add 500 pounds. The world’s fastest bulletproof vehicle may be the Audi RS7 Sportback, which the company claims can hit 200 mph. (That’ll cost US$205,000, if you’re interested.) At the other end of the spectrum, the most advanced level of protection will add 2,500 pounds or more, as it did to that Sentinel.

It’s a tricky balance. Heavier materials are stronger against attack—but then, they’re slower, too. And the force of their weight often requires mechanical reinforcements such as bolstered suspensions and frequent repairs to transmissions and engines. Sometimes, a third hinge will be added onto doors to help carry the bank-vault weight they assume when they’re bulletproofed.

Many of the outfits that armor vehicles advertise their own patented technologies as the lightest-weight and strongest of the lot. They also talk about design.

From offices in downtown Los Angeles and a headquarters in Canada, plus a manufacturing facility in United Arab Emirates, Isotrex makes a Phantom armored personnel carrier with a V-shaped hull designed to disperse any blasts that happen directly underneath its cage. In addition to it thick hull, the unique shape and material composition provide the source of its security.

“It’s about dispersing energy in clever ways that make it even better than just a bombproof car,” says Nadjafov. “These vehicles need to hit certain speeds; it’s about making sure that people get back to their families. That is the main focus behind our design philosophy.”

The weight savings are considerably over the double-your-heft standard of previous generations. But you’ll still be able to feel it from behind the steering wheel. Some armoring companies offer training in conjunction with the vehicles they sell, so that customers will know how to get the best out of their ride—and have a plan for safety, in case of emergency.

“There is a vast difference between [bulletproof and non-bulletproof] vehicles,” says Sean Kealey, who is on active duty in the U.S. Army. Kealey sometimes drives a bare-bones Humvee “as if it were a scout vehicle”—nimble and capable off-road. But the armored Humvees, he says, are much less capable off the beaten path, prone to rollovers and problems with suspension, engine, and transmission stressed from the additional weight: “Of all of the vehicles that we had, the one that struggled the most in the sands in the Arabian Desert was the armored Humvees,” Kealey says.

At least your wallet will be lighter. An armored Toyota Land Cruiser or Mercedes S-Class sedan can start around US$100,000. Prices for serious quality products reach much higher: The BMW X5 Security Plus cost US$144,000 when it debuted at the Moscow Auto Show in 2014; Audi’s A8 L Security cost US$140,000 upon its 2016 arrival; and Mercedes-Maybach’s Pullman Guard cost US$1.6 million when it premiered in 2017. At ArmorMax, the average amount on a purchase ticket is US$150,000, Burton says.

Rover declines to name a price for the Sentinel, its latest ballistic retardant feat, but its predecessor cost €400,000 (US$445,000) in 2015. A rough estimate puts the latest version near a half-million dollars. The underlying hope, of course, is that you’ll never have to put it to the test.