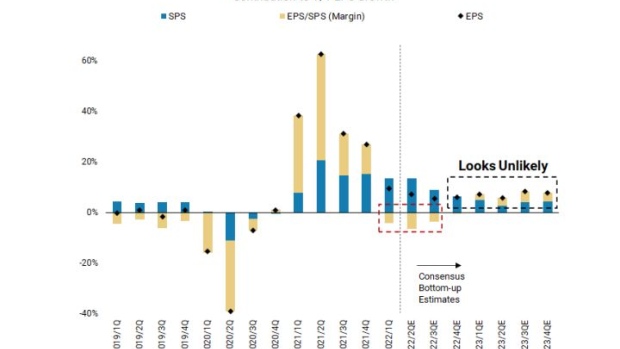 (Bloomberg) -- The post-pandemic market has been a story of surprises, from the Nasdaq’s uncanny resilience and the rise of meme stocks to the sturdiness of profits in the face of inflation.

The latter is a big reason stocks have bounced 12% in six weeks -- company results have avoided predictions for catastrophe, with firms defending margins as prices rose for customers. Now, new research is warning that an equally hard-to-predict hazard exists for profits on the way down, if the tables turn again and inflation begins to fall.

The issue is operating leverage, a measure of the relationship between a company’s fixed and variable costs, which is now weakening from its 2021 high, according to a team of Morgan Stanley strategists including Mike Wilson. The trend threatens to eat into earnings at a time many investors expect to be celebrating should the Federal Reserve succeed at subduing price pressures.

While revenue growth has been strong for most sectors in the recent quarter, operating leverage, which Wilson’s team measured by subtracting sales growth from EPS growth, is negative for most sectors. Morgan Stanley anticipates this trend will continue, even though the consensus view is that margins will expand in 2023, they wrote.

Existing trends in sales and earnings among S&P 500 companies lend credence to the view. After rising roughly three times as fast as sales last year, equity analysts expect earnings to increase 9.6% in 2022 versus an 11.4% jump in sales. For the first quarter of 2023, however, the market expects to see earnings rising more than sales as margins expand.

But receding demand and sticky cost pressures, particularly in labor, make that expansion unlikely to Morgan Stanley. In other words, if a company still has to pay its workers the same rate, but demand for its goods are coming down, its operating leverage sinks.

This isn’t the first time the market was wrong about inflation’s impact on earnings, according to Morgan Stanley. Strong fiscal and monetary stimulus throughout the pandemic fueled a surge in inflation, powering strong earnings for many companies. The opposite will also likely be true, the note said.

To be sure, not everyone is convinced falling inflation will make a big dent in stock prices. While earnings may suffer after periods of declining productivity as inflation descends from its peak, multiples usually rise, implying that stocks prices don’t need to drop, according to Gina Martin Adams of Bloomberg Intelligence. The S&P 500’s price-to-earnings ratio has climbed off its mid-June lows but is still well off its 2021 highs, Bloomberg data show.

Stocks have risen for four straight weeks amid a strong earnings season and as investors speculated that the softer-than-expected July consumer-price reading would make the Federal Reserve pivot to a smaller pace of rate hikes. Some strategists even declared that the bear market is over. But Morgan Stanley’s Wilson, one of Wall Streets most outspoken bears, disagrees.

“It’s premature to sound the all-clear simply because inflation has peaked,” Wilson and his team said in the Aug. 8 note. “The next leg lower may have to wait until September when our negative operating leverage thesis is more reflected in earnings estimates. However, with valuations this stretched, we think the best part of the rally is over.”