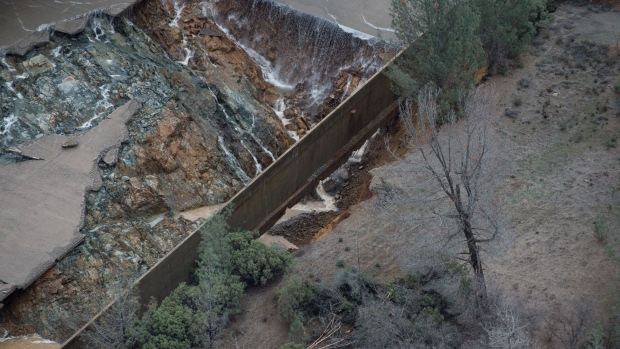 (Bloomberg Opinion) -- European Central Bank President Mario Draghi brought out the bazooka on Thursday, cutting interest rates further below zero and announcing a plan to resume quantitative easing by purchasing 20 billion euros ($22 billion) of bonds a month for as long as it takes to reflate the economy. The response from markets was less than appreciative in yet another sign that investors believe central banks are quickly running out of ideas to stimulate flagging growth.

Markets, though, largely did the opposite of what would be expected when a central bank eases monetary policy. Government bonds tumbled, the euro rose the most in more than five weeks against its major peers and gains in the region’s equities trailed the global market for stocks. Sure, there was probably a bit of “buy on the rumor, sell on the fact” aspect to the moves because the ECB had flagged that much of this was coming. What wasn’t expected was the open-ended nature of QE, which should have been bullish for equities and bonds but bad for the euro. And, in fact, that’s what happened — until Draghi made an admission that no investor wants to hear after explaining how the central bank’s policies have prevented the economy from deteriorating even further. “Now it’s high time for the fiscal policy to take charge,” Draghi told reporters. Bonds immediately reversed their gains, the euro shot higher and the Euro Stoxx 600 Index fell from its highs of the day as investors interpreted the remarks as Draghi admitting that central banks have reached the limits of their abilities to sustain economic growth and underpin markets.

Investors aren’t being overly melodramatic. They are clearly concerned not only about the perpetual inability of the global economy to reach escape velocity but also about the increasing possibility of a global recession, even though major central banks have pumped trillions of dollars into the global financial system. The collective balance-sheet assets of the Federal Reserve, ECB, Bank of Japan and Bank of England have risen to 35.3% of their countries’ total GDP, up from about 10% in 2008, data compiled by Bloomberg show.

EQUITIES WANT TO BELIEVEThe S&P 500 Index rallied on Thursday, bringing it to less than 0.5% from its record closing high in July. But it wasn’t the prospect of more central bank stimulus that excited U.S. traders. Rather, it was a report by Bloomberg News that Trump administration officials have discussed offering a limited trade agreement to China that would delay and even roll back some U.S. tariffs for the first time in exchange for Chinese commitments on intellectual property and agricultural purchases. It didn’t matter that CNBC, citing senior administration officials it didn’t identity, disputed that the White House is considering an interim deal with China. Traders clearly believe that a trade war detente may come sooner rather than later amid signs that the economy is slowing rapidly. The speculation is that President Donald Trump doesn’t want to imperil his chances of being re-elected in 2020 by dragging out the conflict, so any truce — even if it’s far less than a grand bargain — would be desirable. A research note from the Fed last week concluded that the rise in trade conflicts in the first half of 2018 “accounts for a decline in the level of global GDP of about 0.8% by the first half of 2019.” And at an event in London on Thursday, Jeffrey Gundlach, the billionaire money manager and chief executive officer of DoubleLine Capital, put the odds of a U.S. recession before the election at 75%.

INFLATION COMEBACK?The weakness in European government bonds carried over to the U.S, where yields on benchmark 10-year Treasuries rose for an eighth consecutive day. At 1.79%, yields are the highest since the start of August and up from this year’s intraday low of 1.43% on Sept. 3. Optimism over U.S.-China trade talks certainly added to the weakness, but so did a surprising government report on inflation that was overshadowed by the ECB. The Labor Department said the core U.S. consumer price index rose 0.3 percent in August, the first time it has risen by that much for three consecutive months since the 1990s. If the report is a sign that the slowdown in inflation earlier this year truly was “transitory,” as Fed Chairman Jerome Powell has described it, it could call into question the need for further rate cuts as well as the historic low in bond yields. Real yields on 10-year Treasuries, which is the yield after subtracting inflation, fell to negative 0.89% at the end of August, the lowest since 1980, according to data compiled by Bloomberg. Pronouncements that inflation is dead are “just not credible,” Bleakley Financial Group Chief Investment Officer Peter Boockvar wrote in a note to clients after the CPI report. “If we now see a continued rise in good prices, helped by tariffs, alongside stubborn services inflation, low inflation will not be the Fed’s problem.” Instead, it will be the bond market’s problem.

PREMATURE TWEETMoments after the ECB announced further monetary stimulus, Trump tweeted that policy makers there are “trying, and succeeding, in depreciating the Euro against the VERY strong Dollar, hurting U.S. exports.” While the Bloomberg Euro Index did initially drop as much as 1.15%, it quickly erased those losses and rose as much as 0.50%. The bigger loser ended up being the greenback, with the Bloomberg Dollar Spot Index falling as much as 0.36% in its biggest drop in more than a week on the speculation that perhaps the ECB had reached the extent of what it can do with monetary policy. In many ways, the gyration in the world’s two most widely traded currencies was a sideshow to what was happening in emerging-market exchange rates. There, the MSCI Emerging-Market Currency Index soared as much as 0.77% in its biggest gain since June, a direct result of dollar weakness. This is good news for the global economy because every time the greenback lurches higher, doubts grow that emerging-market borrowers will be able to repay the trillions of dollar-denominated debt taken out in recent years. And in a sign that traders think the dollar may have topped out, inflows to U.S.-listed emerging-market ETFs that invest across developing nations as well as those that target specific countries totaled $74.9 million in the week ended Sept. 6, compared with gains of $69.4 million in the previous week, data compiled by Bloomberg show. Inflows total $381.9 million this year, meaning those two weeks accounted for 38% of all money that has poured into these funds in 2019.

OIL TAKES ANOTHER BEATINGIn an otherwise good day for raw materials, with the Bloomberg Commodity Index up as much as 0.57%, the oil market fell for a third consecutive session. West Texas Intermediate futures fell to $55.10 a barrel, keeping prices below their year-to-date average and proving some support to the economy. The declines Thursday followed a report from the International Energy Agency that OPEC and its allies face a significant challenge in managing global supplies into 2020. The IEA said demand for the group’s crude in the first half of 2020 will be 1.4 million barrels a day below its August output as production surges from their competitors, including the U.S., according to Bloomberg News’s Alex Longley. Though an increase in stockpiles has taken a pause for now, growth in other countries, including Brazil and Norway, means that 2020 could experience a significant increase in oil stockpiles and pressure on prices. As an illustration of the challenge OPEC is facing, the U.S. briefly overtook Saudi Arabia as the world’s largest oil exporter in June, Longley reported. “The market is giving up on OPEC+ being able to support the price,” Ole Hansen, head of commodities strategy at Saxo Bank A/S, told Bloomberg News. “They can control production but not demand.” Of all the growing signs of a looming recession, oil is notably absent. Although prices are up about 21% this year, they are down 28% from last year’s peak in early October. This is significant because every economic downturn since 1970 has been preceded by a doubling of oil prices the prior 12 months, pressuring consumer spending, according to DataTrek Research.

TEA LEAVESIt’s generally accepted among economists that if it were not for the strength of the U.S. consumer, there’s a good chance the economy would probably already be in a recession given how fast the manufacturing sector has deteriorated. As such, any data point that provides some insight into the consumer has become even more important than usual, raising the stakes for Friday’s release of retail sales for August and the University of Michigan’s preliminary consumer sentiment report for September. Economists forecast that retail sales among a control group — which are used to calculate gross domestic product and exclude food services, auto dealers, building-material stores and gas stations — rose 0.3% last month after a bigger-than-expected jump of 1% in July. Still, that would just put retail sales growth back in line with the average over the past five years. The University of Michigan index posted a big drop in August, falling the most in six years, to a reading of 89.8 from 98.4 in July. Economists expect sentiment to have stabilized this month, forecasting a reading of 90.8. The thing to remember is that if both these reports come in below expectations, the Fed may feel increased pressure to cut rates next week by 50 basis points instead of the 25 basis point priced in by the market.