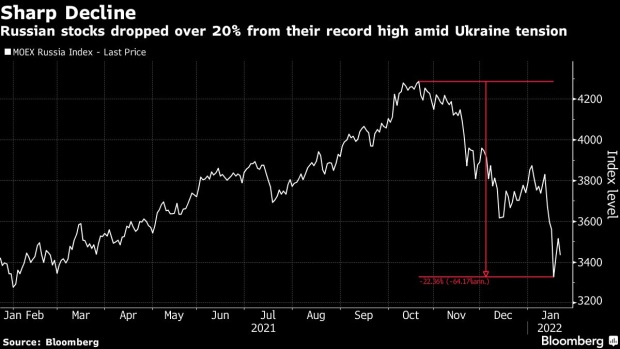 PISKY, UKRAINE - JANUARY 18: Anatoliy, a Ukrainian soldier with the 56th Brigade, in a trench on the front line on January 18, 2022 in Pisky, Ukraine. Negotiations last week between Russian and Western diplomats, who were hoping to defuse the prospect of a Russian invasion of Ukraine, ended inconclusively. In recent months, Russia has amassed forces and military equipment near the Ukrainian border, raising the specter of a possible invasion of the country's east, where separatists have waged a nearly 8-year war against the Ukrainian government. (Photo by Brendan Hoffman/Getty Images) , Photographer: Brendan Hoffman/Getty Images Europe

(Bloomberg) -- Russia’s troop buildup on the Ukraine border is now being cited by strategists as one of the main threats to global markets, even though President Vladimir Putin has repeatedly said he currently has no plans to attack.

Local bond, currency and stock markets in Moscow and Kyiv have already taken a hit, but an escalation could spark a rush for the exits. While penalties against Russian commodities have not been discussed by the U.S. and Europe, a conflict could destabilize natural-gas and wheat prices. Appetite for U.S. Treasuries is growing as some investors shift their holdings into the safest assets.

With European Union foreign ministers due to discuss Ukraine with U.S. Secretary of State Antony Blinken on Monday, here are the main market fault lines to watch:

Though prices have tumbled from their December peak, a flareup in Ukraine could make Europe’s energy crunch longer and more severe. The biggest casualty would be Nord Stream 2, a new pipeline from Russia to Germany that hasn’t yet started operations. Any escalation could spark sanctions on the project, potentially “curtailing flows to Europe for an indefinite period” while pushing prices to new records, Goldman Sachs Group Inc. analysts wrote in a note. Russian gas flows to the continent have been at reduced levels for several months, increasing pressure on abnormally low inventories in the region.

Ukraine’s foreign bonds have lost 7.5% this year in dollar terms, the worst performance in emerging markets after Argentina, according to a Bloomberg index. Notes due in 2033 last traded at or above par in mid-November and the bonds fell in early trading Monday. The hryvnia also fell, weakening to the lowest levels against the dollar in more than a year.

Investors are getting twitchy about Russia’s raw-material exports, with shares in MMC Norilsk Nickel PJSC, Russia’s largest miner, declining almost 5.9% in Moscow on Monday. Analysts warn that any disruption to flows of other metals including palladium, nickel and aluminum could propel prices sharply higher.

Yet cutting off supplies from Russia’s commodities producers risks wreaking havoc on manufacturing supply chains, as the U.S. learned when it imposed sanctions on Rusal in 2018. As aluminum prices spiked and consumers warned of critical shortages, policy makers and company executives scrambled to negotiate a deal to get metal flowing again.

Washington may be keen to avoid a repeat of that saga, and there are no indications that direct sanctions on Russia’s mining giants are on the agenda. Still, traders are also mulling whether any broader sanctions on Russian financial institutions would have a knock-on impact on metal exports priced in dollars.

Morgan Stanley strategists forecast a 27% downside to the MSCI Russia index in the event of a material escalation. Already some of the world’s worst performers, the country’s stocks felt the heat again at the end of last week after a report that Washington is allowing some Baltic states to send U.S.-made weapons to Ukraine. Companies are likely to put any share-listing plans on hold, and wait for prices to recover before doing so.

Russia’s local markets have taken as hammering as the tension increased, prompting the Finance Ministry to cancel last week’s regular bond auctions as yields rose to the highest level in half a decade. At the same time, a rebound in commodity prices has enabled Russia to rebuild its international reserves, which at more than $600 billion provide the economy with a cushion against sanctions.

Wheat futures reached the $8 mark for the first time since December last week amid concern over potential trade disruptions.

Depending on the scale of any military action, the production and export of Ukrainian agricultural commodities, including corn and wheat, could be affected, Warren Patterson, ING Groep NV’s head of commodities strategy, wrote in a note on Friday.

For Russia, any financial sanctions would make trade difficult, which could hit agricultural exports, he said. Russia is set to be the world’s top wheat exporter this season after the European Union. Still, after Russia’s annexation of Crimea, there were no big disruptions in grain flows from the region, and key Ukrainian ports are far from Russia in the Western part of Ukraine. Talk of new sanctions has so far focused on financial sectors rather than commodities.

After their worst start to a year in decades, U.S. bonds have rallied as the tension between Russia and Ukraine spurred demand for the safest government securities. U.S. 10-year yields fell for a fourth straight day after surging last week to the highest level in more than two years. Yields on their German counterparts, also considered havens, followed suit and declined on Monday after briefly turning positive for the first time since May 2019.

‘Why Am I Holding This?’ Saying Bye to Europe’s Negative Yields