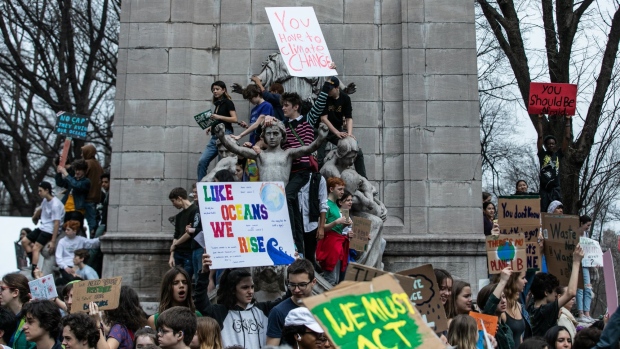 (Bloomberg) -- Slowing the planetary march toward climate catastrophe—and the multitrillion-dollar investment required to do it—has become a central issue of global and national debate. But there’s the equally expensive matter of dealing with the here and now: From historic wildfires to unprecedented hurricanes, global warming has reshaped the lives of millions, with increasingly tragic consequences.

While humans must pay to end the burning of fossil fuels, they must also pay to change how they live, invest and build in a climate-changed world. On Monday, an international commission of government and private-sector officials told countries and corporations that they have 15 months to jump-start reforms aimed at adapting to that changing environment. In 2020, the five-year anniversary of the Paris climate accord, signatories are scheduled to update their national commitments to the United Nations pact.

The Global Commission on Adaptation was formed to help ensure that social and economic systems are hardened to withstand the consequences of climate change. But it was also given the job of publicizing the financial and economic incentives in doing so, namely that there are trillions of dollars to be saved.

Chief among them are avoiding the costs of waiting too long.

Since the 19th century, the world has warmed about one degree Celsius (1.8 Fahrenheit). The 2015 Paris Agreement on climate change set an aspirational upper bound to human-driven global heating of 2 degrees Celsius, with ambition toward limiting it to 1.5 degrees. Four years later, most experts predict global heating will exceed both thresholds.

“Every tenth of a degree rise in temperature matters as impacts scale quickly, even exponentially,” the authors write. “At higher temperature increases such as 3-4 degrees Celsius, it becomes almost certain that we will cross tipping points, or irreversible changes in ecosystems or climate patterns, which will limit our ability to adapt.”

The commission’s proposals address many categories of climate risk, and how different geographic regions will be individually affected. It calls for relatively low-budget improvements, such as early-warning systems for storms, to larger scale construction projects.

For example, disseminating reliable storm information just one day in advance can cut resulting damage by 30%, according to the report; an investment of $800 million might avoid up to $16 billion in annual costs.

Meanwhile, initiatives such as providing small farms with drought-resistant seeds have already increased yields in vulnerable nations like Zimbabwe. And in urban centers such as London, climate-friendly infrastructure has led to enormous economic growth. The primary job of London’s Thames Barrier is to protect 1.3 million people from flooding, the report noted. Without its construction, flood risk would have prevented investments that allowed Canary Wharf to flourish.

“Governments and businesses need to radically rethink how they make decisions,” Ban Ki-moon said at a press conference Monday. “We need a revolution in understanding, planning and financing that makes climate risk visible.”

Critical to the 15-month window between now and next year’s UN talks is what the report calls a “year of action.” It plans to set up pilot adaptation projects to demonstrate how “de-risking” infrastructure plans will both help avert losses and contribute to revenue generation, said Shemara Wikramanayake, a commission member and managing director and CEO of Australian financial services giant Macquarie Group.

“Investment is required in adaptation, given that climate change is on us,” Wikramanayake said. “What we’re keen to do is now use that awareness-building to move on to the next step, which is developing solutions to address the challenges.”

Ginning up projects and financing with official institutions is a crucial goal over the next year, she said, adding that “then we can catalyze greater private investment.”

The new report is meant to bring urgency to incorporating climate risk into virtually everything governments and companies do.

In the Paris accord, each country submitted “nationally determined contributions” stating the cuts they’re willing to make in greenhouse gas emissions, largely through carbon pricing and renewable energy. Much less famously, the pact also pushed nations to set policies governing how they will adapt to changing conditions as the planet continues to warm.

The adaptation commission, managed by the World Resources Institute and the Global Center on Adaptation, was created in 2018 to keep that issue on national agendas.

Readying the world for a new climate reality, however, is in some ways more challenging than slowing global warming itself. Replacing fossil fuels with renewable energy anywhere in the world will help slow global warming. But the best way to adapt to its effects depends on where you live.

“There is no single metric, like a price on carbon for climate mitigation, that applies to all sectors and countries,” the authors write. “Many climate risks are local, so perils and prices will differ by location.”

Heads of state, national agencies and private-sector leaders make up the 34 adaptation commissioners from 20 countries, including developed nations such as the U.K., Canada and Denmark, and developing nations including India, China and Uzbekistan. The U.S., which under President Donald Trump backed out of the Paris accord, isn’t represented.

“Bear in mind that we the developing states are the least responsible for the causes of climate change, but we are the very first victims of it,” said Simon Stiell, minister of climate resilience in Grenada, one of the commission’s convening nations.

On Monday, the commission called for a sweeping readjustment of the global economy.

“Financial resources for adaptation investments will have to come in a coordinated manner from across the entire financial system,” they write.

Productive examples already abound. Two Danish asset managers are working with local communities in 15 climate-sensitive countries in need of adaptation strategies, but with no access to financial services. In Fiji, a 10% tax on the wealthy as well as major luxury items raised almost $120 million for clean energy, disaster relief, reforestation, research and infrastructure in that Pacific island nation. In the U.S., Miami voters in November 2017 approved a $400 million “Miami Forever Bond” program that has already begun funding resilience projects.

Over the next 15 months, the commissioners will seek funding for “action tracks” they said are necessary to prepare people for a Climate Adaptation Summit in the Netherlands in October 2020 and the subsequent UN negotiations. Among the simplest proposals are also the most potent: “Make risk visible.” Once economic actors understand challenges more explicitly, “the public and private sectors can work together to more explicitly price risk in both economic and financial decision-making.”