We are calling for gold to break into the 2,000s for all of next year: Sprott CEO

It’s easy to forget now but there was a time early on in the pandemic when the price of gold was in freefall.

It was a curious thing, what with the virus sparking a collapse in the global economy, and it would prove in time to be one of the great head-fakes in the recent history of financial markets. For the pandemic of 2020 would soon show itself to be the driving force behind one of the most ferocious rallies the gold market has ever seen. At the close of trading in New York on Friday, bullion had spiraled to US$1,902.02 an ounce, some 30 per cent higher than the low it hit in March and just one per cent off a record high set back in 2011.

The virus has unleashed a torrent of forces that are conspiring to fuel relentless demand for the perceived safety from turmoil that gold provides. There’s the fear of further government-ordered lockdowns; and politicians’ decision to push through unprecedented stimulus packages; and central bankers’ decision to print money faster than they ever have before to finance that spending; and the plunge in inflation-adjusted bond yields into negative territory in the U.S.; and the dollar’s sudden decline against the euro and yen; and rising U.S.-China tensions.

All these things, when taken together, have even triggered concern in some financial circles that stagflation -- a rare combination of sluggish growth and rising inflation that erodes the value of fixed-income investments -- could take hold across parts of the developed world.

In the U.S., where the virus is still raging and the economic recovery is stalling, this debate is growing louder. Investor expectations for annual inflation over the next decade, as measured by a bond-market metric known as breakevens, have moved higher the past four months after plunging in March. On Friday, they hit 1.5 per cent. And while that remains below pre-pandemic levels and below the Federal Reserve’s own two per cent target, it is almost a full percentage point higher than the 0.59 per cent yield that benchmark 10-year Treasury bonds pay.

The main driver behind gold’s latest rally “has been real rates that continue to plummet and don’t show signs of easing anytime soon,” Edward Moya, a senior market analyst at Oanda Corp., said by phone. Gold is also drawing investors “concerned that stagflation will win out and will likely warrant even further accommodation from the Fed.”

U.S. bond markets have been a driving force behind the rush to gold, which is serving as an attractive hedge as yields on Treasuries that strip out the effects of inflation fall below zero. Investors are looking for safe havens that won’t lose value. 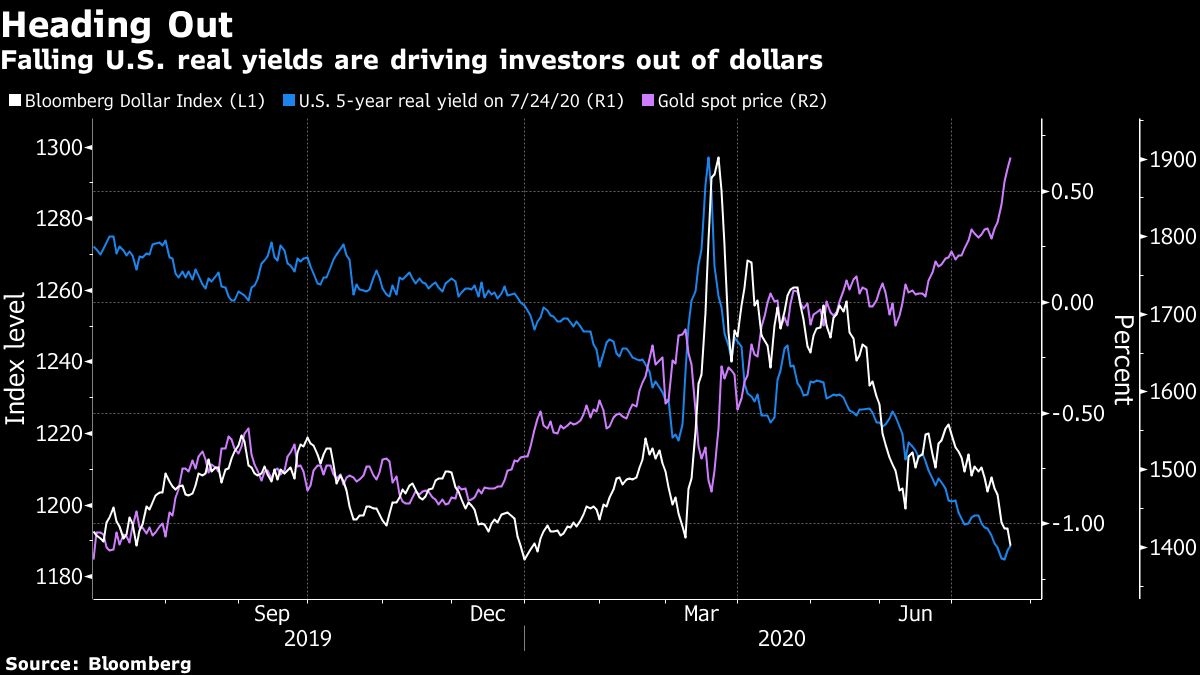 The mania for gold right now has trickled down to Main Street. Retail investors have helped put ETF holdings backed by gold on track for an 18th straight weekly gain, the longest streak since 2006. Meanwhile, gold posted its seventh weekly gain on Friday, and analysts don’t expect the increases to end anytime soon.

“When interest rates are zero or near zero, then gold is an attractive medium to have because you don’t have to worry about not getting interest on your gold,” Mark Mobius, co-founder at Mobius Capital Partners, said in a Bloomberg TV interview. “I would be buying now and continue to buy.”

Analysts have been predicting huge upside for gold for several months. In April, Bank of America Corp. raised its 18-month gold-price target to US$3,000 an ounce.

“The global pandemic is providing a sustained boost to gold,” Francisco Blanch, BofA’s head of commodities and derivatives research, said Friday, citing impacts including falling real rates, growing inequality and declining productivity. “Moreover, as China’s GDP quickly converges to U.S. levels helped by the widening gap in COVID-19 cases, a tectonic geopolitical shift could unfold, further supporting the case for our US$3,000 target over the next 18 months.”

Bank of America’s bold prediction was made after gold prices initially dropped in March as investors sought cash to cover losses on riskier assets. Prices quickly recovered after a surprise cut to the Fed’s benchmark rate and signs that the economic toll of the coronavirus would lead to massive stimulus efforts from global governments and central banks.

This isn’t the first time gold has gotten help from central bank stimulus programs. From December 2008 to June 2011, the Fed bought US$2.3 trillion of debt and held borrowing costs near zero percent in a bid to shore up growth, helping send bullion to a record US$1,921.17 in September 2011.

The crisis a decade ago was all about banks, said Afshin Nabavi, head of trading at Swiss refiner and dealer MKS PAMP Group, who nows sees gold “pointing towards US$2,000.”

“This time, to be honest, I do not see the end of the tunnel,” he said, at least until U.S. elections in November.