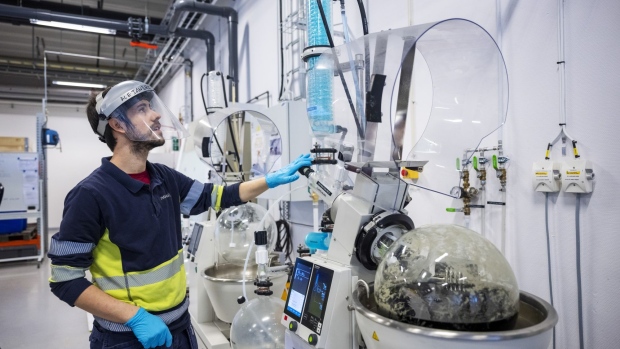 A worker operates a crystallizer machine at the NorthVolt AB Labs research and development center in Vasteras, Sweden, on Tuesday, Feb. 15, 2022. Sweden's Northvolt is leading an effort to forge a regional champion that can beat rivals from Asia. , Bloomberg

(Bloomberg) -- This past fall, one of the busiest investors in climate technology wasn’t a blue-chip venture capital firm or a specialist decarbonization fund. It was a Swiss conglomerate that makes circuit breakers, light switches and electric car chargers.

ABB Technology Ventures, the investment arm of ABB Ltd., was among the most active financiers that collectively put $10.7 billion into climate tech businesses in the third quarter, according to clean energy research group BloombergNEF. It’s an unusual name to top this list—and its executives say the heavy spending will continue.

Investing in the sector is “certainly becoming more and more of a focus,” said Andreas Wenzel, ABB’s head of corporate strategy and mergers and acquisitions. “I would expect it continues.”

ABB has cut 10 checks to startups totaling $100 million in 2022, a record sum for the industrial giant that only invested $250 million over the prior 11 years. Earlier investments were mostly in robotics or industrial automation. More recently, ABB has looked for startups to supplement its business making electric vehicle charging equipment. And it’s branched into software — last month, ABB backed Tallarna, a British data analytics firm that helps companies manage energy projects.

European industrial companies like ABB are racing to curb their greenhouse gas emissions and deal with the continent’s energy crisis. Early in the pandemic, industrials saw a surge in demand as factories, power plants and other customers, short on labor, sought to automate more of their operations. But inflation and a slowing economy has dampened that growth, and fed an urgency to find new markets, said Omid Vaziri, an analyst with Bloomberg Intelligence

There are few more promising markets now than electric vehicles and renewables. ABB is still a minor player next to big funds and the oil and gas industry. Still, the Swiss company is getting involved in larger deals. In July, ABB was part of a massive $1.1 billion financing round into Swedish battery-maker Northvolt AB.

Wenzel said more later stage deals like this will come. He described the investment strategy as producing “VC-like returns.” Yet, unlike venture capitalists, ABB’s primary interest is in scouting companies that it can partner with or eventually buy.

“We are never investing purely with a financial mindset,” Wenzel said.

Andrew Stuart, the chief executive of Hydrogen Optimized, described the deal more as a corporate marriage than a financial investment. “In our case, it’s one plus one equals 800,” he said. “It’s just phenomenal.” (Stuart said ABB has a minority interest in his firm and a board seat, but he declined to share the investment details.)

In 2020, ABB replaced its CEO and has since been on a restructuring tear, shedding fledging divisions and moving deeper into the mobility sector. It’s soon set to spin out electric vehicle charging units worth $2.6 billion. “Clean tech investment is absolutely the place to be,” said Vaziri, the analyst. “The danger is that ABB could fall behind peers in capturing this opportunity.”

ABB isn't the only industrial conglomerate trying to become a clean-tech heavyweight. In November, SE Ventures, the investing arm of Schneider Electric SE, announced its second €500 million fund for startups in industrial automation and climate tech. Like ABB, it’s already backed companies in electrification, hydrogen and energy management software. It has a “good, solid pipeline” of new companies for its second fund, which starts next month, said Amit Chaturvedy, managing partner for SE Ventures.

Most investors welcome this insurgence from the stodgy corporates. “It’s great that we’re seeing it in climate,” said Sarah Hinkfuss, a partner with Bain Capital Ventures. “It’s increasing the size of the tent.”

But there’s a concern that big companies might lock startups into exclusive agreements when they they invest. Sometimes simply taking money from a corporation can cause startups to lose out on partnering or selling to  competitors of their investors, said Hinkfuss. “This can jeopardize their positioning as Switzerland.”

Both ABB and SE Ventures said they don’t hamstring companies this way when they invest.

Hydrogen Optimized wouldn't say whether its recent ABB deal around green hydrogen production is built on an exclusive arrangement. But Stuart, the CEO, said the market opportunity working with ABB far outweighs any downside of the association with the Swiss industrial giant. “It’s not an issue for us,” he said.