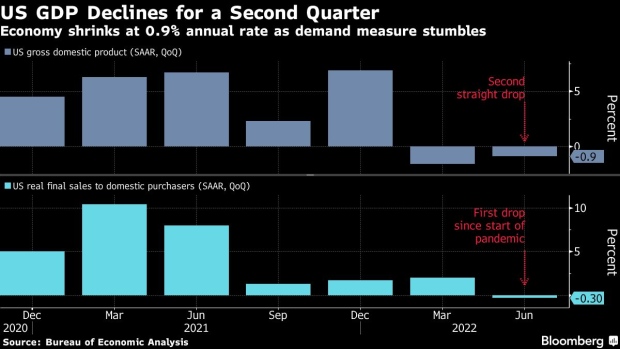 NEW YORK, NEW YORK - JULY 28: A man pauses at a Brooklyn bus stop on July 28, 2022 in New York City. The Commerce Department said on Thursday that the nation's Gross domestic product (GDP) fell 0.2 percent in the second quarter. With two GDP declines in a row, many economists fear that the United States could be entering a recession. (Photo by Spencer Platt/Getty Images , Photographer: Spencer Platt/Getty Images North America

(Bloomberg) -- About 69% of Americans think the US economy is getting worse, the highest since 2008, according to an ABC News/Ipsos poll.

Three months before mid-term Congressional elections, only 37% said they approve of how President Joe Biden is handling the economic recovery, unchanged from June.

The gloom comes despite significant job growth and a rock-bottom unemployment rate, which has been offset by inflation running at the highest level in decades. The US economy has contracted for two quarters.

Just over one in three of those polled, or 34%, said they approve of Biden’s handling of gasoline prices. That’s risen by 7 percentage points since June as pump prices fall.

Ahead of the Nov. 8 elections, 75% of Republicans said they were enthusiastic about voting versus 68% of Democrats and 49% of independents.

Almost half said they would be more likely to support a candidate who would keep access to abortion legal. The number in favor of the opposing stance was 27%.

The poll for ABC News/This Week with George Stephanopoulos was conducted Aug. 5-6 among 665 adults. It had a margin of error of plus or minus 4.2 percentage points.