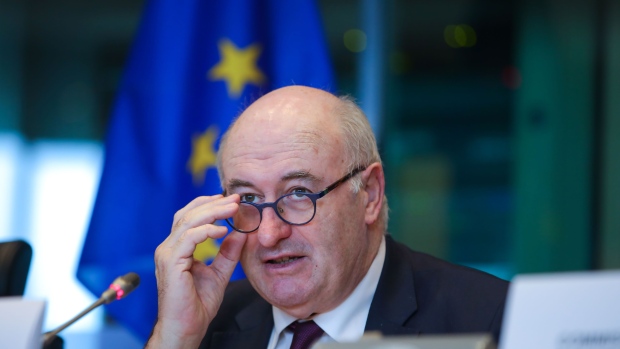 Not a good time for two rounds of golf. , Bloomberg

(Bloomberg Opinion) -- Playing a round of golf in the middle of a pandemic is hardly a good look for a politician. But playing two games and attending a formal dinner with around 80 guests, as swathes of the Irish political establishment did earlier this month, is bound to provoke outrage — not least in a country where official Covid-19 guidelines limit most indoor events to six people. With public trust in authority already fraying, several high-profile political heads have rolled amid “golfgate.”

The crisis spilled over onto the international stage with Wednesday’s resignation of Phil Hogan, the Irishman who held the job of trade commissioner for the 27-country European Union. Commissioners don’t often quit their five-year posting in the Brussels bubble, and, when they do, it’s usually over bigger things (like accusations of fraud). Still, the drip-feed of revelations on Hogan’s other movements in Ireland, as well as his defensive tone and dithering over whether to apologize, evidently became too much for Hogan and his boss, European Commission President Ursula von der Leyen.

The worry now is that the Commission will be left weaker by turmoil stemming from losing the EU’s top official on trade at a critical time — from the tit-for-tat tariff spats with Donald Trump to the need for a post-Brexit trade deal with Britain. Hogan leaves big shoes to fill as someone with experience negotiating complex trade agreements and the Brussels machine, even if Covid-19 and an election year in the U.S. haven’t been conducive to trade breakthroughs. (Hogan’s short-lived pitch for the World Trade Organization’s top job was also an unhelpful distraction.)

Replacing him is a headache both Dublin and Brussels could have done without: If mishandled, it might lead to a wider Commission reshuffle that would rob Ireland of an influential role and potentially hinder EU policymaking at a critical moment for managing the coronavirus and Brexit.

There are also some bigger questions about accountability that need to be settled.

Hogan’s resignation busts the myth that top EU officials — frequently painted by euroskeptics as unelected bureaucrats — are immune to censure once they leave national capitals and reach Brussels. But it was pressure from Ireland that set the tone here. Without the ire in Dublin and extraordinary attacks on Hogan from the Irish government, the story probably wouldn’t have ended the same way. (In the U.K., for example, advisor Dominic Cummings kept his job despite breaking the rules.) This could set a messy precedent if it opens the Commission to too much national pressure in handling perceived breaches of its code of conduct requiring integrity, responsibility and ethical probity.So while Hogan’s actions look hard to defend, the Commission would do well to arm itself with more independent tools for evaluating potential ethical breaches, such as an ethics oversight body, as advocated by Alberto Alemanno, a professor of law at HEC. That will enable it to come out of this scandal stronger, even if some disruption will always be hard to avoid.

This has surely been the costliest round of golf in the EU’s history. With luck, Hogan might be replaced without too much drama. But it’s in everyone’s interest to make sure the long-term effects of “golfgate” aren’t worse than its immediate fallout.