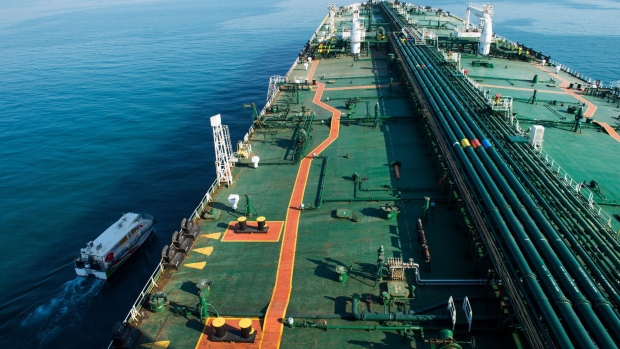 To outsiders, the oil trade of the day is so astonishing that even President Donald Trump sounded flabbergasted when he described it.

“There’s oil all over the oceans right now. That’s where they are storing oil; we have never seen anything like that,” Trump said this week from the podium of the White House. “Every ship is now loaded to the gills.”

With oil demand in freefall, traders are resorting like never before to using the world’s fleet of supertankers as temporary floating storage facilities, filling them with millions of unsold barrels until better times. It’s an unusual trade, but one that’s among the most lucrative around right now, just when everyone on Wall Street struggles to make money.

From the coast of Singapore to the North Sea, the tankers are starting to slow down, ready to drop their anchors, holding crude the world economy doesn’t need as fuel demand plummets due to the coronavirus outbreak. And more tankers probably will be needed, as oil supply still runs well above demand.

“The world is overproducing oil at a historic rate,” said Robert Hvide MacLeod, the head of Frontline Management, one of the world’s largest operators of supertankers. “Land-based storage is limited and selling out fast. Storage on ships will be the only solution.”

What Trump didn’t say is that the most intriguing facet of the floating storage trade is just how profitable it is. In the industry, it’s often described as a money printing press: traders buy oil on the cheap, and immediately sell their cargo forward in the futures market, locking in a chunky profit -- with very little risk. Before oil prices rallied on Thursday on talk of an OPEC+ output cut, traders were easily able to lock-in a 20% annualized return on their money.

Out of hundreds of supertankers in the world, large numbers of them are being hired not for their primary purpose -- shipping crude from A to B -- but to store oil amid a lack of space in shore tanks.

Marco Dunand, the co-founder of top oil trading house Mercuria Energy Group, estimates that 250 million barrels of crude and refined products are already on the water, either as floating storage or waiting to be discharged because refineries can’t accept more crude right now.

“The excess is pushing itself into the water,” he said. 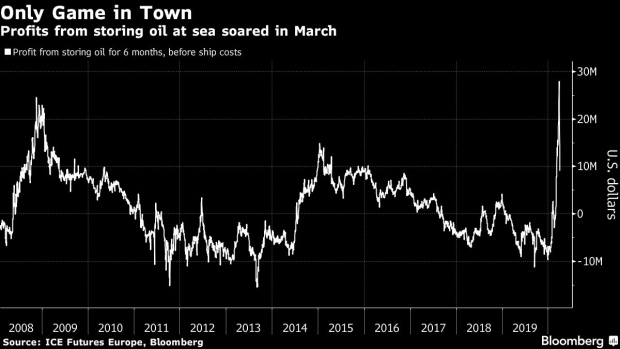 Far from being a problem, the floating storage is a money maker for some in the industry: the commodity trading houses and the shipowners.

The oil market has flipped upside down, with the cost of a barrel of oil today far below what the market is willing to pay in, say, six months or a year. It’s what traders call a contango market. As oil is cheaper today than in 2021, a trader can buy crude now, put it on storage, while simultaneously selling in the forward market, in effect locking in the price difference between the different dates. As long as the contango is wide enough to cover the cost of storage, finance and insurance, the transaction is profitable.

Ben Luckock, co-head of oil trading at merchant Trafigura Group, said the oil industry was pumping “a commodity that the world doesn’t need,” forcing crude into non-traditional storage: the tankers.

“The problem for crude oil is fast coming. We need more contango to pay for non-traditional types of storage,” he said.

Earlier this week, the six-month contango in Brent market, a gauge of the economic viability of floating storage, widened to a record of $14.46 a barrel, surpassing the peak set in the 2008-09 crisis, when oil demand briefly plunged.

The floating storage game is the territory of the most sophisticated oil merchants, including little known names outside the petroleum industry like Vitol Group. Commodity trading giant Glencore Plc has hired the Europe, the world’s largest oil tanker, to store crude. In the past, others have also played the contango, including Koch Supply & Trading, the in-house trading arm of the billionaire Koch brothers, and Royal Dutch Shell Plc.

The traders aren’t the only ones making money. Shipowners are racking up exorbitant fees. Two years ago, the daily price of a standard supertanker, known as very large crude carrier, or VLCC, was about $18,000 a day. This year, one owner managed to get a record of more than $400,000 a day.

“There’s been a huge interest in storage and that’s helped to lift freight rates,” said Halvor Ellefsen, a tanker broker at Fearnley’s A/S. “The bottom line is that everybody in the shipping market is acutely aware of the contango, and the profits it can give traders.”

The glut, almost entirely caused by the demand collapse emanating from Covid-19, is a disaster for the wider global oil industry though. While the traders and the shipowners profit from the contango, Trump is eager for Saudi Arabia and Russia to work together to roll back production in order to lift prices and protect the jobs of workers in the U.S. oil industry.

With Trump pushing Riyadh and Moscow to act, the contango has narrowed, endangering the profitability of the floating storage trade. But it’s far from over. Even if the OPEC+ alliance cuts production by 10 million barrels a day, as Trump suggested, it won’t be enough to offset the drop in demand, which most executives say is far bigger than that.

“According to our numbers, even this 10 million barrels cut, in the second quarter we may well see a stock building over 15 million barrels per day,” said Fatih Birol, the head of the International Energy Agency.

With onshore tanks filling up every hour, every day, every week, the oil will have to flow onto the water -- into the very same tankers Trump talked about. It’s doing so already at record pace.