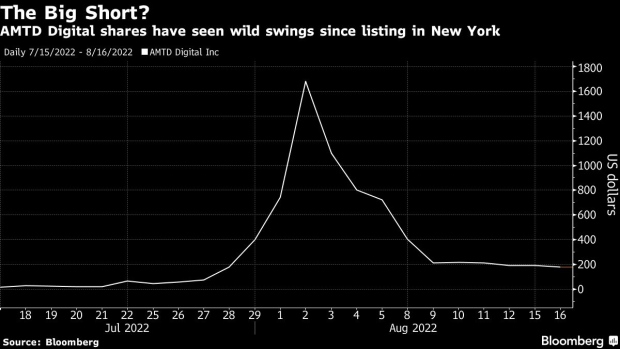 (Bloomberg) -- By any conventional measure, AMTD Digital Inc. is one of the world’s most overvalued stocks.

The barely profitable Hong Kong financial services firm trades at more than 400 times its latest fiscal-year earnings, compared with about 6 times for Goldman Sachs Group Inc., according to Bloomberg-compiled data. Even after tumbling more than 90% from its peak in early August, AMTD Digital’s 2,221% gain since listing in New York five weeks ago rivals GameStop Corp.’s surge at the peak of meme-stock mania.

One analyst has called AMTD Digital -- whose leader is appealing a ban from Hong Kong’s securities industry -- “the mother of all shorts.”

Yet ask professional short sellers about the stock, and they’re more likely to say it’s incredibly risky to bet against. AMTD’s tiny free float and low turnover makes borrowing shares prohibitively expensive for short sellers, while its extreme volatility could wipe out bearish positions in an instant.

“As a professional short seller, you want to stay a mile away from this,” Soren Aandahl, whose Blue Orca Capital is best known for betting against companies based in China and Hong Kong, said in an interview. “It’s so enormously volatile that it’s really dangerous.”

That reticence helps explain why AMTD Digital -- little-known even within Hong Kong financial circles until its eye-popping gain -- is still valued at more than $30 billion, making it bigger than about half the companies in the S&P 500 Index.

With stocks like GameStop and Bed Bath & Beyond Inc. climbing once again, AMTD Digital offers a stark reminder that seemingly irrational gains can last far longer than one would expect even in the age of meme investing. That’s partly because shorting the stocks is so risky, a lesson that hedge funds including Melvin Capital Management have learned the hard way.

AMTD Digital has been raising eyebrows across Wall Street after a mysterious rally that exceeded 32,000% at its peak. At one point the company was worth about $400 billion on paper, more than the likes of Goldman Sachs Group Inc. and JPMorgan Chase & Co. Other newcomers from Hong Kong or mainland China have also posted similarly inexplicable gains, catching the attention of US regulators.

AMTD Digital hasn’t returned multiple requests for comment. It said in an Aug. 2 statement titled “Thank you note to investors” that it’s monitoring the market for any trading abnormalities and doesn’t know of any “material circumstances, events, nor other matters” that could be affecting the stock price.

Market observers interviewed by Bloomberg have been baffled by the move. Tellimer Ltd. became the first and sole brokerage to initiate coverage of the company, according to data compiled by Bloomberg, assigning it a sell rating on Monday in a report titled “AMTD Digital: The mother of all shorts.”

While the gains in AMC and GameStop were fueled by by a coordinated effort among retail investors to squeeze short sellers, Tellimer analyst Nirgunan Tiruchelvam said AMTD “seems to be a very curious case.”

AMTD Digital’s short interest as a percentage of shares outstanding is less than 0.1%, according to Markit data. One big deterrent for bears is the excessively high cost of borrowing the stock to sell it short. AMTD Digital’s IPO prospectus lists revenue from contracts with customers of just $21.5 million and profit of $23.9 million for the ten months ended in February.

As of Monday, investors needed to pay an annualized interest rate of 900%, according to Blue Orca’s Aandahl. That compares to about 1% for companies with large market capitalization.

Only about 10% of AMTD shares are available for trading, limiting the pool for investors and making the stock susceptible to wild swings.

(Adds a TV clip. An earlier version of the story corrected price-to-earnings ratio for AMTD Digital.)